For Roger Smith, playing music is all about the feel. When the spirit moves him, his fingers fly wildly around the keyboard like a tarantula on speed. “With classical players, every finger is perfectly aligned, but mine look like an uncoordinated spider crawling around,” he jokes. But make no mistake: The 72-year-old musician knows exactly what he’s doing. He’s just too modest to say so.

Most know Smith primarily as a member of the legendary R&B/ funk band Tower of Power, the horn-heavy Oakland-based ensemble that first found fame in the ’70s with such hits as “You’re Still a Young Man” and “What Is Hip?” He’s also the band’s lone Sacramentan. But there’s much more to his story. Before joining T.O.P. in 1999, the keyboardist and Hammond B-3 master had done stints with such musical heavyweights as Gladys Knight, Willie Nelson and Leon Russell. Along the way, Smith has also done a ton of solo projects (his current band is Jazz Rosco), opened a winery and survived cancer.

A friendly sort, Smith welcomed me with a warm smile and a quick hug when I arrived for our interview at the Land Park home he shares with his wife, Kathleen (and a dog and cat). Here are some highlights from our chat.

Where did you grow up and how did you get into music?
I was born in Dallas—my entire family tree comes from Texas. My folks moved out to California when I was 4 or 5. So I’m basically 95% Californian.

My interest in music started when I was about 11 years old, after my folks left the Fresno area and moved the family to Sacramento. Some friends of mine in the neighborhood, the McGriffs, were relatives of Jimmy McGriff, the famous organist from Philadelphia. The McGriffs had what I knew of then as a church organ—a Hammond B-3. When Jimmy would come to town, he’d stop by and play. I had never heard a church organ sound like that. It didn’t sound like “church music” [chuckles].

So I was taught my first two songs by the late Jimmy McGriff. That’s kind of where it all
began.

Did you get formal training after that?
My mom was a devout Christian and wasn’t gonna have that “heathen” music in her household, so I took lessons. That lasted maybe one year. Lessons and formulated theory training just wasn’t in my nature. So at that time I didn’t really play music; I just kinda goofed around on the organ in church.

When did you get more serious about music?
I got drafted, and at the end of my tenure in the service I was in San Antonio. There was a Special Services department where a lot of the kids would go over and jam. I hung out there all the time, and it was then that I started getting more serious about music. Fast forward, I was honorably discharged, came back to Sac and got a call from one of the kids I used to hang out with in Texas, asking me to join his band. I thought he was BS-ing me, but he sent me a $500 Western Union wire transfer and airline tickets to Austin. So I packed my little duffel and flew down to Austin. That’s where I started the group Blind Melon, and among the players in that band were a young Eric Johnson [legendary Texas guitarist] and bassist Roscoe Beck. Our band was opening shows for a bunch of groups: the original Mahavishnu Orchestra, Cold Blood, ZZ Top, others.

All of this led to my very first-ever pro gig, with [blues guitar legend] Freddie King. His organ player was sick, so I knocked on the door of opportunity and said, “I’ll play.” The gig didn’t last long, maybe 10 days. But it was an eye-opener for me in the beginning of my career.

Who did you work with next, pre-T.O.P.?
Things started changing in Austin and LA started calling, so I came back to California. When I moved back out here, Gladys Knight was the biggest thing that happened to me. That was the true start for me—the real beginning of my career.

The Gladys connection came from my friend [the late] Stan Lunetta, who was taking the Sacramento Symphony to the Concord Pavilion to back her up. The pianist that was with the symphony definitely wasn’t a Gladys Knight-type piano player. Great pianist, but no R&B, no soul. So Stan called and said, “You wanna do this?” And I just happened to know every song Gladys ever did. So I went and played in the pit at the Pavilion. That led to a tour with Gladys.

Before Gladys, I had another career-changing opportunity when I joined the “Soul Train” [television show] house band, Sunbear. It was damn good fun and a hell of a band. But it was short lived—about a year.

Your career was on fire. How did you make that happen? Was it just a matter of working hard at your craft, or something more?
That’s a good question. A lot of it, as I’ve learned over the years, has to do with the way you carry yourself, your personality—even over musicianship. If the vibe is right, they’ll give you a shot. I’ve met a lot of musicians who played their asses off, but they came in the door like they forgot Elvis left the building. And the people who were checking that out went, “Oh boy.” Because if you’re gonna be out on the road with somebody, the last thing you want is Mr. or Ms. Diva.
You’ve been with Tower of Power nearly 25 years now. What has this experience
been like?
I’ve always loved this band—loved them forever, long before I joined the group. But being with a group that is, in my opinion, iconic, and to get on stage with a band that’s doing what no one else is doing, with a sound no one else can replicate—well, that has changed my life.

There is also consistency in this band, and that’s a blessing. Right now, we’ve got a full tour schedule for 2022, and we’re already going into 2023. It’s that kind of security, as opposed to these bands that are “hot now, cold tomorrow.” Tower sits right here. 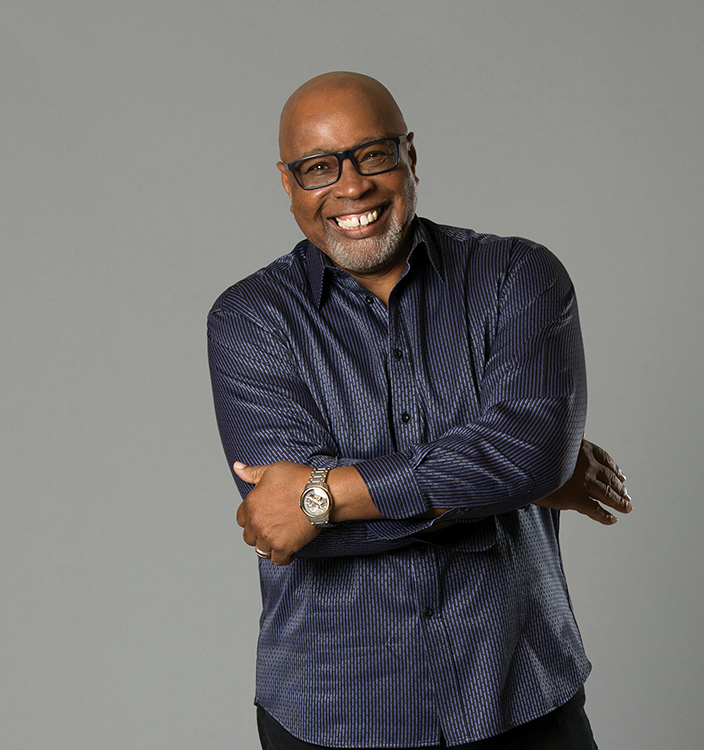 T.O.P. celebrated its 50th anniversary in 2018 and is still touring worldwide and reaching younger audiences, too. That’s pretty amazing. What else might surprise us about T.O.P.?
When we get on a tour bus, it’s like a rest home on wheels—it’s hilarious. But once we get up and get our joints oiled up, we hit the stage and we give it our all. I think that’s what surprises people. With this band, you won’t get backing tracks, you won’t get fake this or fake that, or somebody pressing a button to make something sound good. What you hear is what you get. It’s the real deal. One hundred percent. And it hasn’t changed.

I think that’s what a lot of people don’t know about T.O.P.: that we are working hard to pass on the honesty and the purity of music.

Despite your chockablock schedule, you somehow found time to start Bump City Wine Company, with a clever nod to the title of T.O.P.’s second album. Tell me about that.
Wine is a passion, just like my music. I’m blessed with having a dear friend as my partner, Mike Smolich. He’s retired but was previously the boss/CEO of a few companies, and we’re both wineheads; we love wine. We launched the company in 2014 with our flagship, Bump City Red. We’ve now got 10 varietals.

When the idea came up to do this, I thought, “This is great. But retailing? And learning about the rest of this stuff? I don’t have time.” So I told Mike he had to be the boss. Somebody has to be. What am I gonna do if I’m in Australia [on tour]? Somebody’s gotta be here handling the details. So Mike was left to figure out the bottles, the corks, our licensing. . . . It was a lot of work. My thing was, and is: I’m the face of this company; I’m the personality. And that’s the beauty of our partnership. And the company has grown.

The synergy between the music and the wine is huge. We’re now working on doing a series
of concerts in 2023 at the Old Sugar Mill, where the tasting room is located.

Looking back on your life, what are some of the biggest lessons you’ve learned?
One big lesson I learned is get over yourself. When I was a young musician, I was cocky. So much was happening so fast, and at such a level. I’ll be honest: I was running to S.F., going to North Beach Leather and buying myself leather outfits, thinkin’ “I’m Billy Preston . . . I’m that guy.” I went there. So get over yourself, you know? And do your best. Just aspire to be yourself.

Laugh at B Street