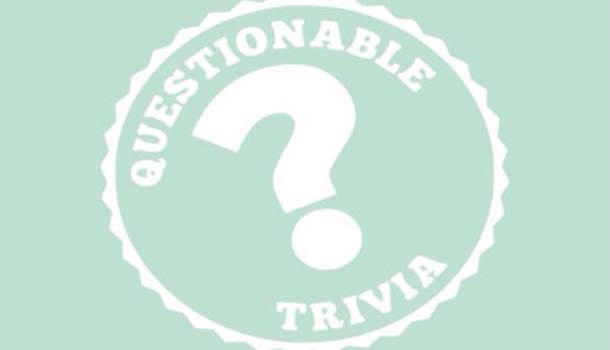 Do you know the lyrics to every Beatles song by heart? How about the name of the dog that Russia shot into orbit during the space race? Or what “apiology” is the study of?

You’re in luck: Your useless knowledge can be put to work. At the cozy Easy on I bar and grill on Thursday nights, charming quizmaster Matt Russell, owner of Questionable Trivia, rattles off ever more challenging questions relating to the night’s three categories, typically broken up by two rounds of specific topics, which change every week, and one catch-all round of general knowledge.

If your trivia knowledge is heavily stacked in one specific area, fear not: Fans can suggest topics for rounds, and you can assemble a crack team of up to six people.

On a recent trivia night, a picture round of classic Hanna-Barbera cartoons kicked things off, followed by general knowledge and a round dedicated to all things Boston, in honor of a trivia night regular who’s moving to the city.

The Hanna-Barbera round left more than a few of the teams desperately trying to tap into their youthful memories to put a name to the pictures of the characters—Most of the tables in the packed house ordered a shot from the bar just to get the two hint advantage that comes with the purchase.

After a boisterous hour of cheers and beers, Russell tallied the scores. The returning trivia champions were dethroned, and a new victor was crowned to thunderous applause.

It’s not just the trivia that makes Questionable Trivia the best option for bar trivia in Sacramento—although it is a favorite of trivia nerds for the quality and range of the questions—Russell is also a comedian, and his witty remarks tend to leave the audience rolling with laughter, even when their team is losing.

If midtown isn’t your scene, Questionable Trivia also hosts trivia on Tuesday nights at The Blind Pig in Carmichael and Old Town Pizza and Tap House in Elk Grove.

For more information, go to facebook.com/QuestionableTrivia.