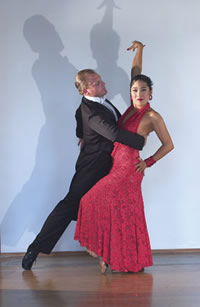 How do they do it? That’s the question that came to mind when we heard about four Sacramento women who work full time and in their off hours lose themselves in interesting and unusual hobbies. Where do they get the oomph to take on a second activity after putting in a full day at the office? Turns out the one thing they have in common also is the thing that gives them added energy: A passion for what they do.

Shall We Dance? | By day, Grace Kato Stewart is an unadorned, mild-mannered civil servant.

By night, she applies theatrical makeup and false eyelashes, slips into a blood-red gown and becomes a ballroom-dancing diva.

Stewart, who works full time as a public land management specialist with the California State Lands Commission, was introduced to ballroom dancing more than a decade ago, while a student at California State University, Sacramento. “My mom said, ‘You should take ballroom dancing,’” recalls Stewart, who replied that she didn’t really want to dance with “those old people.” By the end of the second class, she was hooked.

It wasn’t long before Stewart and her partner, David Stewart, whom she met in dance class and later married, got serious. The couple traveled to San Francisco weekly for lessons in the International Latin style of ballroom dance; they practiced what they learned at night on CSUS’s tennis courts, using the facility’s coin-operated lighting. “We would throw in money, and the lights would come on,” she says. “It was pretty crazy.” They finished fourth in their first competition.

Stewart and her partner—they are no longer married, although she says he is still her best friend—turned professional last April and have changed their dance category. “We are currently dancing American Smooth,” she says. “But we have competed in every style possible.”

When she is not practicing at the Ballroom of Sacramento with David for a competition or exhibition, Stewart is there teaching a limited number of students. And she couldn’t be happier. “I love my job,” she says of her state service. “But I am definitely consumed by dancing.”

Tending Tiny Trees | She is a clinical cardiologist with her own practice in Auburn, the medical director of Women’s Cardiovascular Health at Sutter Medical Center, Sacramento, and the principal investor for the National Registry of Myocardial Infarction. She is the medical director of the Progressive Care Home Health Agency and is on the editorial board of Women’s Health in Primary Care. She also is the mother of 2-year-old twin boys.

With all of these responsibilities, how does Diane Sobkowicz, M.D., find time for a hobby?

When that hobby is bonsai, the ancient art of growing dwarfed trees and shrubs in containers and developing them into aesthetically appealing shapes, it makes sense. Sobkowicz, whose husband presented her with her first bonsai as an anniversary gift more than 10 years ago, says this is an activity that allows her time from her hectic schedule for relaxation and reflection. “Medicine can be very fast-paced,” she says. “The bonsai makes you slow down.” Weather permitting, Sobkowicz tends some 60 bonsai trees outside on specially built stands.

Bonsai is an intricate art form with prescribed techniques. To be successful, it is imperative that these ornamental plants look natural and never show the intervention of human hands. “I am not a master at bonsai,” Sobkowicz admits. “But I enjoy it and learn from it. It allows you to see nature and life in a different way. You learn how resilient nature can be and at other times how fragile.”

Into Africa | LouAnn Kelsheimer is crazy about cats—wild cats, that is. And for the past few years, this 33-year-old Sacramento resident leaves her job as sales coordinator for Monarch Roofing during the spring and fall to escort small groups of people on 11-day safaris to the wilds of South Africa.

This labor of love was born out of Kelsheimer’s volunteer work with Wild About Cats, a nonprofit group based in Auburn that rescues the likes of bobcats, tigers, cheetahs and African lions from almost certain death. “There is a big exotic pet trade in the United States,” explains Kelsheimer, who points out that people buy wild feline cubs at auction to keep as pets but give them up when the animals become unmanageable. The organization also takes discarded cats from zoos and theme parks.

Wild About Cats organized Kelsheimer’s first safari, which benefited some of South Africa’s grass-roots conservation projects. It was a life-altering trip. “I fell in love with South Africa,” she says. “When I’m there, I have an overwhelming sense of belonging.”

Today, Kelsheimer arranges the same fund-raising safaris through her own company, Prowler Safaris. Twice a year, she takes groups of five or six people to Johannesburg and then on to the 6.5-million-acre Krueger Preserve, where they learn about wild-cat conservation firsthand by observing nature up close and in action.

When asked if she ever gets scared out in the vast stretches of wilderness, with only a native guide for protection, she says, “No. A wise Zulu bushman once told me, ‘If you follow the laws of the bush, you will be safe.’”

Red Voodoo Brings It Back