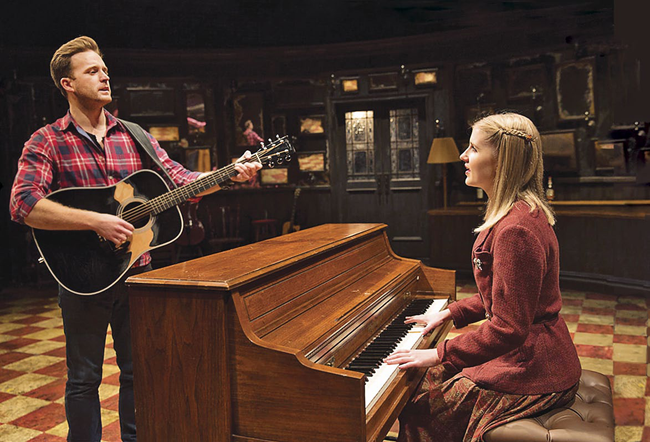 Like many musicals, “Once” started as a movie—and a really good one, thanks mainly to powerful musical performances by its co-stars, Glen Hansard and Markéta Irglová. The chemistry between them, musically and otherwise, was so intoxicating— they reportedly fell in love during the shoot and subsequently became a couple—that I scoffed at the idea of an onstage adaptation, thinking it couldn’t possibly live up to the film.

But then “Once” hit Broadway and became the hottest ticket of the season in 2012, winning eight Tony Awards including Best Musical. So despite my skepticism, I went to New York to see it— and within minutes of curtain time, my skepticism was gone. It’s a great show, and it’s a big deal that it’s coming to town for the first time this month, part of the Broadway Sacramento series at the Community Center Theater.

A few more facts about “Once”:

Guy meets girl. It’s a “guy-meets-girl story” with a musical twist, about an Irish singer/songwriter/guitarist who is about to throw in the towel on his dreams—until he meets her. She’s a Czech immigrant and also, conveniently enough, plays piano. Duo, anyone?

Smart, not sappy. One of the show’s strengths is its smart, clever script. The dialogue is often fast and quick-witted. Though it has its tender moments, it’s not sappy.

Concert or play? You be the judge. Because “Once” is all about the music, it sometimes feels more like a concert than a play, especially since the actors are the musicians. But with riveting songs (most written by Hansard and Irglová) like “Falling Slowly” (which won an Academy Award) and my personal favorite, “When Your Mind’s Made Up,” who’s complaining?

“Once,” a Broadway Sacramento production from California Musical Theatre, will be performed April 14–19 at the Community Center Theater, 1301 L St. in Sacramento. Tickets are $22–$99. For more information or to purchase tickets, visit californiamusicaltheatre.com or call (916) 557-1999.