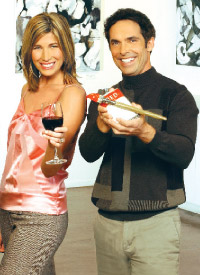 Every month, Second Saturday performs a cultural magic act: By combining such popular pastimes as people watching, wine drinking and gallery hopping, it transforms art appreciation from a heavy dose of educational vitamins into a dessert buffet.

Essentially a year-round series of progressive parties that run from 6 to 9 p.m. or later, Second Saturday is when a number of area art galleries—in downtown, midtown, uptown (home of Del Paso Boulevard’s “Phantom Galleries”) and, more recently, in East Sacramento, Fair Oaks, Folsom and Carmichael—hold meet-greet-and-sometimes-eat receptions to herald the opening of new shows.

Which is not to suggest that the second Saturday of every month is always the actual opening night for an art show. Savvy gallery owners also host private receptions for their regular patrons a few days prior to Second Saturday to give serious collectors some face time with the artist and a chance to purchase art in a leisurely manner. Savvy consumers, meanwhile, know that if they drop by some of the galleries on the afternoon of Second Saturday, they can get a jump on what occasionally becomes a buying frenzy a few hours later.

“Second Saturday was one of those events that became instantly popular,” says Lynda Jolley, whose late gallery, Big Art (which was housed next door to her late hair salon, Big Hair), was one of the earliest participants. She is now the co-owner, with art consultant Beth Jones, of Jay Jay, an East Sacramento gallery that displays art in a traditionally spacious museum style (as opposed to a jam-packed retail setting). Jay Jay takes part in Second Saturday every other month; this month, it’s featuring the work of Mary Warner, a painter and graduate of California State University, Sacramento, who now teaches art at the University of Nevada, Las Vegas.

“We feel more comfortable doing Second Saturday six times a year instead of 12,” Jolley says, “because sometimes the crowds can be overwhelming. Don’t get me wrong, we love them and welcome them—but it’s not always the best time to develop a longer-term relationship with a collector. On the other hand, I can think of several people who’d never heard of us until they dropped by our gallery on a Second Saturday and ended up either buying something that night or coming back and doing so a few days or even weeks later.”

Second Saturday was the brainchild of the late Michael Himovitz, who owned a now-legendary art gallery downtown on 10th and K streets. For a short while, he opened a more retail-oriented version in the Pavilions shopping center with partner Chuck Miller. His final exhibit space, in an expansive building on Del Paso Boulevard, helped spur the creation of the “Phantom Galleries.” Many of these were (and are) housed in vacant buildings whose landlords were convinced—by Himovitz, developer Bob Slobe and then-city councilwoman Kim Mueller (who is now married to Slobe)—that by filling the structures with art, they would generate some upscale traffic for, and hence revitalize, the area.

Himovitz, who had started out as a developer, possessed “an absolute eagle eye for spotting artistic talent, more so than any gallery owner,” says D. Oldham Neath, director of the Tower Framing and Design Gallery (located on the second floor of the Solomon Dubnick Gallery at 2131 Northrop Ave.). She says that Himovitz could walk into a huge show like the annual juried Crocker Kingsley exhibit “and just zoom in on the best and the brightest. That’s how he found Miriam Davis [a renowned clay artist who also is a painter] and dozens of people who ended up showing exclusively at his galleries.”

Neath was Himovitz’s assistant for several years. She later ran the Thomas A. Oldham Gallery at 18th and L streets and, for seven years, Archival Framing, with partner Sheri Watson, at 11th and R streets. She was present at the creation of Second Saturday—or rather, its benevolent theft.

“Michael was very candid about the fact that he stole the idea for Second Saturday” from Portland, Ore., which had made (and continues to make) Second Thursday a huge event for galleries and restaurants. In 1992, Himovitz convinced the owners of three downtown art galleries, all within a few blocks of each other—the Weintraub Gallery, the aforementioned Big Art and Neath’s Archival Framing—to host opening-night receptions on the same night of the month.

“Originally, Second Saturday was an ‘art walk,’” Neath says. “We created a map. Some of the restaurant owners would even donate hors d’oeuvres because they were so excited to see people meandering from gallery to gallery.” Armed with glasses of cheap wine—none of the gallery owners pretended it was otherwise—the roving patrons “could see some great art, run into their friends and make the streets come alive at a time when there just wasn’t very much to do downtown after dark,” she says. As more galleries began to participate, and the pedestrian commute became more strenuous, the Sacramento Municipal Utility District ran a free shuttle back and forth among the galleries, a practice it finally discontinued for budgetary reasons.

Alan Osborne, who owns the Art Foundry Gallery at 14th and R streets, says that while Second Saturday doesn’t always prove to be a one-night revenue blowout, that’s all right. If he’s a little more sanguine about the situation, it may be because his 15,000-square-foot gallery at 1021 R St. also houses the downtown area’s only working bronze- and metal-casting plant. On every Second Saturday, regardless of the weather, he oversees a 7:30 p.m. “pour,” which has attracted audiences as large as 700.

“The nice thing about Second Saturday is that it’s become a destination unto itself,” he says. “People come dressed in every kind of outfit imaginable. If they’re heading to a play or a fancy dinner afterward, their clothes may reflect that. If they’re just going from gallery to gallery, they might be wearing jeans or, in the summer, tank tops, shorts and flip-flops. It doesn’t make a bit of difference to anyone. In Sacramento, the standard mode of dress can be summed up as: everything.”

Rare among gallery owners, Osborne also is a working artist who’s had solo shows of his bronze sculptures in Mexico, San Francisco, Washington and Colorado in addition to Sacramento. He also has created large installations or monuments for the BART station at San Francisco International Airport, the State Capitol, the local Embassy Suites, the Davis Senior Center and Reno Airport, among others. A longtime college instructor, he has been on the faculty of Cosumnes River College for the past six years.

“Second Saturday has made Sacramento a true destination every month,” he says. “I like the fact that not only collectors come to the shows but also other artists, to support each other. I really like this city because of that. And I think when people come to Second Saturday, even if they’re not involved in the arts, they sense the energy and enthusiasm of the area.”

On a recent Second Saturday, despite the gloom of an especially glutinous seasonal fog, several hundred people churned their way through the dense chill to participate in—with apologies to Damon Runyon—the capital city’s oldest permanent floating craft game. The crowd was a mixture of the newly affluent, torpidly wealthy, eking-by daters and, yes, parents with kids.

From there, they could head to Del Paso Boulevard, where they’d encounter such uptown stalwarts as The Artisan Gallery (1901), Gallery Horse Cow (1409), Center for Contemporary Art (1516), 1001 Del Paso Works (its name is its address) and Doiron Gallery (1625).

In East Sacramento, they could drop by the newly transplanted Elliott Fouts Gallery (4749 J St.) and hang around to visit such new Second Saturday participants as Serendipity Boutique (5362 H St.), Francesca’s Italian Art & Antiques (just across the street) and a bevy of salons, spas and cafes that have decided to take the plunge. Even farther east, they could visit an increasing number of galleries in Fair Oaks and Folsom.

And if Second Saturday and all it has to offer simply weren’t enough, intrepid art lovers could hit the streets a day earlier and head across the Yolo Causeway. That’s when a collection of galleries in the city of Davis hosts Second Friday. It’s an idea that one gallery owner confesses he stole from Sacramento—which, as we now know, stole it from Portland. All of which proves one of two things: A good idea has many authors or, as Oscar Levant once wrote, “Imitation is the sincerest form of plagiarism.”