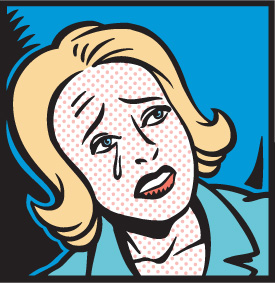 It’s a crying shame, but there’s one in every office: a whiner, a saint and somebody like me, a crier. With 52 years of hanky experience under my belt, I can spot a fellow tear addict a boo-hoo away.
My advice? Don’t be that person when you’re at work.

I’m not talking about crying over astonishing beauty or puppies or a movie. No, you know what I’m talking about—the teary scenario that plays out all too often, from the paneled boardroom of NBC’s “The Apprentice” to your own workplace. A supervisor (of either gender) approaches us. Discussion gets a bit pointed. Perhaps our judgment or performance is questioned. We turn defensive, burst into embarrassed sobs, and others will never look at us the same.

The first time I cried in a professional situation, I was 19 and one of those impossibly bright, shiny faces working at Disneyland. My boss offhandedly mentioned that, at 6-foot-1, my fantasy of playing Snow White was a fairy tale in itself. Well, of course he was right—a Disney princess doesn’t tower over her prince. But my boss was perplexed at why I’d cry over the simple fact of my height. He avoided me for a week.

My fatal flaw: tears, a natural yet unacceptable outlet in the professional arena. Yes, I can try to spin a softer side: I’m not weak, I’m passionate! Yet many view waterworks as a death knell, a detriment in the business world that scorns the “emotional woman” stereotype. “Let’s face it,” says one female school administrator, “our male counterparts don’t cry . . . they stalk out or maybe pound a fist on the table.” Anger equates strong feelings, while crying is “weak” and therefore unprofessional.

An informal survey of about 50 local women ignited several heated arguments about tears in the office and the women who shed them. Bringing up the subject quickly divides “those who have” from “those who haven’t,” with the haves unfurling stories that justified their tears, and the have nots defiantly squaring their shoulders in a refusal to admit any warranting circumstances.

And there are countless possible circumstances. Some of those 50 women admitted crying over everything from ribbon-cuttings to watching other women fight in the office. While discussing an upcoming business calendar, Sara sobbed at the thought of her cancer-stricken mother possibly not living to see a future event. “But my co-workers immediately jumped in to take over my responsibilities, mistakenly thinking that I was crying because I was overloaded and couldn’t ask for help,” she sighs. Likewise, another woman dreads the familiar sting of tears during weekly staff meetings at her nonprofit organization, saying, “It never fails. . . . I feel them coming on whenever our soulless CEO circles the table and pounces on people.”

I know the feeling. The silent sliding of a tear down your face, you pretend to read something, and the tell-tale waterspot is evidence. I never know what might cause those tears to spring forth. Life happens, and feelings surface unexpectedly and perhaps inappropriately, whether you’re at a business luncheon or rushing toward an important meeting with clients who wonder why you sniffle and wear sunglasses on a late winter afternoon. Indeed, many a woman has cried in her office, usually fleeing to a bathroom or her car to let the dust settle and avoid condescending pats on the arm and awkward silences. Keep those tears under wraps lest we totally lose control.

On the other hand, we must also worry about the flip side of the Kleenex: how to give as well as receive in dealing with misty co-workers. One self-professed “weepy woman” describes her most hated job, one as a receptionist, as the “front face who was too often puffy-eyed and red-nosed.” The problem, she says, is that her trickle of tears usually became a torrent after others offered sympathy because she felt even more humiliated with the extra attention. “And once you get that attention, you’re branded for life,” observes dry-eyed Danielle. “Nobody at work really wants to know my problems. That’s what my friends are for!”
So when is it OK to cry in the office? That’s a tough call. Much ballyhoo has been made over the females of “The Apprentice,” who successfully united as an all-woman team yet crumbled with co-ed reshuffling. One contestant, Ereka Vetrini, was specifically booted for coming unglued while managing a challenge. Rather than basking in the celebration of newfound celebrity, she’s found herself constantly battling the “emotional” label that cost her the opportunity to advance. “I never cried in front of a colleague or a client. I never cried at work, ever,” she has declared in numerous interviews that reflect her embarrassment at being “fired” before 20 million viewers.

Whether Vetrini sobbed or not is a moot point because the mere hint of tears immediately sunk her boat with The Donald. In fact, several other “Apprentice” women were surprised to find themselves defending their emotional stability much more often than their decisions to flaunt their sexuality for business gains. The message is loud and clear: You can wear short skirts, but don’t wear them and a short fuse at the same time, or any time, for that matter. While the guys stay calm and collected, we women drop like flies amid rumors of lost composure.

Back to my 50 friends. Both the haves and have nots agree that introducing tears into a business relationship changes the level of professionalism. Once bosses see your eyes brim over, everything grinds to a halt in a fumbling for tissues, perhaps a mumbled apology, and a lack of eye contact. It’s rarely good news to see your boss breathing a huge sigh of relief while scurrying from the room to avoid your swollen eyes and wondering about your monthly cycle. How exactly do you honor your feelings in such a 9-to-5 balancing act?

While your intuitive, sensitive nature may have secured you the job in the first place, showing too much of those traits can be deadly. I know a few teary women who think long and hard before working for supervisors who demand a mask of constant, never-cracking strength. Think back over your résumé and ponder the “ice queens” you’ve known (or been) during your career. If they’re looking repulsed at a woman crying before them, it’s probably because they never intended to hire somebody so emotionally fragile in the first place. Why, a crying woman can be a bigger threat to the powers that be than missing that once-in-a-lifetime meeting because of unexpected traffic! Tears do not compute in an environment that thrives on logic, organization and working together with controlled emotions.

Some bosses hate tears because they can’t fathom why they’re caused and don’t want to guess. After all, in the bleakest scenarios, crying may be symptomatic of violence, harassment or substance abuse. Given increasing threats of liability, it’s no wonder that human-resources folks set up a protocol for managers to report incidents denoting human frailties. Plus, crocodile tears may be suspiciously viewed as a manipulative tool to gain control or force a desired decision. Confides one male state worker, “Given the choice, it’s going to be a lot less stress for me to hire somebody who won’t cry versus somebody who will and then make me feel guilty about it because I can’t solve their problem.”

Perhaps the most scientific stamp of approval comes straight from the medical establishment, an astounding tear-ally given its reputation for emotional restraint. In a 2001 study, researchers discovered that more than three-quarters of all medical students at Yale cried due to emotional patient-related interactions. And while many respondents concealed their sobs or felt isolated because of crying, evaluators deemed the tears a valuable part of their curriculum in molding sensitive, conscientious future doctors.

But what might be construed as compassion in a bedside manner doesn’t go as far in a cubicle. One of the more vocal victims of her own tears is Penny, who tells several stories of bosses who either ignored or manipulated her after she let her guard down in two specific cases. Once, as a lieutenant in the U.S. military, she was passed over for advancements after weeping before a stoic captain who then subsequently tiptoed on eggshells around her. And later, as an administrator for a national health organization, Penny tearfully bared her soul before a supervisor who then used the intimate knowledge to question her professionalism.
“Tears make you vulnerable and can label you as a woman who walks around with a bull’s-eye on your face,” says Penny today. “It doesn’t seem to matter if your boss is a woman or man. . . . Do whatever you have to do to the inside of your cheek and choke those tears back.” Maybe it takes an unlearning of a certain reflex or behavior, and be glad for any backup plan that excuses you from a prickly, damp situation.

In the chick flick A League of Their Own, a baseball coach played by Tom Hanks reacts in horror to a female player who cries because she has made a costly error on the diamond, declaring, “There’s no crying in baseball!” As anybody who watches the World Series winners knows, that isn’t true, and nobody can guarantee that somebody won’t cry in your next business meeting.

If they do, think about offering an ear as well as a tissue. Maybe the only real way to dam up tears in the office is to become more understanding rather than more detached. I don’t remember the last time someone cried merely for the sake of crying, especially in the workplace where we strive to keep on our armor. That said, maybe you don’t have to keep the Kleenex in full view on your workstation, but what’s the harm of having a box in your desk drawer? And make sure you know the quickest route from the boardroom to the bathroom, just in case.

But don’t tell anyone.