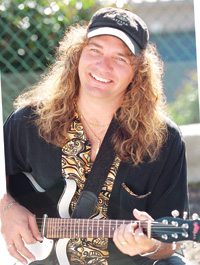 The paparazzi haven’t pounced on him yet. But to the many kids who love him, Music Mike is every bit the rock star.

You’d think it was the Second Coming of Elvis—or maybe Barney in the flesh.

Instead, it’s Music Mike, a mellow sweetheart of a guy who turned his back on a life of hard rock (and hard knocks) to pursue another passion: performing for preschoolers.

“You know what’s fun about what I do?” asks Mike, who is cheerfully fielding questions between bites of fish and chips one winter Wednesday at the Big Dip in Folsom. “When I walk in, it’s like a rock concert: Everyone’s like [raising his voice]‘MUSIC MIKE!’ It’s kind of fun to go to work when everyone’s excited to see you. And when I’m done, I always get a ‘Thank you’ and ‘Have a nice day.”

That’s because kids just can’t get enough of Mike, says Elaine Howard of the Joy of Children preschool in Folsom. “Children love preschool, but they really love ‘Music Mike Day.’ I don’t know anyone who doesn’t love Music Mike.”

Mike’s real name is Mike Grmolyes (pronounced “Grm-ah-lee-us”; “it’s Yugoslavian”), which doesn’t quite have the same ring as Music Mike. At first glance, he’s a card-carrying member of the peace-and-love generation, with long, wavy hair and an easy smile. He brings his dog, Cookie, everywhere he goes. “She knows half of this is for her,” says Mike, pointing to his plate of fish and chips. Cookie, who is parked outside on a leash for the duration of the interview, is as sweet as her owner. She waits patiently and never barks.

These days, Mike doesn’t have much to bark about, either. Instead of hustling for club gigs and working dreary day jobs—as many musicians do, as he once did—he’s found the joy and freedom that come from coloring outside the lines. “I don’t work all day long five days a week, and I get to do what I love,” he says, smiling. Typically, Mike works in the schools Wednesdays through Fridays from around 9 a.m. to 12:30 p.m., and spends Saturdays on the birthday-party circuit. Otherwise, you can find him helping his wife around the house, cooking, hiking or “just kicking back.” Cell phones and computers aren’t part of Mike’s world. “I’m real outdoorsy,” he says. “I like spending time in nature.”

Although he was born and raised in the Los Angeles area, Mike had plenty of time to nurture a love of nature during his teen years, when he lived in a series of small towns in the Pacific Northwest. “My parents divorced when I was, like, 12,” remembers Mike, who is now 41. After the divorce, Judy Perry moved her four sons (Mike is the oldest) to Seaside, Ore., then north to Washington, back to Oregon and eventually to Willows, Calif., where Mike graduated from high school. Moving around “was kind of a drag,” admits Mike, “but at the same time kind of fun, because we got to live in a lot of different places and got to know a lot of different people.”

One of those people was his uncle, Jim Wilson, a classical guitarist and his first musical mentor. Music runs through the family bloodline, explains Mike. “My grandpa was an orchestra director, Grandma was a choir director, Uncle Jim teaches at the American Conservatory in Paris, and my Aunt Martha is a great folksinger. My mom’s family was all musical.”  His mom played flute in high school, he says. “But then she started having babies.”

Uncle Jim not only taught him a few licks, but also bought Mike his first electric guitar—a Gibson Melody Maker. “I had been playing the bass for maybe six months,” recalls Mike. “But once I got the [electric] guitar in my hands, it was all over.”

Mike became what some might affectionately call a music geek, dedicating himself to honing his chops. Rock ’n’ roll became a way of life. He loved listening to records by his favorite artists, including the Rolling Stones, the Beatles and Cream. But even more, he loved to play.

“I always had a band in high school, and then when I got out of high school, I was always in a band,” he says. At 19, Mike became a father, which easily could have meant hanging up the guitar for good. Instead, he took his young daughter with him and gave the L.A. scene a shot.  “We were really going for it,” he says, referring to his old band, Sniper. Mike was the front man, “writing the songs, playing lead guitar, singing—pretty much everything.” They played the Troubadour and other big-name clubs. “I have a lot of good memories,” says Mike. “It was fun to be in that scene.” But eventually, Mike decided it wasn’t the scene for him.

“It was kind of against my nature,” he reflects. “I kind of like to be left alone.” When he started doing his own version of “Unplugged” on the pier at Redondo Beach, he heard his future calling. “I liked being out there on my own, singing to the crowds,” he says. After leaving L.A. and moving to Sacramento in 1989, Mike shopped his solo act to new places, including retirement and nursing homes, where he staged singalongs.

Little did he know he was at the wrong end of the demographic stick. The seniors loved him. But the children knew better, as children often do.

It was during a camping trip, Mike recalls, that they let their wishes be known. “I was sitting out there playing my guitar, and all these kids came up to me and wanted me to play ’em songs,” he says. “So I sang a couple of songs, and we did a Pied Piper thing where they were following me around. That’s when it clicked in my mind that I could do something for the kids.”

Seventeen years later, Mike is still taking his cues from the kids. “It’s kind of funny,” he says, “but they’ve taught me what they’ve wanted. They tell me what kinds of songs they like. . . . They kinda tell me what’s going on.”

Mostly, he says, they want familiar tunes (like “The Cat Came Back” or “Old MacDonald”), and the fewer words, the better.

“Kids at this age (preschool) don’t like a lot of lyrics—they like a verse that repeats over and over again, one that sticks in the head, real simple. If you can help them to get that beat and give them a simple melody, that’s all they want.”

But there’s more to all of this than just churning out songs, which is why he calls it “teaching.”
“It’s music and movement, so I’m working on a lot of different skills in a half-hour’s time,” explains Mike, who currently teaches at schools in Folsom and Granite Bay. “It’s not just performing—it’s not like a concert for adults. You can’t get away with that with these little guys. They wanna move.”

And how. After finishing our interview, we head over to the Joy of Children, where more than 40 little faces light up when Mike hands out a roomful of rhythm instruments. They shake maracas and bang tambourines. They clang cymbals and ring bells. They give each other “happy hugs.” They are having the time of their lives.

“He’s just so great at getting to the happy side of a child’s heart,” says the Joy of Children’s Howard, who co-owns the school with her sister, Alecia Spillman. “He just says ‘boo’ and it cracks them up. He’s like a big kid himself.” After more than 10 years with Mike on board, Howard says they’d be “lost” without him. “We can’t imagine our program without Music Mike.”

“We used to have neighborhood kids who would come over and say, ‘Can Music Mike come out and play?’” adds Christine, his wife of nine years. The couple, who recently moved from Antelope to Auburn, met in Los Angeles 18 years ago and have been together ever since. “He just has an amazing ability to read the kids and know what’s going to make them respond to him,” she says.

Life with a musician is “definitely interesting,” says Christine. “Some days I’ll be having breakfast on the patio and he’ll walk out and start playing some flamenco guitar.” Many people don’t realize the extent of Mike’s talent, she says. “He can play the full spectrum of styles, including classical. But the kids’ music isn’t that difficult, so people don’t know it.”

But that’s OK with Mike, who is clearly content just following his bliss.
“The kids give me an opportunity to do what I love to do, and my job is to show them how much fun music can be in their lives,” he says. “I never go home and complain about work.”