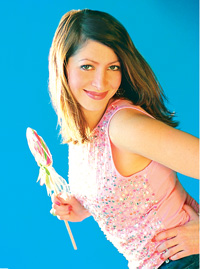 So, who says an artist can’t have a head for business? Certainly not Marisa Gutiérrez.

“I’ve always been an art-business-salesperson . . . art-business-marketing [person],” she announces at the start of our interview, which took place in her father’s midtown optometry office. As she talks animatedly and nearly nonstop, gazing at me with her huge green-brown eyes, my head begins to whirl: So many achievements, so little time!

At 29, Gutiérrez has compiled a résumé that most lifetime careerists would envy. Although she’s now running her own business—well, actually two businesses, but who’s counting?—she’s probably best-known for her successful tenure as executive director of La Raza Galeria Posada, where, among other things, she took the then-flailing cultural center/art gallery from an $81,000 deficit to a funding budget of $350,000.

“She was the youngest [read: 23] nonprofit executive director in Sacramento when she took over the very problematic Galeria, and she really built up the business before she left,” notes David Hosley, president and general manager of KVIE. Hosley should know: Gutiérrez has been on KVIE’s board of directors since 2002. “Marisa has been a very active board member at KVIE, and she has more ideas than I can possibly keep up with,” he says. “She has a great passion for the arts, and she is also a very creative and artistic person herself.”

Born Nov. 4, 1975 in bohemian Berkeley, Marisa Elena Gutiérrez has been drawing from the time she could hold a pencil in her hand. “Since I was 5 years old, my mom used to sit me down at a table and say, ‘Make me a card,’” she reminisces. “I started doing all these small drawings—fashion drawings, like a girl wearing a sweater, and I’d write down what color the sweater was, and what material I wanted it to be. I had stacks of these.”

Age 5 was significant in other ways, too: It also was the year that Nick and Bernadette Gutiérrez moved the family to Sacramento, settling into a Spanish-inspired home in Land Park. “Our house is like a piece of art,” gushes Gutiérrez. “My mother is a great artist. . . . I always call her the Mexican Martha Stewart.” Her admiration for her father, a Sacramento optometrist for 25 years, runs equally deep. “My dad grew up poor, but worked hard to become a successful professional,” she says. “Both of my parents are hardworking, good people, and my brother, sister and I (Gutiérrez is the oldest) are lucky to have a family like that.” Their support, Gutiérrez says, has been unwavering. “When it was time to go to college, and I decided I was going to do art, my parents never said ‘no.’ They were totally supportive.”

After receiving her bachelor’s degree in fine arts from Dominican University in 1998, Gutiérrez confronted the classic conundrum: How does one earn a living with an art degree? “An artist can go out and get an artist’s studio, and paint,” she says. “But when you get out of college, are you really going to be so advanced that you can live off your paintings? No, probably not . . . you’re probably going to be a waitress, or maybe you’re going to be a graphic artist, or go into marketing.” When a job search resulted in a sales and marketing position at the Spanish-language TV station Univision 19 KUVS-TV, Gutiérrez eagerly hopped onboard, but soon discovered it wasn’t for her. “I loved everyone I worked with,” she says, “but I just decided it wasn’t the career path for me.” So she quit after nine months and followed her heart to Europe in May of 1999, spending the summer visiting every major art museum in 14 countries. “It was amazing to see the works of all those artists I’d been studying,” she says. “I was just awestruck.”

Maybe she carried some magic dust from the old masters when she returned to Sacramento, because just five weeks later, Gutiérrez was once again awestruck—this time by a job offer for the executive director position at La Raza. “I thought there was no way I was going to get that job,” she says. “But when I went home after the interview, the offer was already on my answering machine.”

Gutiérrez’s list of achievements during her four years at La Raza (1999–2003) would eat up all the pages of this magazine, and it’s not all about the money (though the fact she turned the budget from red to black is, alone, a work of art). What most stands out about this dynamic whirling dervish is her single-minded commitment to promoting Latino art—the art of her people. At La Raza, Gutiérrez toiled tirelessly to bring to Sacramento the works of prominent Latinos, Chicanos and indigenous peoples, including Imágenes de Frida Kahlo (with photographs by Diego Rivera’s fresco student Lucienne Bloch) and Edward James Olmos’ Americanos, a Smithsonian traveling exhibition. At the same time, she championed the work of local artists, including youths—a path she continues to walk today as a frequent school speaker and volunteer mentor. “We were doing programming at La Raza that nobody else in Sacramento was doing, touching upon our Latino heritage,” she says. “I’m so proud of what I did when I was there, and I am so lucky to be Latina today—to have that cultural identity and to be recognized for it.” She points out that she is “Mexican on both sides,” with both parents first-generation Mexican-Americans.

Gutiérrez’s mission to promote Latino art continues with arteymas.com, an online source for greeting cards and fine art. (The website was under construction when this article went to print, but should be fully functional by early June.) “I felt there was a huge lack of imagery representing the Latino culture,” she explains, “and that’s why I started the business.” Her cards, which are hand-drawn and then computer-scanned, also can be found in a number of stores, including etc. and Joann’s Elegant Gifts in Sacramento and DeColores Trading Co. in Davis. (The majority of the cards are designed by Gutiérrez, but her goal is to expand the line to include the works of more artists.) Again, it’s the combination of marketing muscle and a heart for art that makes Gutiérrez run. “I have contacts all over the country because of the Galeria, and I have friends all over, and I’ve scouted out the stores,” she says. “Hopefully, by Sept. 1, my cards will be in all the major metropolitan cities across the country.” As usual, she dreams big. “I want it to be like a small, small version of Hallmark,” she says. “But more than that, I hope that when people pick up my cards, they will take in the colors and the happy feeling, because that’s what I’m trying to get across—how beautiful and vivid Latino people are.”

As all-consuming as it sounds, arteymas.com is actually Gutiérrez’s sideline business—the thing she does late at night, on evenings and weekends, when she’s not working her day gig. As principal of Marisa Gutiérrez & Associates, her event planning/fund-raising/communications company, Gutiérrez has clients that range from Fortune 500 companies to nonprofits to many of the state legislators. “Many of these groups were clients before I left the Galeria, because I was doing consulting work on the side,” she explains. “They would come to gallery events and see what we were doing, and that got the ball rolling.” In brief, Gutiérrez had developed a reputation as a miracle worker, and she didn’t have to chase the business much—it chased her. “More and more people started approaching me, and I figured I’d try it for six months maybe and see where it would go,” she says. “But it just kept on going from there, and I can’t tell you how much I love what I’m doing. I love working for myself—life is so much easier. And I’m making more money than I made at the gallery.”

As good as she is at turning profits—the words “business plan” roll off her tongue as regular as rain—those who know her well are quick to emphasize Gutiérrez’s kind, generous spirit. “She’s a real sweetheart when it comes to promoting local artists and helping them grow,” says John Castillo, a photographer whose work was featured in the Edward James Olmos exhibit. “She’s always trying to connect artists to other artists to help each other—she’s an artist’s friend.

“And,” he adds, lowering his voice conspiratorially, “here’s Sacramento’s best-kept secret—she’s single.”
Technically, he’s right: Gutiérrez doesn’t wear a wedding ring. But according to the lady herself, she’s taken: She’s been seeing her boyfriend, Mario, for two solid years—and she knows he’s “the one.”
“He helps me with everything—my business stuff, reviews my proposals, gives me advice, ideas, everything,” she says. “He’s like my silent partner. And my dad introduced me to him, so that must mean something, right?”