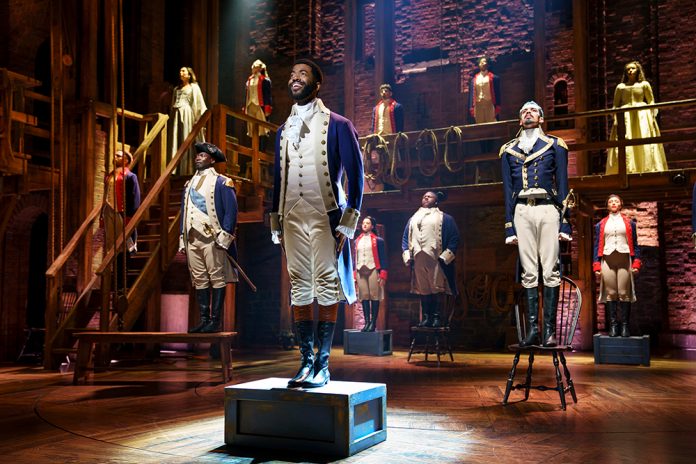 When Alexander Hamilton raps, “I’m not throwing away my shot,” the roar you hear from the Sacramento crowd will echo as a sigh of relief. “Hamilton,” the award-winning theatrical phenomenon, was long scheduled to appear in Sacramento. Not scheduled was the one-year-plus pause in live entertainment worldwide that proceeded its arrival here. Thanks to the vaccine shots, though, audiences are returning to venues, and even if we have to wear masks during performances (we may), that’s better than no performances at all.

With the pandemic receding in California, Broadway Sacramento can get on with its own annual high-wire act of presenting live musical theater. The region’s largest producing entity will christen its newly renovated home for Broadway touring shows, SAFE Credit Union Performing Arts Center, with one of the biggest show business phenomena of all time. In 2016, “Hamilton” received a record-setting 16 Tony nominations and won 11 Tony Awards. Lin-Manuel Miranda’s innovative retelling of early U.S. history as a hip-hop musical also won a Pulitzer Prize and, in Great Britain, an Olivier Award. The Sacramento run dates are Sept. 15 to Oct. 10, 2021. Formerly known as the Sacramento Community Theater, the building at 1301 L St. has undergone an extensive $120 million face-lift and seating reconfiguration since the last performance of the Broadway Sacramento presentation “Aladdin” on June 2, 2019. 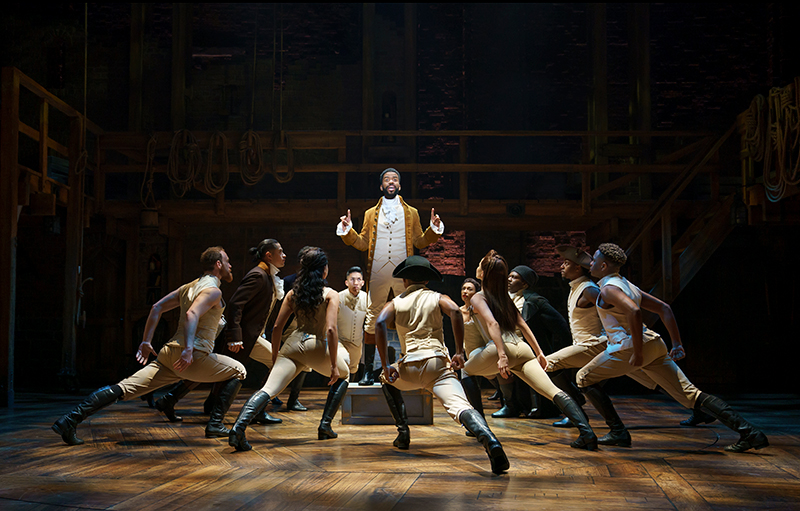 Padding around the deserted Broadway Sacramento offices on J Street across from Memorial Auditorium, president and CEO Richard Lewis arrives at his desk, which is covered in packets of contracts and memos. “In 2019, we issued 593 W-2 forms,” Lewis says. “In 2020, we issued 192. It’s all of those stagehands, musicians, actors, directors, choreographers, wardrobe attendants.” Lewis is listing all the people Broadway Sacramento didn’t employ last year for its presentation of national touring shows and its own original Music Circus productions during the summer. The next Music Circus season will be in the summer of 2022. There will be four holdover shows from the postponed 2020 season of Music Circus and two new offerings.

“Two of the titles became conflicted, so we had to bring in two new titles to put in there,” Lewis says. “Planning for a season, it starts really October-ish. Last October, we couldn’t plan for it [this year].” 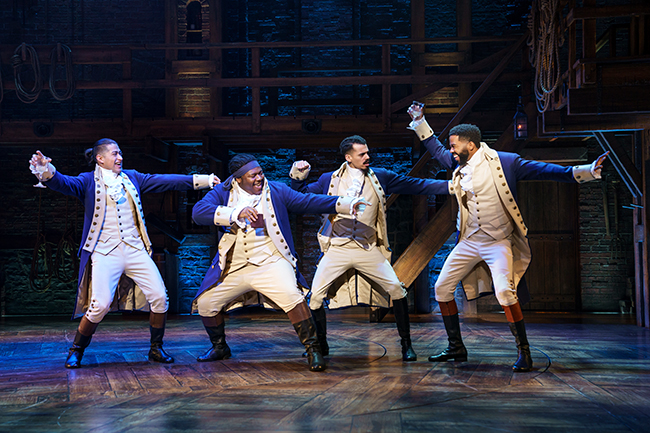 During the pandemic shutdown, scheduling was a maze of contingencies, with Lewis creating and discarding scenarios for various touring possibilities as they came up. Lewis finally patched together a couple of three-show touring seasons, which run through the spring of 2022.

Early in the reopening process, it was thought Sacramento would be the first “Hamilton” production back up and running nationwide. There are four “Hamilton” tour companies performing across the United States. However, when the California reopening timelines accelerated, the producers realized they could open back up sooner in San Francisco, where the all-important set was still standing in place, and play there for a month before moving to Sacramento. This tour will then move on to San Jose in October. 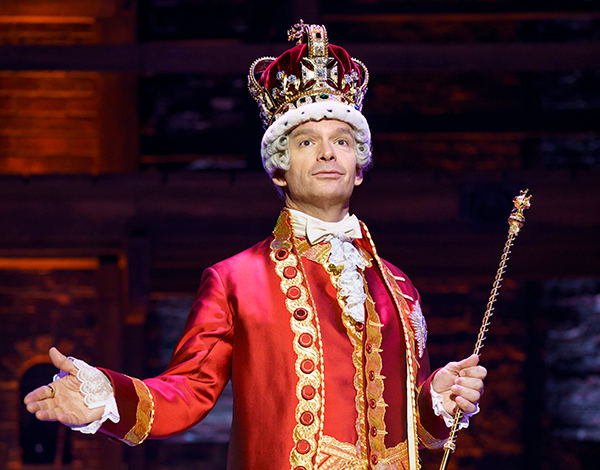 “Getting folks back to work is very, very important to my heart,” Lewis says.

“I’m happy that ‘Hamilton’ is 13 or 14 trucks, and I’m happy that that means they’re going to have to have a lot of stagehands and wardrobe folks doing the job. That’s great news.”

Pandemic uncertainty affected performers as much as anyone. For Bakersfield native Darnell Abraham, who’ll play George Washington in Sacramento, the waiting forced him into a new mindset.

“It’s crazy to think that when this pandemic first hit, we thought, ‘Hey, we’ll be out for a couple of weeks, a month at best, and then we’ll be back at it,’” Abraham says from Texas, where he is performing a couple of benefit concerts. Abraham had a prime job waiting; he just didn’t know when he’d be allowed to do it.

“The life of a performer, it’s full of uncertainties already, so that’s all part and parcel of what we do. But we’ve never experienced anything like this before,” Abraham says. He wondered if his life’s work, the training, the sacrifices, would all be for naught.

“I just remember thinking, asking myself this question, what does this mean? What does this mean for my wife and I? It took a little bit of time to adjust and to accept the reality that live entertainment is going to be on this indefinite pause until it’s safe to do it again,” Abraham says.

Abraham had only been in the role for six months when the pandemic hit; before that he had been an understudy. The company started in Puerto Rico in 2018 with creative mastermind Miranda playing the title character. When Abraham finally got his first chance to perform as Washington, Miranda was onstage with him as Hamilton. As debuts go, they aren’t much more auspicious than that. He occasionally reminds himself, “Well, that happened.”

When the theaters went dark last year, Abraham adapted by making himself available for digital opportunities that included singing for nonprofit fundraisers and teaching master classes.

“It was really a progression of grief to creativity. You start to figure out how can I thrive in this space for the time being. That was my personal journey,” Abraham says. 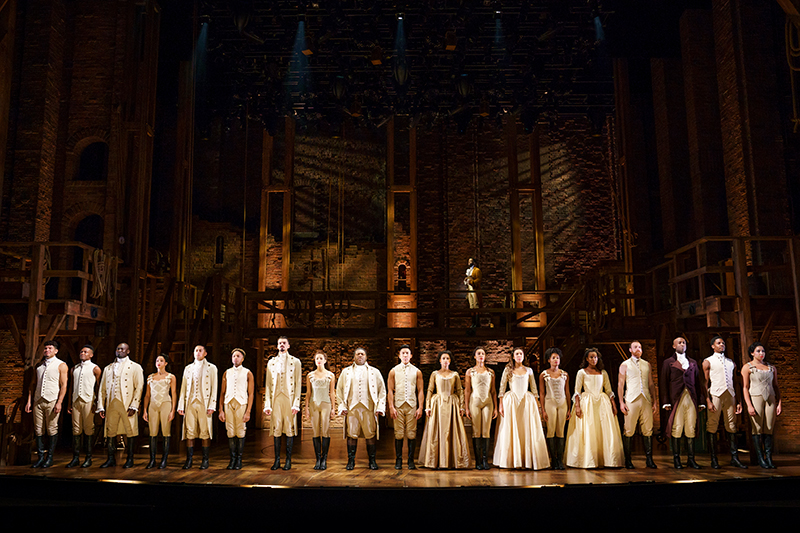 Rehearsals started for the experienced cast in early July. Even though the actors have the show in “our DNA at this point,” says Abraham, they are building the performance back up from its basic essential elements. For Abraham, that means going back to the character and performance work that got him onstage in the first place.

“For me, as an actor, as a person, I’m really interested in getting inside of who were these men. Who was George Washington?” Abraham says. “If I can get inside of that, then I can find these points of connection. I’m not trying to portray an exact version of George Washington. I can’t do that. I have to make sure that I’m telling the story that’s on the page.”

Much of the show’s appeal lies in the simple brilliant conception of having Black and Latinx actors portray iconic historical figures. Abraham says the play wouldn’t be the same without it.

“I think that’s the beauty, that we really get a visual of this patchwork quilt on stage. There’s a sense of like, “Wow, I can really relate to what’s happening on this stage,’” Abraham says.

“As a result, I do believe and I want to believe that there is some tone or version of reconciliation. I don’t know if that was intentional or that’s just a byproduct of this thing, but I think it’s a beautiful thing nonetheless.”