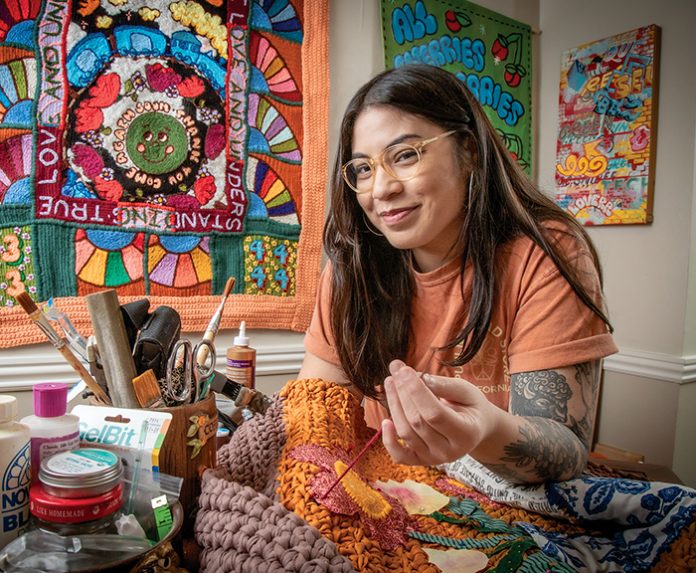 Working with fiber and textiles is what connects Esther Marie Hall to her cultural identities. It’s the thread she traces back to her childhood, growing up with a Southern grandmother steeped in traditional American crafts, while also learning about the artistry and customs of her Filipino roots.

As a multidisciplinary artist, Hall continues to explore her biracial identity through paint, textiles and mixed media, drawing correlations between the stitches that bind her grandmother’s quilts and the native Filipino-weaving techniques of maternal elders. 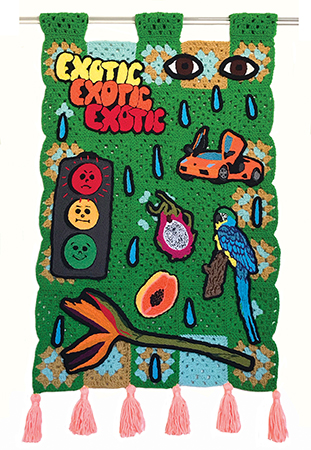 By her early 20s, Hall had pursued her calling and enrolled in the Fashion Institute of Design & Merchandising in San Francisco, where she focused on visual merchandising, followed by studying fine arts at Sacramento City College. Hall, now 30, describes her art back then as more abstract with finely detailed line work that often featured large, empty circles. 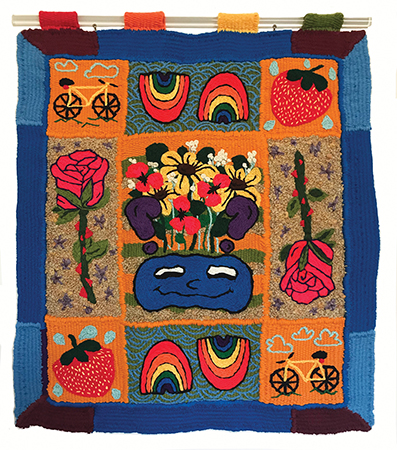 “A few years later, I was like, ‘Something is missing from these circles,’” Hall says. “So that’s when the happy faces started. Actually, they came from another childhood reference, Highlights magazine. It’s the kids’ magazine I always remember being at school or the dentist’s office, and there were always these stickers in them.”

Inspired by the colorful sticker sheets she collected as a kid, Hall began morphing those empty circles into playful faces adorned with cute button noses and thin, U-shaped smiles as recurring characters in most of her work.

Both Hall’s paintings and fiber art lean on bold colors and a playfully illustrative style that tickles the curiosity. Her art invites viewers to breathe in a rainbow-colored wonderland with beaming friendly faces and perky bouquets of flowers. And although her work is visually captivating and seemingly innocent, Hall uses her artistic talents as a means to shine light on issues she champions, such as environmental conservation, human rights and mental health.

“It’s a more approachable way to talk about things that are a little bit heavier, or for people who don’t know how to approach a conversation,” Hall says about the messages she weaves through her art. “I like to use this bright and playful idea [on the face of it], but then when you really look at my work, I typically use it to speak about heavier issues, like global warming. I’m trying to have that conversation with the viewer, or at least get them to think about it.” 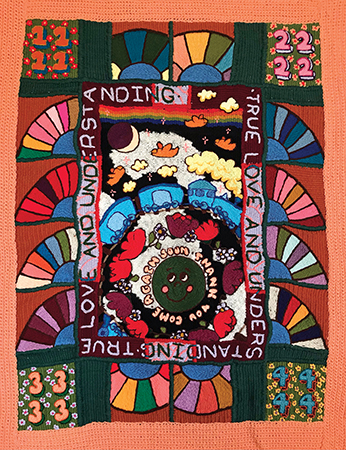 Hall’s art accompanied action when she exhibited work in support of Planned Parenthood for two consecutive years, starting in 2018 with its Capitol Day, when participants marched to the State Capitol building and spoke with state legislators about the importance of Title X funding.

Proud of her work for Planned Parenthood, Hall exhibited again in 2019 at the nonprofit’s The Art of Caring exhibit in San Francisco, which featured as guest speaker Kamala Harris. Later that summer, Hall accepted another opportunity as Facebook’s artist in residence, where she painted a picturesque, cartoonish mountain range inside the social media giant’s offices in Fremont. 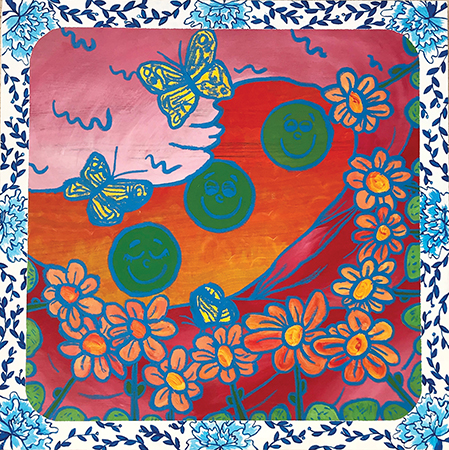 But like many artists, Hall also experienced her share of canceled exhibitions and financial loss due to the ongoing pandemic. So she adapted and started to focus on what was creatively possible from inside her modest apartment—everything from creating large murals to strengthening her fiber and textile skills.

Hall recently completed an 8-foot-tall mural for the Latino Center of Art and Culture’s COVID-19 Mural Project. In her signature bright style, Hall’s latest piece encourages social distancing with a simple phrase: “We can keep each other safe with a six foot space.” It’s a kind reminder of life’s new norms in a time when everyone is so distant. Yet the message is softened by peach-colored smiley faces wearing floral masks as they float down a curvy rainbow surrounded by lavender butterflies. 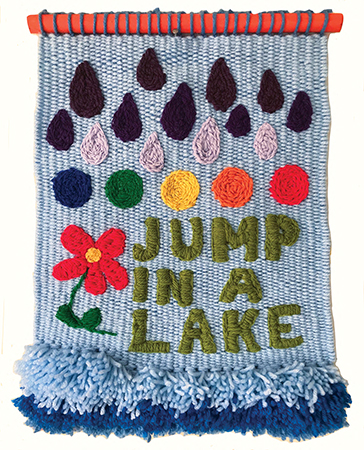 Although she enjoys painting, Hall says creating from home has allowed her to delve more deeply into fiber work, blending her cultural ties with the causes she values while also continuing to explore who she is.

“The fabric and textile work is just easier to do in an apartment. So it’s helped me explore different things about who I am,” Hall says. “Art, it brings something to your home. It brings something to the people and the spaces that we’re living in. Other than that, I will just be working on my fiber work and my posture,” she adds with a laugh. 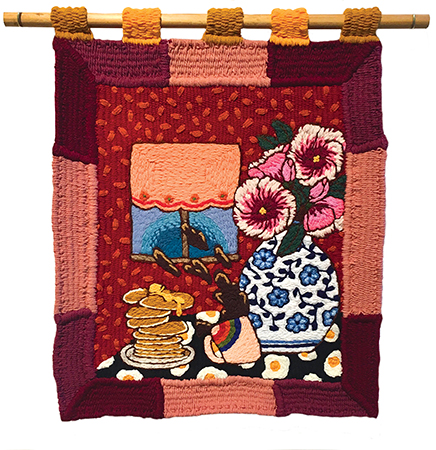 Art and other pieces by Esther Marie Hall can be found at her website.