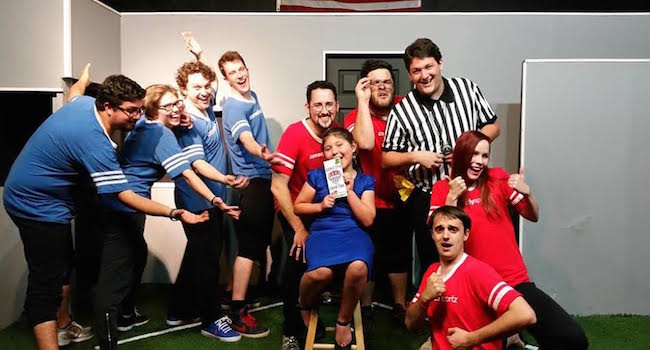 On any given weekend in a tucked away corner of Arden Way and Howe Avenue, two teams go head-to-head in a darkened room, duking it out in front of roaring spectators throwing out suggestions.

“Kim Kardashian!” someone will inevitably shout, despite her prominent placement on the list of retired suggestions. A fresh topic will break through the clamor, and the referee will declare it as the basis for the next scene that the competitive improv teams at ComedySportz Sacramento will perform.

ComedySportz, an institution in the comedy world since it’s founding in the 1980s, is—you guessed it—where comedy and sports meet. Two teams, (the red team and the blue team) play improv-based games, and the funniest team, as chosen by the audience, is declared the winner. A referee moderates the action, ensuring it stays family-friendly—and most importantly, funny—while taking suggestions from the audience.

It’s somewhat similar to the popular TV show “Whose Line Is It Anyway?” except ComedySportz did it first. It’s the original, and with alumni including actor Jason Sudeikis, “The Daily Show” correspondent Jessica Williams, “Community” creator Dan Harmon and many of the writers behind your favorite sitcoms, it’s also where some of the funniest people in the country hone their comedy chops.

With new players and different games every night, you’re guaranteed a fresh show. And if while you’re there you become inspired to do what they do, they also offer classes.

For more information, go to comedysportzsacramento.com.