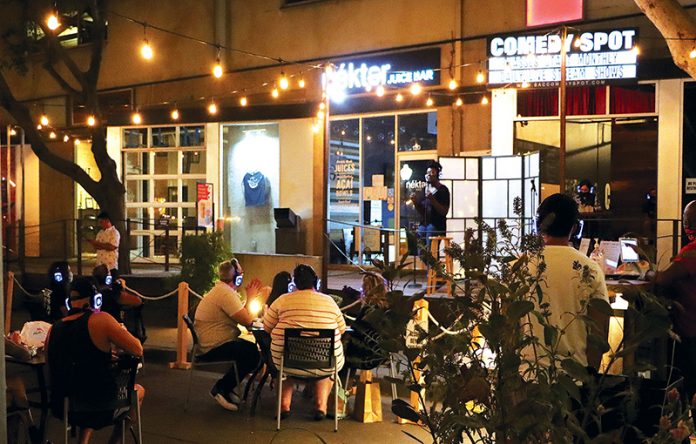 When Sacramento comedy clubs could no longer host audiences indoors during all of last year’s uncertainties, venue owners and the comedians who fill their rooms continued to do what they do best: make people laugh.

Much like with distance learning and working from home, comedy went virtual with live stand-up, sketch and improv shows hosted through online platforms such as Zoom and YouTube Live or popular streaming services like Twitch. Comedians quickly adapted and embraced new ways to reach audiences across different mediums, all to connect through laughter.

And while some venue owners and comedians predict virtual comedy shows will continue as a new way to access live comedy, many anticipate more opportunities for outdoor stand-up showcases and an increase of indoor events as entertainment restrictions continue to loosen across the country.

For longtime stand-up comedians like Ngaio Bealum, who’s made a career out of making people laugh for nearly 35 years, how comedy is delivered and how it’s received will continue to evolve with the times. But whatever the format, Bealum says he’s ready to show up and share jokes.

“One of the cool things about online comedy shows that I love is that if you want to do a show with your homies, you don’t have to fly everybody from L.A. or Seattle to Chicago or wherever,” Bealum says. “You just call them up and be like, ‘Brah, are you busy today?’”

“The thing about an online comedy show is you get the response, but it’s not as visceral. There’s also a different approach to the way I present jokes online because the camera’s right in your face and your timing is a little different,” Bealum says. “As opposed to just there’s a crowd, there’s a mic, there’s a barstool, here’s some jokes. The production for a lot of comedy has changed. I think that’s really the interesting thing.”

Although ticket sales for online shows have slowed down as more people become vaccinated and are willing to be more adventurous, STAB! Comedy Theater owner Jesse Jones believes streaming stand-up, sketch and improv shows will continue to be an integral part of his business model.

“I was fortunately already trying to stream all of our stuff every weekend anyway,” Jones says. “We got ahead of it a little bit because the last weekend before we had to shut down was the first time we had streamed everything we were doing. So it actually worked out pretty well.” 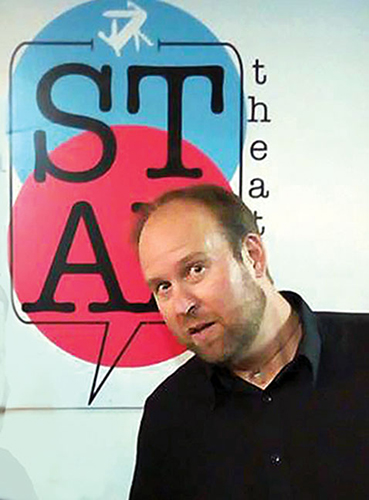 Jones endearingly describes STAB! Comedy Theater as “a little hole in the wall on Broadway” that offers budding comedians a lower-stress place to test out new material in its intimate, 40-person theater before moving on to larger clubs. Besides stand-up, a variety of sketch and improv shows are a large part of STAB!’s core entertainment lineup that Jones says transitioned well into virtual showcases.

Online audiences tune in to laugh at “Scene Kids,” an improv show run by Michelle Petro, where participating actors have their lines memorized from a movie, play or TV show script, while the improvisers in the scene are just winging it without knowing what’s next. There’s also “The Obscure Movie Trivia Show” with Buddy Dean, who invites movie nerds and other funny people to answer random cinema questions.

“I’ve always wanted to run a TV station, so I think STAB! Comedy Theater TV is going to continue to be a big part of how we exist going forward,” Jones says. “We’re going to start bringing back live shows, whether they’re out in the back or inside the theater again. But we’re also going to continue to run streaming-only shows for stuff that might not translate as well live.”

Working Through the Kinks

While it took some comedians a little longer to warm up to the idea of online comedy, many found that one of its perks was the ability to perform pretty much anywhere—as long as you had a smartphone and a parking lot with good Wi-Fi.

Still, the delayed laughter that echoes through a pair of small speakers just doesn’t hit the same. So Laughs Unlimited Comedy Club owner Jennifer Canfield decided to revamp live comedy with outdoor stand-up shows last summer inspired by silent discos, where audience members wear a set of headphones that are tuned into the performer’s microphone. This way, the sights and sounds from Old Sacramento haunts that surround Laughs Unlimited won’t be a distraction to the audience.

As a stand-up comedian for the past seven years, and often seen volunteering at Laughs Unlimited out of respect for the 41-year-old comedy lounge, Wendy M. Lewis was eager to adopt the silent-disco technique to host her monthly stand-up showcase, Capital City Comedy.

“Honestly, I hope it’s something we can keep doing even through the pandemic because it’s different,” Lewis says. “It’s fun to be a part of the outdoor nightlife of Old Sacramento. It took our art form and totally spun it around.”

Capital City Comedy at Laughs Unlimited gave Lewis the one thing she craved most: a live audience. With comedy clubs going either virtual or completely dark during the pandemic, Lewis says audiences are hungry for entertainment, and that raw energy is unmistakable, especially back on stage.

“To be able to see people responding now with more love than even before the pandemic really blows me away,” Lewis says. “Sometimes, I get a little overwhelmed and emotional because I missed hearing people laugh so much.”

Another comedy hub that adopted the silent-disco trend was Sacramento Comedy Spot in midtown. On Friday evenings, comedian Becky Lynn welcomes audiences back to live stand-up outside the Comedy Spot on 20th Street, which has been closed to vehicle traffic. Lynn says that hosting outdoor comedy shows has helped her get her comedic rhythm back as she learns how to feel comfortable in front of a crowd again.

“I’ve also noticed that the people who do venture out to comedy shows are very excited to be consuming live comedy. They’re definitely stoked to be out and to be doing something in the presence of other people,” Lynn says. “That energy is very palpable. It definitely feels like there’s this electricity in the crowd.”

Although outdoor stand-up shows are very different from the traditional dark comedy club where laughter bounces off the walls, Lynn says being able to adapt to your environment is the art of being a comic.

“We learn so quickly when we’re onstage performing. We are always conducting a set in a way, and trying to figure out what the next best move is,” Lynn says. “I think that’s just the nature of the performance style that we’ve chosen.”

Comics and those who love to laugh will show up on a moment’s notice just to get 10 minutes with a live audience. Comedy show organizer Ben Rice recently found that out when he booked a stand-up show at SacYard Community Tap House to take place within 24 hours.

The show featured headlining comedian Kyle Kinane, who’s appeared on Comedy Central’s “Drunk History” and the Netflix series “Love.” Kinane happened to be traveling to Sacramento from L.A. and was looking for a show to hop on. So Rice created one and lined it with Sacramento talents Kiry Shabazz, Johnny Taylor Jr., Emma Haney and Becky Lynn.

“We did it and the place packed out. We had to turn away dozens of people, unfortunately, because there is only so much space in a COVID outdoor show that is free of charge,” Rice says. “Kyle ended up really enjoying it, took no money and just made sure I paid all my comics. It was a lot of fun to put together at the last second.”

The SacYard show in April proved that comedy persists, that audiences need to laugh and that comics are happy to oblige.

“Laughing together, making people laugh and connecting with people in a moment of joy is just so fulfilling. That’s what comedy does for me,” Lynn says. “I love being able to evoke emotion in other people, and sometimes, it’s not always humorous. Sometimes, it’s very earnest feelings of sadness, of grief, of anger. But it always loops back to some type of laughter because I think that is what unites everybody.”