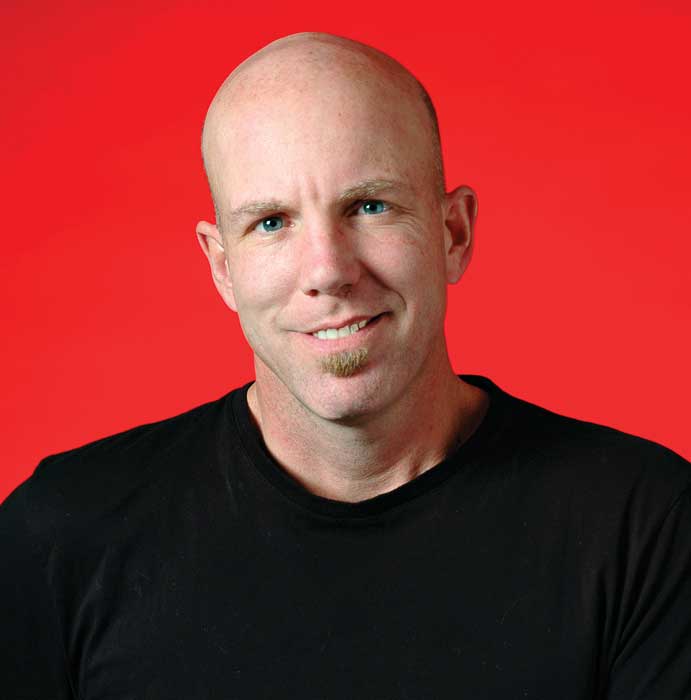 It’s been a decade since Randy Brennan and his wife, Laura Lee, lived in Spain, but their Mediterranean sabbatical still inspires the River Park artist—from the warmth of his palette to his love of the Fauvist movement led by Henri Matisse and André Derain.
Not to mention his passion for patinas. In fact, Brennan, 47, was so taken by the signs of age and time on certain paintings he saw there that he recreates the effect in his own artwork.
“I can spend six weeks on a painting, but the magic doesn’t happen until I nail it with a patina,” says Brennan, who uses acrylic paints for the finish.  “That’s when the sparks fly. The whole painting comes together.” Like the Fauvists (French for “wild beasts”) of the early 1900s, one of Brennan’s preferred styles of painting boasts clean lines, vibrant hues, and images of beachside restaurants, fish, wine and rustic wooden chairs.
Brennan works in several genres and media. He keeps his welding tools and table saws just yards from his easels and brushes. Many of his works are interactive: a door to open, a chain to pull. Such “conceptual” work is his favorite, he says.
Brennan also is drawn to midcentury Americana, depictions of which occur in some of his painted collages. One of his finer efforts sits in the driveway: a 1961 Shasta trailer he restored to near aqua-and-brushed-silver perfection.
Brennan’s works hang on the walls of area restaurants including The Kitchen and Cafe Vinoteca. While he has exhibited publicly in the past, he currently is focused on commission work. Visit randybrennan.com.

The above painting is titled: “Peace and Wisdom” by Randy Brennan