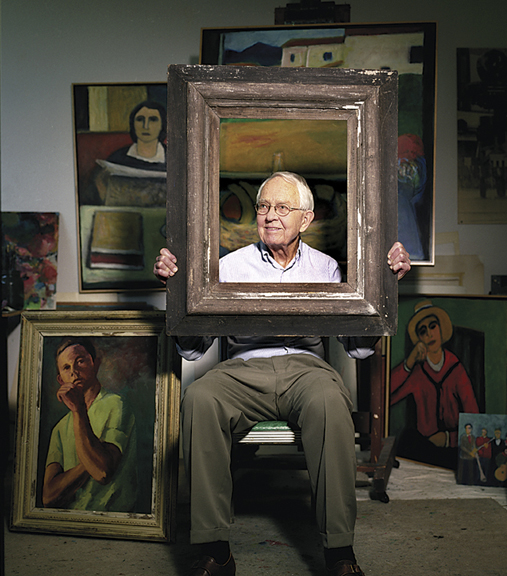 This 90-something-year-old painter and retired economist gracefully proves the power of both right- and left-brain thinking.

There’s no retirement for an artist; it’s your way of living, so there’s no end to it. —Henry Moore, sculptor

The marvel of Alan Post is not that he’s still painting at 91, but that he’s just 91. Not only has he effectively managed to cram two lifetimes into the space of one, but he just keeps on cramming—as if old age, if ignored long enough, will simply peel off like weathered, cracked paint, exposing a timeless, vibrant energy.

“Parallel” is the word most often used to describe Post’s lives. (No one who knows him is in the habit of referring to his life in the singular.) There is Alan Post the artist, who sold his first painting during the Franklin D. Roosevelt administration and whose expressionistic landscapes, human figures and still-life scenes have been turning collectors into addicts ever since.

“He is extremely popular and very collectible,” says Shirley Dubnick, director of the Solomon Dubnick Gallery in Sacramento, which represents Post and his wife, Helen, a sculptor. “He’s still painting like a youngster; in fact, he gets better as he gets older. Not only better, but much brighter and more colorful.”

The other persona is Alan Post the economist, wielder of significant power and influence during his 27 years as the state’s chief legislative analyst and a founding director of the Public Policy Institute of California. In 2000, the California Journal listed Post, along with Govs. Reagan, Johnson, Warren, and Brown Sr. and Jr., as one of the Golden State’s 30 most influential public figures of the 20th century. Well into his 70s and 80s, Post served on several boards and commissions, and he still belongs to the Senate Advisory Commission on Cost Control in State Government, “which,” he observes wryly, “we haven’t done very well at.”

Visiting Post at his Arden Oaks home, which he and Helen designed and had built in the late 1940s, I am struck by several things at once. First, the home itself: a treasure trove of art books and artwork (is that a Picasso ceramic I see mounted on the wall?) from all around the world, including several paintings by Post himself and sculptures by Helen, 90, whom Post describes as “a better artist than I am—so perceptive, imaginative and smart.” Clearly, these are people for whom art is as essential as air and more essential than everything else except their love for each other.

Helen is known to be her husband’s greatest admirer and most discerning critic, and vice versa.
“We respect each other’s opinions,” Post says.

He leans forward to regard a photo of his wife, circa 1970, posing next to “Hydro-Kinetic III,” her water-powered ferrous cement and bronze sculpture at the Teichert building, headquarters of Teichert Construction and Teichert Materials—one of California’s oldest and most established companies—in Sacramento.

Helen might say the same about him. Spare and elegant, with arresting Matisse-blue eyes, Post is stature, intelligence, grace and humility personified. He considers thoughtfully each question posed to him, mining his impeccable memory to answer in careful detail. As we discuss Post’s two worlds, I begin to believe that they aren’t parallel at all; that it’s really not a dichotomy of right-brain artist vs. left-brain numbers cruncher, but that somehow it’s all intertwined.

Consider his paintings, mostly oils and acrylics that borrow heavily from his travels abroad. He and Helen bought a house (with built-in studios, naturally) on the Mediterranean coast of Spain in 1965 and have traveled extensively throughout Europe, the Middle East, Mexico, South America and the Far East. In Europe, Post has spent countless hours with his sketchbook, capturing the visage of a French fireman here, a town in the Pyrenees there.

“I paint what I’m excited about,” Post says. He pauses and laughs, reminded of the time he happened to witness a candlelit religious procession while staying in Santa Fe, N.M. He was so overcome with the urge to paint the scene, he rushed back to his hotel room and set up a makeshift studio where the light was best: in the bathroom.

Post’s paintings are known for their colors, which have been likened to the warm reds, blues, greens and yellows of postimpressionists Paul Cezanne, Paul Gauguin and Vincent van Gogh.

“I like warm colors that are softly harmonious, not shrill,” he says. “People these days paint shrill colors for the shock of the new, but I’m not out for shock.”

Like the postimpressionist masters of the late 19th and early 20th centuries, Post pays painstaking attention to composition, organizing blocks of color so that they balance, making sure the vertical and horizontal lines flow harmoniously—a left-brain endeavor, it would seem, to achieve mathematical ratios that are innately pleasing to the eye. Post says that when he was studying art as a young man, his father, a prominent businessman and developer, observed that he was a “nature faker,” rearranging elements of a scene to suit his compositional needs.

Collectors of Post’s paintings, which range in price from about $2,500 to $9,000, seem suspiciously like connoisseurs of a well-known brand of potato chips: They can’t stop at just one.

John Skinner, leader of John Skinner’s Fabulous Band, and his wife, Susan, a singer, writer and photographer, have six of Post’s paintings—and counting.

“I’m besotted by his work. I even persuaded my sister, who lives in Auckland, New Zealand, to purchase one,” says Susan, who met Post for the first time while working on an article about him and has since become a social acquaintance. “It seemed to me that collecting his work was an essential part of knowing the man. Mr. Post is an incredibly sophisticated man who paints with the innocence of a child, and by that I mean his simple interpretations of everything he sees. It seems at times he’s painting straight from the tube [of paint]—and that’s an extremely confident painter, or an innocent painter.”

Luckily for aficionados, Post is a prolific artist, churning out as many as 50 paintings a year. But to paraphrase French writer Paul Valery, his work is never finished; it is merely abandoned. A dissatisfied Post has been known to reclaim a piece of art from a gallery show if he thinks it needs correcting.

“I’ll fuss with a painting for years if I don’t like it,” he says.

Aiding Post in his quest for improvement is his son, David, an only child, who retired from a successful career as an attorney and now paints full time from his home in Sacramento.

“When I began to paint, we developed this symbiotic relationship,” David says. “To this day, Dad will call me up and say, ‘I want you to come over here and give me some ideas.’”

From childhood, though, David remembers a very dif-ferent side of his father: the mover and shaker who had the ears and the respect of governors and lawmakers alike. In 1950, the senior Post became the second chief legislative analyst for the state, a nonpartisan office created in the 1940s to provide fiscal and policy advice to the California Legislature. But Post really was the one to establish the office’s reputation for credibility and excellence, says the current chief legislative analyst, Elizabeth Hill.

“He had an intellectual curiosity that I think probably came from his artistic background,” says Hill, who worked with Post for a year before he retired. “He considered things from all points of view. And he’s still as sharp as a tack.”

Post’s tenure spanned five governors: Earl Warren, Goodwin Knight, Edmund G. “Pat” Brown, Ronald Reagan and Edmund G. “Jerry” Brown. He has stories galore about all of the governors, one of them involving, coincidentally, a painting of Gov. Knight.

“When a governor leaves, they have a portrait painted of him, and some of the early portraits were very fine,” Post says. “But lately they’d been spending a great deal of money on a portrait that in my view didn’t have any real content as a painting. They might as well have taken a photograph and tinted it up a bit. So I went to the director of finance and said, ‘Look, you’re budgeting $8,000 for a portrait of the governor. Why don’t you get a good painting? Why don’t you get a committee of all the University of California art departments? Get them to advise you as to whom you could get appointed that would paint a first-class piece of art worthy of going into a museum, which is really what the Capitol is.’ And [the director of finance] said, ‘That’s great.’ So they got a committee to do that.

“Well, they decided on a visiting professor from Berkeley who was a good landscape painter but had never done much in the way of figure painting. His portrait wasn’t bad, but it wasn’t very good, either. Knight’s wife said, ‘If you put that up, I’m going to come on a dark night and take it down and you’ll never see it again.’ So it was a disaster. One night, the painting did disappear and was never seen again. So they appropriated another $8,000 and hired some other guy, and now it looks like all the rest of those jazzed-up portraits. I said, ‘I really failed as a legislative analyst. I cost the state $8,000 for nothing.’”

Throughout his years as a legislative analyst, Post was pursued by more than one governor to become the state’s director of finance, a position he always refused.

“Reagan wanted me desperately to become his director of finance, but I couldn’t think of it. I didn’t think he knew what the hell he was doing, and I liked what I did. I had the best job I could think of. I was influential, far more influential than if I were running political errands for a governor,” Post says.

“Dad was a guy who was not mired in the ideological political partisanship that in my view is wracking our country and our political system. He was a guy who truly cared about finding an answer that was best for the problems we were facing. He was truly a statesman, a public servant in the true sense of the word.”

David also believes that many times as an economist, his father would experience flashes of insight that could only come from the right brain, the repository of intuition and creativity.

Before taking the position as legislative analyst, Post worked at a bank, taught college economics and worked briefly as an economist with the U.S. State Department in Washington, D.C. He graduated with a master’s degree in economics from Princeton University following his undergraduate studies at Occidental College in Los Angeles, where he focused on economics and art. He took additional classes at Chouinard Art Institute in Los Angeles (now the California Institute of the Arts located in Valencia).

As a young man, Post never envisioned he’d be operating on all eight cylinders in his 90s. He and his wife figured they’d live happily together until they were 90 and then “just fade away.”

And now look at him: still breathing the smell of oil paint in his home studio, still creating great art despite cataract surgery, macular degeneration and a slightly shakier hand. The only thing fading away here may be the window shade.

Post’s son must be confident of a glorious genetic inheritance.

Says David, “Dad’s got an older brother who’s still going. He’s blind, basically, but he’s still painting from memory. He’s not going to stop painting because he’s blind. That’s my dad. They’re both tough. They have spirit. They teach us that nothing can stop us from feeling good about life.”