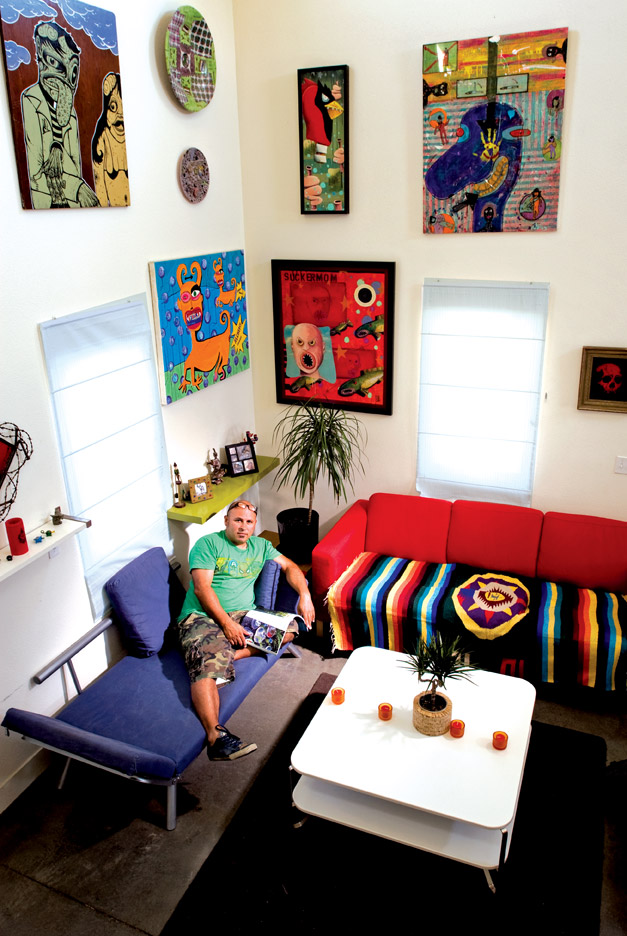 It often happens to low-income artists. Their creative influence helps a decaying neighborhood spring back to life, but the ensuing rise in rents forces them to move out. North Sacramento has been no different. Real estate is getting pricey in the self-styled Uptown Arts District, where Del Paso Boulevard is bustling with signs of economic revival.

But one determined group of 11 artists found a way to take root here. With public-private financial backing, they transformed themselves into one of the unlikeliest construction crews ever assembled, then spent 17 months building homes of their own.

Artists using power saws and nail guns, clinging to scaffolds and balancing high atop slanted roofs? Sounds like a recipe for disaster, but the successful result is Surreal Estates, a colorful community of 11 homes and art studios tucked away in the quiet Dixieanne neighborhood between Del Paso Boulevard and Arden Way. They moved into their new units in October 2006. We recently spoke with some of them about settling into life after The Build.

Kim Scott enjoys being known by the company she keeps, even if it puts her in a genre called Lowbrow Pop Surrealism with the likes of animators, cartoonists and tattoo artists. She thinks academic art is stinking of its own pomposity anyway.

No surprise, then, that she’s also in a collective called Art Dorks, composed of artists she met online during construction. The new affiliation has already landed her shows in Los Angeles, New York and Hamburg, Germany.

Predominantly, I do oil paintings. The topics are surreal (naturally!), with strange monster portraiture, she says. A fascination with the impermanent nature of experience, and the foibles and sublime nature of human beings inspires her work.

Scott has long advocated for affordable artist housing. In 1992, she helped write Sacramento’s Artist Live/Work Ordinance, making it legal for artists to live in warehouses that otherwise stand empty and unused. She co-founded Surreal Estates along with sculptor Jack Nielsen.

Pounding nails 40-plus hours per week left Robert Charland little time to pursue his work as a sculptor. Meanwhile, the housing lender grew impatient. During the whole time of the build, we were being told that if we [didn’t] get done in time, some of us weren’t going to get our houses, Charland says.

But midway through construction, the Sacramento Metropolitan Arts Commission chose Charland to design and create sculpture for Westlake Community Park in North Natomas.

It turned his career in a new direction. The six pieces he created, which were installed in August and depict clowns standing on their hands and twisting into the air, are his first sculptures in bronze. I used to say I’m a ceramics sculptor, but now I guess I’ve branched out.

Charland has several works on display at John Natsoulas Gallery in Davis. Working in his other favorite medium, tile, he created a water-scene mural for the 47th Avenue light rail station.

Videographer and spoken-word performer Rik Tillson is in a unique position to tell the story of Surreal Estates. I did a lot of videotaping. I have footage of us building, which is really history now, I realize.

Eventually, he wants to interview his fellow resident artists because it would be noticeable how everybody has changed, financially and, also, socially. Right now, he says, It’s hard to deal with the fact that we all really live here. It hasn’t been long enough to acclimate to everything.

In July, Tillson performed three shows under his stage name, DJ Rik Maverik, at Toyroom Gallery on K Street, that featured still-photo and looped-image displays adapted from his footage. The newest version of his word-and-image installation takes place in his home studio, Gallery X, as part of the Nov. 10 Second Saturday Art Walk.

Tillson also is the director of Short Center North, an arts-focused day program for adults with disabilities. Many Surreal Estates members teach classes there.

During construction, Valentino Fernandez was able to work on his art at Short Center North thanks to a Sacramento Metropolitan Arts Commission grant to do a collaborative project with his students there.

I did a series while we were building [called] â€˜The Seven Deadly Sins,’ using Popeye characters, he says. Fernandez and his professional partner, Stefani Skalisky, often depict whimsical cartoon characters in their tile murals and tile-on-formed-concrete sculptures.

Currently they’re at work on two public art projects to be placed in Orchard Park in South Natomas and Regency Community Park in North Natomas. Their tile work also adorns the columns at the Power Inn light rail station.

Other SMAC grants allow them to create works earmarked for donation to local nonprofit organizations, including Loaves & Fishes, WEAVE, Collings West Sacramento Teen Center and Roberts Family Development Center. We seek out nonprofits to kind of say â€˜thank you’ for the nice job they do in the community, Fernandez says.

A former downtown resident, Skinner loves living in North Sacramento now. It’s hella colorful and crazy, people are real and people are shady, and I get to hear loud people laughing and school buses with kids.

About his painting, he has this to say: It’s really hallucinogenic and political and fantastical and strange and narrative. The more I try to steer it, the more the thing that was going to surface naturally has a harder time surfacing. So I just kind of let it go as crazy as it’s gonna go. You go see it and let me know what you think.

It’s too late to see the retrospective of his work he displayed at his home studio for October’s Second Saturday called Mythology and the Illusion of Existence (my most ambitious, craziest art show I’ve ever done), but check out his murals at Javalounge, on 16th Street, which he painted during the Surreal Estates build.

We did. They’re hella crazy.

Rik Tillson, Kim Scott and other resident artists will exhibit their work at their home studios at Cantalier Street and Calvados Avenue on Second Saturday, Nov. 10. A complete roster of the 11 resident artists can be found at surrealestates.org.