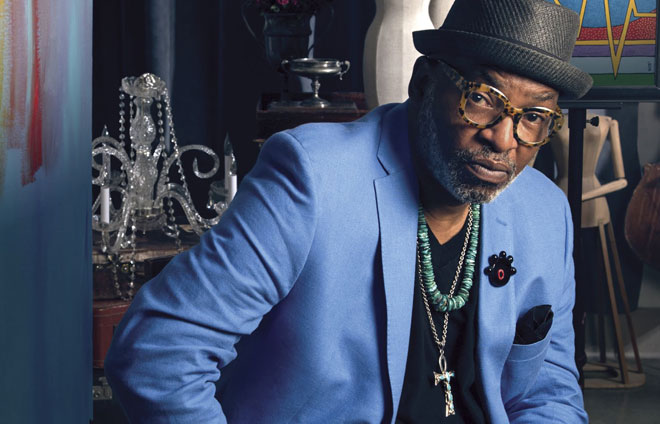 Sacramento artist Gerry Otis Simpson, better known by his moniker, GOS”, has been reinventing himself for nearly six decades.

Along the way, the 61-year-old New Jersey native has held many creative titles: painter, photographer, model, musician, merchandiser. He even spent a decade teaching visual merchandising and fashion promotion at American River College, but his greatest success is arguably as a painter and photographer.

On July 18, after renovating a former vegetarian restaurant by himself, Simpson opened GOS” Art Gallery Studio at 1825 Del Paso Blvd.—and did it in front of 300 attendees.

Simpson, whose work has been shown at the California Capitol, Crocker Art Museum and Muhammad Ali Center, is known for his bold, bright colors and signature circles.

“What goes around comes around,” Simpson says of the concept behind the circles. “I work with enamel pens, and one of my pens exploded on the canvas. There was no way to get rid of it, so I put a circle over it. I’ve been doing circles ever since.”

As for the cheery colors, which contrast heavily with his typically black-and-white photographs of urban environments, Simpson says, “The world around me can be so dull. When I come inside, I want it to be bright. If you look at my photographs, that’s my realism. In here, I bring my own sunshine, whatever the forecast may be.”

Simpson hopes to show other artists’ work in the gallery, which he calls a galletique—a portmanteau of “gallery” and “boutique”— within the next few months. “I think I would die if I couldn’t be creative, and I’m sure there are other people out there that feel the same way,” says Simpson. “I’m trying to give them someplace that they can show their stuff so they don’t die inside.”