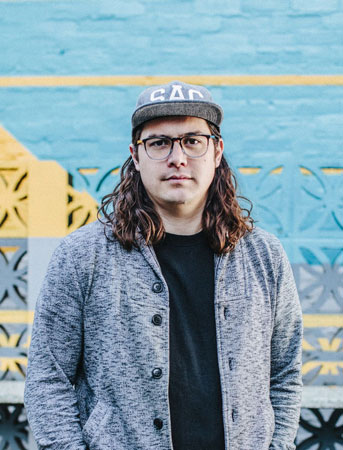 Muralist Jake Castro’s most notable creations don’t hang on walls—they envelop them. A mix of geometric abstraction and kinetic art, his colorful, energetic artwork makes eyes move and jaws drop, which is likely why he was invited to participate in two of Sacramento’s most raved-about public-art events of the year: Art Hotel and the Sacramento Mural Festival. Castro’s labyrinthine line work and laserlike blades of color can be seen on and/or in Crest Theatre, The Offices At Retro Lodge (11th and H streets), The Urban Hive and Warehouse Artist Lofts, among other locations. He’s also been commissioned to make his mark in various public spaces throughout Chicago, Spain and Thailand. What is the first piece of art you ever bought?

The first meaningful piece of art I purchased was from a buddy of mine in Chicago in 2012 who goes by the name Yams. I bumped into him on the way home from work, and he was hustling his pieces on a busy corner in Wicker Park. I’d just had a pretty good bartending shift that day and had some extra cash on me. He had a piece that caught my eye, so I scooped it up.

Since then, what’s been your approach to growing your art collection?

Being an artist myself, I understand the importance of supporting other artists. I wouldn’t call myself a collector of art but a supporter of artists. Actually, some of my favorite pieces I’ve collected over the years have come from trading with other fellow artists, so I’m always open for a swap. “ I received this as a gift from my girlfriend, Keavagh, a few years back. We went to one of his shows in San Francisco and got to meet him. He’s been a huge inspiration to me ever since college, and she knew how much having one of his pieces meant to me.”

Which local artist excites you the most right now?

Trent Dean is a supertalented furniture designer based here in Sacramento who has been experimenting in the realms of public art. We’re both members of Hacker Lab, which we use as our studio, so we’re able to bounce ideas off one another and watch as new projects come together.

Does the art you own inspire you?

Yes. It’s always great to have art that inspires you in your creative space, so I have a few pieces hanging in my studio. The art I choose needs to get me excited to read into it a bit more—and I want for someone who sees it in my home or studio to have that same feeling. It’s Slay Time at the City