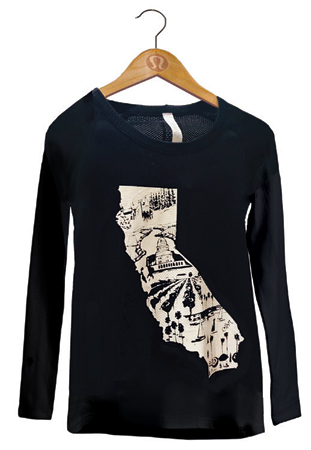 National retailer Lululemon has teamed up with Sacramento artist Tim Collom for a series of limited-edition tops printed with Collom’s eye-catching artwork. The most recent design features a map of the state filled with iconic California images: a Sierra ski lift, the American River, the San Francisco skyline. Initially, the men’s and women’s shirts were sold only at Lululemon’s Arden Fair store. But after customers snapped up 100 state-map shirts within 15 minutes, the retailer began carrying them at its San Jose and Walnut Creek stores as well. “We’re so lucky to have Tim,” says Katie Little, a regional manager for Lululemon. “He’s an extraordinary artist, and he captures the vibes of living and recreating in Northern California so well.”