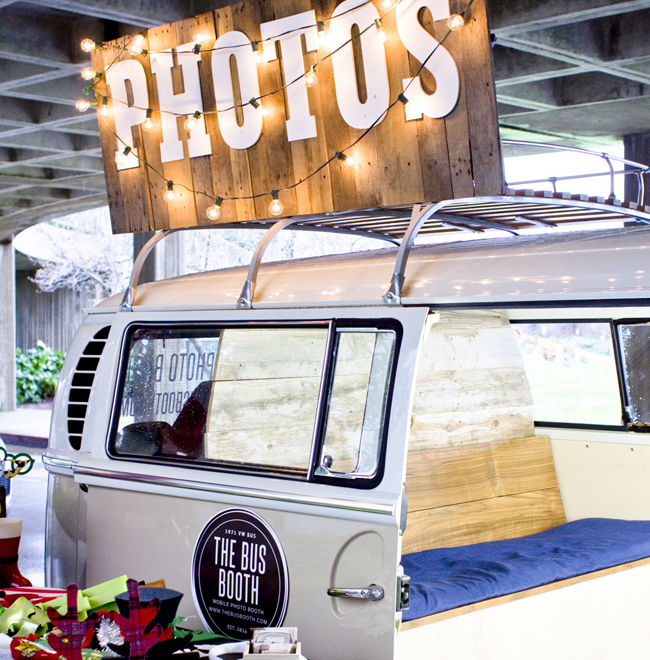 A year ago, you wouldn’t recognize the Volkswagen Deluxe Microbus now known as The Bus Booth (thebusbooth.com). In December 2013, Redding resident Josh Cremeens found the dinged-up, rusted bus in the classifieds section of a Volkswagen forum. Last spring, he and wife Amy restored and transformed it into a mobile photo booth for weddings and other events. It’s seen thousands of miles and smiles since.

NUMBER OF MONTHS IT TOOK TO RESTORE AND UPGRADE THE BUS

“She had the normal dents and dings that any 43-year-old vehicle would have,” says Cremeens. So he and Amy had the bus stripped down, put through three stages of primer and sanding until it “was as smooth as glass” and freshly painted the original Kansas Beige and Pastel White colors. Then they added multiple layers of sound-deadening material and insulation and had all the interior panels and headliner custom-made out of Baltic birch—the same wood used in the original VW campers. They also put in a hardwood floor and a custom black-walnut bench.

AVERAGE NUMBER OF PROPS AVAILABLE FOR EACH EVENT

“We have a Viking helmet and Batman mask that always seem to be hits,” says Cremeens. They also stock boas, mustaches, lips and customizable chalkboards.

MILES PUT ON THE BUS BOOTH SINCE ITS DEBUT

“It’s really hard to tell how many miles she’s traveled in her lifetime,” admits Cremeens. “The odometer says roughly 83,000, but it has surely turned over once or twice. I’m guessing at least 183,000 total miles, maybe more. Regardless, this bus has seen a lot. Can you imagine the stories that she could tell?”

YEAR IT WAS OFFICIALLY MANUFACTURED

Cremeens decoded the manufacture plate and discovered that the bus (which he named Maggie) rolled off the assembly line on Jan. 18, 1971, as a seven-seater Volkswagen Type 2. “She was then exported from Germany to Boston and has traveled the country for the last 44 years,” he says. “We found her in Oakland.” MILES FROM REDDING IT WILL TRAVEL TO EVENTS FOR FREE

The Bus Booth is based in Redding and focuses mainly on Redding, Sacramento and the surrounding areas—but it’s traveled as far as San Francisco for events. “We love to travel and are always willing to do it,” says Cremeens. “However, Maggie occasionally requires maintenance, so we try to not be too hard on her.”

SECONDS IT TAKES TO PRINT THE PHOTO STRIPS

The Bus Booth’s technology is lightning fast, thanks to its professional-level DSLR camera, touch screen and top-of-the-line dye-sub printer. Its LED lighting is also a huge hit. “We’ve heard many ladies comment about how flattering the lighting is,” says Cremeens.

IDEAL NUMBER OF PEOPLE WHO CAN COMFORTABLY FIT INSIDE AT ONCE

RECORD NUMBER OF PEOPLE WHO HAVE FIT INSIDE AT ONCE

NUMBER OF DOLLARS TO RENT THE BUS BOOTH FOR A DAY