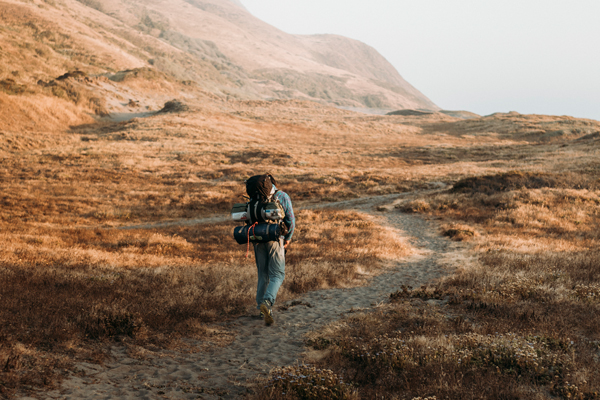 When photographer Spencer Backman set out to walk the coast of California from the Oregon to Mexico border in July 2017, he had three objectives: Gain a sense of perspective made possible only by living differently than what one is accustomed to, emerge with sufficient photographs and stories to publish a book about the journey, and “don’t die.”

“The pull on my heart to attempt that which is difficult, dangerous and uncommon has been in me for as long as I can remember,” says Backman. “I need(ed) to heed it or kill it.”

So in early 2017, the Sacramento native left his job as the visual media director for a local media marketing company, focused on his freelance photography and began making preparations for the 1,200-mile journey.

“I want to travel as a way to slow down my life, not to speed up it up,” Backman explained at the outset of the trip. “A way to simplify, not complicate. The simplest way to accomplish this is to walk. So I am following the call and abandoning the comfortable for the compelling.”

Backman began at the California-Oregon border with a 60-pound pack loaded with his photography equipment, basic camping gear and rations to survive the first leg of his walk. Two of his sisters dropped him off and he set out alone, planning to cover 10 to 12 miles per day for approximately four months.

“Saying goodbye (to my sisters) was the hardest goodbye I’ve ever done,” he says of that first day of the journey. “It was not only saying goodbye to them, but also my last person-to-person contact with anyone who knew me or cared before stepping into a very unknown journey. I didn’t know where I was going to sleep even that night.” Although he planned to travel alone for nearly all of the walk, he was surprised to have several family members and friends express interest in joining him. “I actually had people accompany me for far more of the journey than I’d expected,” he says. “I come from a family of nine, and each of them joined for a few days of the walk. My fiancée joined me for a section as well. And one of my best friends unexpectedly returned to Sacramento after a year of traveling and, after giving normal life a try, decided he wasn’t ready for it yet, and joined me for approximately a third of the journey. So in the end, I walked about a third by myself, a third with various members of my family and a third with my friend.”

Backman walked entirely along the coast (not the Pacific Crest Trail, as many people assumed upon learning of his journey), trekking across miles of sandy beaches, ragged cliffs and highway shoulders, all the while facing off with mudslides, animals, endless gray fog and the ever-present question about what that night’s campsite would involve. “Depriving myself of the standard conveniences and comforts of the Western world let me experience life without being insulated from my surroundings, and that taught me some invaluable lessons about what is truly important,” he says.

As Backman captured hundreds of raw images each day, the impact of his journey began to shape his approach to his photography as well. “I realized so much more clearly what I value, which greatly influences the way I shoot. My goal in every photograph I create is to communicate a truth, often a truth too complex to be properly expressed in words. Without that, a photograph hardly matters. Especially in our consume-and-discard culture, just a pretty view is now passed over in half a second. I aim to capture images that exude thoughtfulness and make people stop for just a moment and feel something.” Nearly a year after he began his walk, he’s alive and well and back home in Sacramento with a successful Kickstarter campaign for his forthcoming book and a hard-earned new perspective about what matters and what’s just another pretty view. It’s safe to say that Spencer Backman found what he was looking for along the California coast—and perhaps what he didn’t know he was looking for, too.