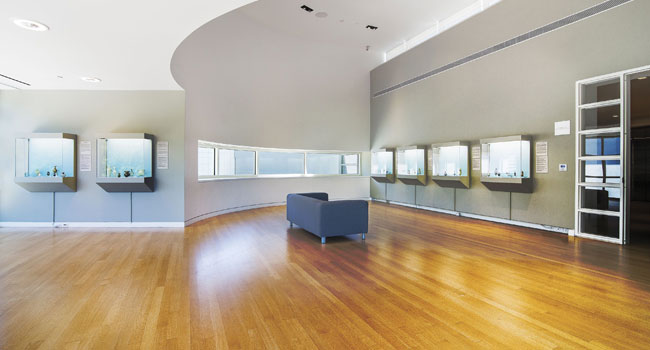 Marcy Friedman loves art. This fact is readily apparent from the moment you drive up to her Carmichael property. Her front gate itself is a work of wrought-iron art, and the eye candy continues as you move from the driveway to the courtyard through the front door flanked by imposing statuary and into the riverfront home itself, which is so full of fascinating things that it’s hard to know where to look first. If you then move into the kitchen, you might not notice the simple, clear cabinet above the credenza full of delicate glass vessels, poised on the shelves like everyday stemware you might offer a dinner guest. But look closer and you’ll see that these vessels are unlike any you’ve ever seen—unless you happen to shop for your glassware at archaeological sites.

Friedman’s eclectic art collection—amassed over decades of travel and gallery-going with her late husband, attorney, developer and philanthropist Mort Friedman—contains gems like these 50 pieces of ancient glass, which, at the time of this interview, are about to embark for the Crocker Art Museum for an exhibition titled The Luster of Ages: Ancient Glass From the Marcy Friedman Collection. (The exhibition runs through Oct. 16 as part of the museum’s Summer of Glass.) The pieces date from the sixth century B.C. to the eighth century—a historic collection, to be sure. But the unassuming art aficionado insists that the story of how they made their way into the Friedman household is “not very romantic.”

Over the past 25 years, Friedman would travel to Israel with her husband for the annual board meeting of the American Israel Public Affairs Committee, on which Mort served. When not meeting with prime ministers and state officials (Friedman says “wives were always very welcome” at these meetings, as “it’s not a sexist culture”), Friedman would check out the local shops in Jerusalem. But it was through a family tie that the ancient glasswork entered her life.

“My husband’s cousin, Miriam Tadmor, was the curator of antiquities at the Israel Museum,” Friedman says. “Her husband, Haim, was a renowned professor of ancient Assyria and cuneiform writing, and I was interested in collecting ancient Israeli coins. I asked Miriam, ‘Who do you trust?’ and she connected me with a Yemenite Jew who had a shop across from the King David Hotel.”

This connection with Zadok, the shop owner, proved particularly fruitful. There, Friedman fell in love with and purchased a few ancient glass specimens he happened to have, and she soon became one of the first collectors he’d call when a new piece came in. (She happened to be standing in the shop when a group of young boys brought in a few amphorae they’d found.) She also made the acquaintance of a second dealer, Gideon Sasson, who brought even more expertise to the endeavor. Through him, Friedman secured the bulk of what she considers her “best pieces,” and he recently helped get her entire collection appraised for its move to the Crocker. (He’s one of only six dealers in the world with the kind of background to do so, Friedman reports.) A Roman amphora from the fourth or fifth century, from Marcy Friedman’s collection

But even with the aid of knowledgeable dealers, the exact origins of these Greek, Roman and Phoenician-influenced vessels remain largely unknown. Friedman explains that many of them contained precious oils and perfumes to accompany deceased people into the afterlife, but where they were found—whether in accidentally discovered tombs or churned up during the plowing process on a farm—often remains a mystery even to the dealers themselves. This means that William Breazeale, the curator of the exhibition at the Crocker, had his work cut out for him.

“We’ve worked with international experts on ancient glass to know more about the collection and the material in general, supplementing our own research,” Breazeale explains. “At the same time, we focused on issues such as creating special cases and lighting, as well as other challenges of displaying this delicate, beautiful material in a way that is appealing and informative.”

Their delicacy and beauty drew Friedman to the pieces in the first place. She started with simple styles. But as her collection grew, so did her interest in finding more unusual specimens. Her collection reflects this evolution of interest: Some pieces are very basic in form and pale in color, still covered with the grit of the centuries. Some boast brighter blues and a fine pattern on their surface that’s almost undetectable to the naked eye. Still more take on an iridescence when shifted in the light, which makes them look like they contain a galaxy or were made from melted mermaid tails.

“Glass has permanence—it’s survived buried for some 2,400 years, after all,” says Friedman. “But it’s also so fragile that it’s always at risk. The beauty is undeniable.”

The collection’s visual appeal coupled with its historic significance piqued the Crocker’s interest.

“It’s fascinating to see not only familiar forms such as the early core-formed alabastra but also forms that are new to me and that demonstrate such great skill on the part of ancient glassmakers—for example, a bottle with delicate, spider-weblike filaments connecting various points on the interior,” Breazeale says. “It is incredible to think that thousands of years ago, people had already figured the technique out. And it’s very different from blown glass, which is what we often think of when we think of handmade glass. It’s wonderful for the Crocker to be able to foster knowledge of ancient glass and to share its beauty with the public. We’re grateful to Marcy for allowing us to do so.” A Roman double balsamarium made between the fourth and sixth centuries, from Marcy Friedman’s collection

Friedman is nothing if not generous in her work with fellow collectors and creatives. She and her late husband have supported the arts for decades through contributions, purchases and service on various arts boards. For example, they launched the donation drive for the Crocker’s 2010 expansion with a $10 million gift. (Friedman was the co-chair of the multimillion-dollar fundraising campaign.) They also helped the museum secure the Dale Chihuly chandelier that now hangs in its Teel Family Pavilion. Friedman also donated $1 million to commission local artwork for the new Golden 1 Center. She’s served as a board member for the California Museum, the Sacramento Metropolitan Arts Commission, the United Way, the Leland Stanford Mansion Foundation, the California Alliance and the Jewish Federation of the Sacramento Region. She also served as director of the Sacramento Region Community Foundation for 12 years and served two terms on the California Arts Council.

The Friedman residence is a testament to the philanthropic pair’s support of the global arts community in their private life as well. Their home is an indoor-outdoor museum with countless tribal pieces, large- and small-scale sculpture and a plentitude of paintings with special emphasis on artists from Northern California. (Friedman finds “joy in knowing the artist.”)

The Friedmans’ legacy of generosity isn’t just monetary. The couple’s connection to other art collectors across the country has proven very helpful for the Crocker, not just in securing the funds to purchase the Chihuly chandelier, but also in sourcing artwork for exhibitions. As the Crocker’s Summer of Glass started to take shape with the installation of the Chihuly and other glass-focused exhibitions, the more Friedman’s array of ancient pieces became a fitting complement.

“When the other, more contemporary shows comprising the Summer of Glass came about, it seemed a good moment to explore the very origins of glass as well,” Breazeale explains. Thus, The Luster of Ages was added to the lineup.

Though having artwork from her extensive collection exhibited isn’t necessarily new to Friedman, it gives her a special kind of enjoyment to know that the wider population will be able to revel in the beauty of the pieces that the Friedman family (and those lucky enough to stand in their kitchen) have enjoyed for so long. Perhaps part of her glee is informed by the feeling she gets seeing her own handiwork on display: Friedman, a masterful painter in her own right, recently took up painting again after a break of 42 years.

Friedman was a pre-med student when she met Mort at Stanford University, where Mort earned both a bachelor’s degree in business and a law degree. The two married in 1955 and had three sons. While she loved raising them (“and keeping them out of trouble,” she adds), she realized that she needed “something for me.” That something was painting.

Having taken a life drawing class at Stanford, Friedman knew that she had an eye and a heart for art. She started taking painting classes through Sacramento City College and with artist Benny Barrios, who would hire itinerant residents of what is now Cesar Chavez Plaza to pose as models. Friedman’s arts education continued until about 1973 when her family needed her undivided attention again. She didn’t pick up a paintbrush until more than four decades later when Mort was fighting a three-year battle with progressive supranuclear palsy, which eventually claimed his life in December 2012. Recognizing the need to “refashion” her life in the face of impending grief, Friedman returned to painting by convincing artist Pat Mahony to host live model sessions at the latter’s studio. Now, anywhere from three to five people—including celebrated local painters Jian Wang, Fred Dalkey and Boyd Gavin—meet regularly to make art together. Friedman has shown her work at the (now defunct) Alex Bult Gallery, and has a new show in the works for the fall.

Maybe it’s her artist’s eye that’s behind the awe-inspiring array of artwork that graces her home and occasionally takes up residence in a Crocker exhibition hall. Maybe it’s her love of supporting her community and fellow creators that makes the Friedman collection such a diverse display of the ability of the artistic mind. Or maybe she loves to be surrounded by beautiful objects that remind her of the ephemeral nature of life and the beauty and strength within—the glass that’s been buried for thousands of years and emerges ever more beautiful for its resilience. Whatever the reason, Marcy Friedman clearly really, really loves art—and Sacramento is the better for it.