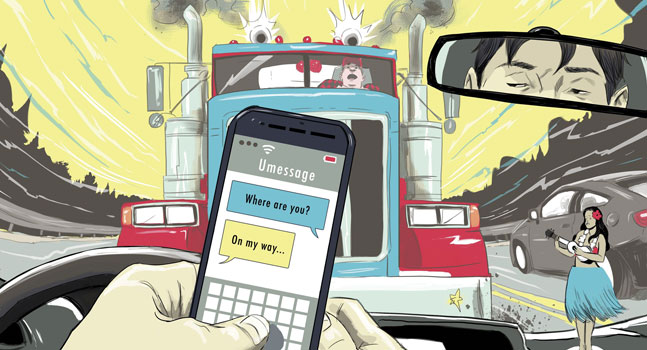 Take a peek in your neighbors’ cars when stuck in traffic on I-80 and you’ll see more than your share of drivers looking down into their laps and not at the road. Pause at any stoplight in town and watch folks behind the wheel quickly checking their email. Heck, on a recent trip down Highway 50, I counted more than 10 drivers eagerly tapping away at their phones while doing at least 70 mph.

The first phone call made from a vehicle took place in 1946 in St. Louis, Mo. Engineers at Bell Laboratories had worked for nearly a decade on the technology, and by 1948, wireless telephone service was available in almost 100 cities. However, with only about 5,000 users making about 30,000 weekly calls, the use of mobile phones was far from common.

Now, almost 70 years later, there are 254 million vehicles on the road in the United States—13 million on the road in California alone—and nearly every one of those vehicles contains a mobile phone.

We know many of the benefits of mobile phone technology: higher productivity, emergency communications, speedy information access and increased connectivity. Nevertheless, the danger of being “connected” at all times is becoming much clearer.

According to the official federal website for distracted-driving information, distraction.gov, approximately 424,000 people were injured on U.S. roadways in 2013 due to distracted driving. In the same year, 3,154 people were killed in vehicle crashes involving distracted drivers. If we include noninjury accidents, the number of accidents caused by distracted driving rises to 1.6 million in the past year.

Distracted driving covers a range of activities behind the wheel including using a phone, eating, talking to passengers, grooming, reading maps, using a navigation system, watching a video or adjusting the radio. However, many researchers see texting and driving as the most prevalent and dangerous distracted-driving activity.

“We as humans are just not that good at multitasking,” says Maya Leggett, M.D., a trauma surgeon at Kaiser Permanente South Sacramento. “Texting takes our eyes away from the road, involves our hands and brain, and completely distracts from the tons of small decisions we have to make every second while driving a car.”

Her statement is backed up by multiple studies. According to a recent finding by the Transport Research Laboratory, texting while driving slowed reaction speeds by 35 percent compared to undistracted driving. Another study by the National Safety Council found that answering a text takes away your attention from the road for about five seconds. Traveling at 55 mph, that’s enough time to travel the length of a football field.

In other studies collected by the Centers for Disease Control, 31 percent of drivers said they had texted while driving within the 30 days before they were surveyed.

“We see it in surveys again and again,” says Leggett. “People admit to texting and driving, and in the same breath confess that they know it’s wrong.”

Kimberley Rose, Ph.D., a neuropsychologist with Sutter Health, explains some of this disconnect. “People like to stay connected to other people and be ‘in the know,’” says Rose. “So it is very reinforcing to check your phone for messages and send out messages, because it is immediately emotionally rewarding. Furthermore, even though texting and driving is dangerous, you do not always end up in an accident when you do it. Because of this, if you text and drive, you end up lulled into a false sense of safety.”

You may have seen a disturbing head-line recently that claimed texting and driving as the leading cause of teen deaths, supplanting drunk driving. This claim isn’t yet backed up by any hard data, but it does suggest how dangerous texting and driving is, especially for teen drivers.

Even though using a phone in any manner while behind the wheel is an automatic violation for the under-18 driver, 77 percent of young adults are very or somewhat confident that they can safely text while driving, according to a 2011 study. Also, in a recent AAA study, it was found that dis-tracted driving attributed to mobile phone use causes nearly 60 percent of teen accidents.

Officer Chad Hertzell, an 18-year veteran of the California Highway Patrol and the current public affairs officer for the CHP Valley Division, told me that while current restrictions on teen driving can help with the frequency of accidents, it’s not enough to keep them from happening.

We need cooperation between teens and parents to get the message home,” he says. “It’s not enough to tell teens not to text; parents need to know not to text their children when they think they could be driving.”

Hertzell recommends that teen drivers text their parents before they start driving, letting them know they are going somewhere or are on their way home. Parents should not respond to these texts and should instead wait until their teen arrives home or at their destination. Simple considerations like these can help tremendously.

California prohibits hand-held use of any phone for any reason, other than an emergency, by the driver of a vehicle, whether the vehicle is moving or stopped at a stop sign or stoplight. In fact, there are laws on the books in every state of the union regarding cell phone use while driving. Some states, like Texas, still allow most hand-held phone use while driving, but the majority of states prohibit use of phones in most situations while behind the wheel.

Of those states that fine drivers specifically for texting while driving, or TWD, California has the lowest fine, just $20.

“That’s a bit misleading,” says Hertzell, “because once you add on the county court costs to that $20, the total cost of the ticket is closer to $150.”

However, compare that to the nearly $13,000 cost of getting a DUI, which includes a jail stay, license suspension and appearance in court. The two aren’t even in the same ballpark.

Similarly, at the scene of an accident, Highway Patrol officers can conduct field sobriety tests or Breathalyzer tests if they suspect impaired driving. If they suspect that phone use led to the accident, however, they can’t have access to a driver’s phone records without a warrant.

Basically, drunk driving is easier to prove for law enforcement, and much more detrimental to the life of the offender. At the same time, violating distracted-driving statutes carries with it a fairly minimal fine, and the law can be enforced only by the officer who witnesses the infraction.

We were able to reduce the number of fatalities due to drunk driving in America by attaching a stigma to driving while intoxicated,” says Kaiser’s Leggett. “That same stigma currently doesn’t apply to texting and driving.

Leggett is passionate about the subject. She feels that people who text and drive feel like they’re being responsible, like they’re staying in touch with friends or family, or being productive professionally.

But attitudes change,” she says, “and we need to be working harder to get the message out. People have died, and people will die because of this. We need to be more vocal and more honest in our conversations.

Leggett isn’t sure how many trauma patients she’s treated due to TWD injuries, but she says she’s definitely seen an uptick in single-car accidents in which the driver was not intoxicated. She strongly suspects many of these accidents are due to distracted driving.

Officer Hertzell agrees. We’re seeing more unusual collisions and one-car crashes,” he says, “and while the driver frequently denies it, it’s hard to think of any reason other than distracted driving for these incidents.”

Both Leggett and Hertzell do outreach for their respective organizations. Kaiser Permanente sponsors driving simulators for teens that realistically portray the dangers of TWD. The CHP offers programs for teens, teens and parents, seniors and employee groups. Locally, Hertzell has taught dozens of safe-driving classes for groups of state employees who spend work time on the road.

The most obvious solution to this and many other driving-related dangers is self-driving, or driverless, cars. Eliminating the human element from driving may just allow us to succumb to our human tendencies—drinking, chatting on the phone, getting work done— without being dangers on the road.

By some reports, we’re still 20 to 30 years away from a fully functional, driverless automobile. But there’s no doubt that we’ll see more and more “assisted driving” technology in our vehicles as the years go on.

Already there are vehicles equipped with automatic parking assist. Similarly, there are new safety features that alert the driver when he drifts out of his lane without signaling. Equally valuable are technologies that apply the brakes of a vehicle if the driver is approaching a slowed or stopped vehicle ahead at an unsafe speed.

On the phone side, there are several apps that prohibit phone functionality when the phone is traveling at more than 10 mph. Also, there are apps that allow parents to track their children’s driving habits, including keeping track of texting while in motion.

Curbing this dangerous behavior will take a combination of solutions. Imposing criminal penalties is one strategy; creating a stigma is another. There is also hope that, because this is a problem that technology caused, it is one that technology can solve.