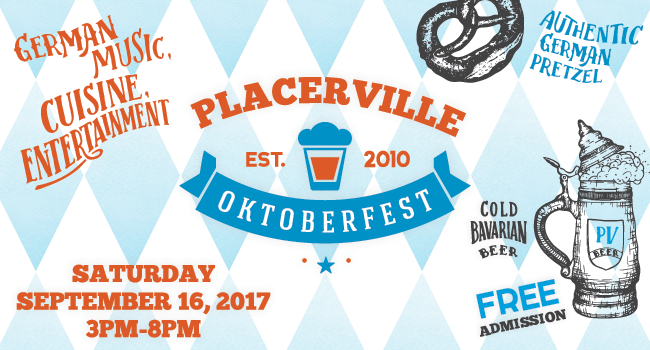 Put on your best Lederhosen or dirndl skirts to learn to dance Bavarian style and dance the night away to your favorite polka music. Enter one of the many beer contests and try your luck with das boot. Don’t forget or try some authentic German food, the family fun zone or catch the wiener dog races. Admission is free—see you there. Prost! About Oktoberfest:
Oktoberfest (German pronunciation: [É”kËˆtoËbÉËŒfÉ›st]) is the world’s largest Volksfest (beer festival and travelling funfair). Held annually in Munich, Bavaria, Germany, it is a 16- to 18-day folk festival running from mid or late September to the first weekend in October, with more than 6 million people from around the world attending the event every year.

History:
Kronprinz Ludwig (1786-1868), later King Ludwig I (reign: 1825-1848), married Princess Therese of Saxe-Hildburghausen on October 12, 1810. The citizens of Munich were invited to attend the festivities held on the fields in front of the city gates to celebrate the royal event. The fields were named Theresienwiese (“Theresa’s Meadow”) in honour of the Crown Princess, and have kept that name ever since, although the locals have since abbreviated the name simply to the “Wiesn“. Horse races, in the tradition of the 15th-century Scharlachrennen (Scarlet Race at Karlstor), were held on October 18 to honor the newlyweds. It is widely understood that Andreas Michael Dall’Armi, a Major in the National Guard, proposed the idea. However, the origins of the horse races, and Oktoberfest itself, may have stemmed from proposals offered by Franz Baumgartner, a coachman and Sergeant in the National Guard. The precise origins of the festival and horse races remain a matter of controversy, however, the decision to repeat the horse races, spectacle, and celebrations in 1811 launched what is now the annual Oktoberfest tradition.

The fairground, once outside the city, was chosen due to its natural suitability. The Sendlinger Hill (today Theresienhohe) was used as a grandstand for 40,000 race spectators. The festival grounds remained undeveloped except for the king’s tent. The tastings of “Traiteurs” and other wine and beer took place above the visitors in the stands on the hill. Before the race started, a performance was held in homage of the bridegroom and of the royal family in the form of a train of 16 pairs of children dressed in Wittelsbach costumes, and costumes from the then nine Bavarian townships and other regions. This was followed by the punishing race with 30 horses on a 11,200-foot (3,400 meters) long racetrack, and concluded with the singing of a student choir. The first horse to cross the finish line belonged to Franz Baumgartner (one of the purported festival initiators). Horse racing champion and Minister of State, Maximilian Graf von Montgelas, presented Baumgartner with his gold medal.