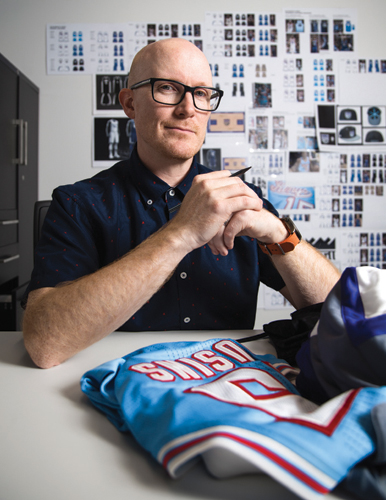 Were you aware of your creative talents as a child?
I knew early on that I had a gift for being a creative thinker and that I wanted to pursue the creative arts in some form or another. I dabbled with photography and printmaking but eventually settled on graphic design.

Did you pay attention to advertising when you were growing up?
I loved watching the Super Bowl commercials more than the Super Bowl itself. At an early age, I was interested in advertising, especially things that would make you laugh. But it wasn’t until later that I figured out that sports were a particular passion of mine.

Tell me about your days as a graffiti artist.
I was actually a pretty good kid; I didn’t stray off the path too far. Graffiti was a way of expressing myself and standing out in a culture where a lot of the kids were kind of the same. I actually got pretty decent at it to where it transitioned from being vandalism to something that people would actually want to pay for. And it taught me a lot about letter forms, typography and color harmony.

How did it feel being hired by the Kings?
When I applied, I knew that Sacramento was going through a transition. I knew about the old ownership and the fans rising up to save the team. I was blown away by the opportunity to be involved with the rebrand and dressing the new arena as the new creative director. Probably for a year straight, I would hop in the car every morning and say to myself, “Oh my gosh, I can’t believe I got this job.”

Since you didn’t grow up here, what did it take for you to “get” Sacramento?
There were times when I did feel completely foreign, especially because I didn’t settle in the city; I live with my family out in Roseville. I think what really helped me is that there are a lot of similarities between Salt Lake and Sacramento. I also loved the story of how the Lakers’ coach called this place a cow town and then the next game everyone showed up with cowbells. I feel like that’s who Sacramento is and I could relate to that: I dare you to tell me that we can’t do something so I can prove you wrong.

Do you feel the weight of being responsible for the most prominent brand in the city?
I do feel a responsibility of not wanting to let people down. But it also empowers me and gives me drive. The fact that I’m doing it on the biggest stage in the city gives me that extra motivation to make sure that what we’re doing is really being delivered at a high quality.

How has the Kings brand evolved over time?
And why is that evolution necessary? I think it’s important to look back. For the rebrand, I looked at what worked well in the past and searched for nuggets that were parts of our history that we could bring forward and add to tell an additional story. For example, we studied some of the early Kansas City Kings uniforms and looked at ways to modernize them. Our brand had become a little bit dizzy and a little bit cluttered. We needed to step back to get into a clean, modern, sophisticated space but not something too simple.

Do you have kids? What do they think of what you do?
I have three kids. They are 14, 11 and 8. They’re old enough to realize what Dad does and to come to games with me. They think it’s pretty cool. Hopefully they’re proud of me.