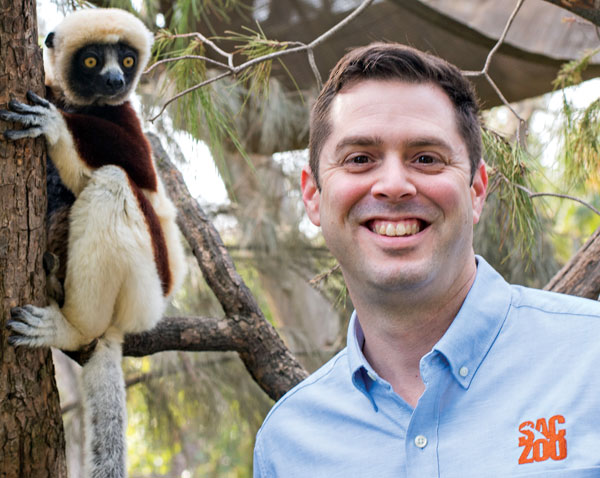 What is your earliest memory of visiting a zoo?
My first memory of going to a zoo was the old Crandon Park Zoo in Miami, Fla. The keepers were walking a young elephant through the zoo; it was maybe 5 feet tall. I got to touch it, and I’ll never forget that. For safety and for welfare concerns, we don’t really do that with elephants in zoos today, but it had a profound impact on my life.

You apparently had an early calling to be a zookeeper.
Yes. I’ve been working in zoos since I was 13 years old, either as a volunteer or as a paid employee. I started by volunteering at Zoo Miami. Some kids do sports in high school or maybe debate team. My thing was the zoo, and I was there every day after school. The zoo staff gave me keys to animal areas and I was responsible for taking care of some of the education animals such as monitor lizards, snakes and small mammals. I took the work very seriously, and when I turned 18 they hired me.

What role do zoos play today?
If we didn’t have zoos, we would need to invent zoos, because animals are facing a lot of challenges. Zoos have several roles. It’s that tripod of conservation, education and recreation. We want visitors to have a great experience. They can see animals from around the world, learn something about those animals, and hopefully make a difference for wildlife in their daily lives.

What is your vision for the Sacramento Zoo in the next 20 years?
I don’t yet have a set plan in my head, but I know what our visitors want from talking to them. I’m looking at a bunch of different scenarios. If we’re going to be a world-class zoo, we need to remove some species and remove some older exhibits. We’re going to be moving some of the species we have into larger areas. The decisions we make in the next 10 years will shape the zoo for the next 50 years and maybe beyond.

Is expansion of the zoo footprint an option?
That wouldn’t be my decision. That would have to come from the community. The zoo has had the same footprint for roughly 90 years. We have to figure out the best design for the footprint that we have.

What changes do you foresee in the next three to five years?
At this time, we are looking at bringing in meerkats. It’s a long process because meerkats are a heavily regulated mammal, so there’s a very lengthy permit process to obtain them. But we know the effort is going to be worth it because they are extremely popular.

Do you have a favorite zoo?
There are many things that make each zoo admirable. If I had to tell you the best zoo in the world, though, it would be the three zoos that are operated under the umbrella of Zoos Victoria in Australia. There is no zoo better in the world than this trio at engaging their guests to make a difference for wildlife and conservation.