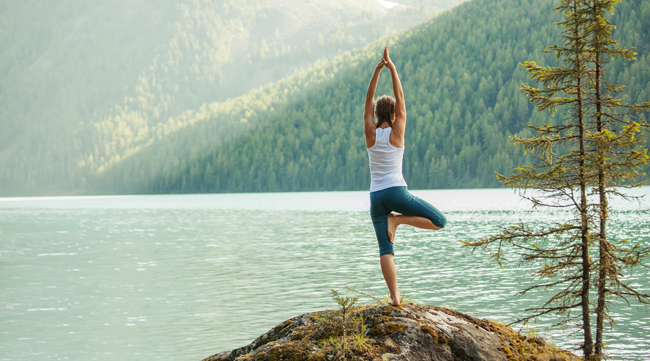 When my serious boyfriend broke up with me one morning this past December, I thought I’d never be able to face the world again.

But I didn’t flunk out of graduate school that semester, my work as a counselor miraculously didn’t suffer, and I didn’t binge-watch Netflix, binge-eat Ben & Jerry’s or send my ex any embarrassing drunk texts. The world didn’t end; on the contrary, I’m happier now than I was then. So how did I maintain my dignity and thrive in the wake of heartbreak? Well, lots of therapy, first of all. But lots of yoga, too.

It would be reductive to say that losing romantic love led me to find a more personal love on the yoga mat. Yoga didn’t erase all my insecurities or make me forget that I’d once been in love with someone who left me, and I haven’t magically transformed into an egoless, patchouli-scented, chakra-opening guru. But I did shed sweat and a whole lot of tears in the yoga studio and have come out (I think) a better person for it.

My journey from yoga skeptic to amateur yogini was a circuitous one. I played around with yoga in gym class as a kid, and I wound up taking classes as a high school freshman at The Yoga Solution in East Sac. But it wasn’t serious. I mostly just enjoyed taking the evening yoga class so that I could justify scuttling over to Selland’s afterward and eating a slice of chocolate mousse torte. By the time I was in college, I had completely dropped the habit. Yoga was too expensive, I told myself, and it’s only for skinny, attractive blond women or hippies. Soon I was shunning the exercise that I had once enjoyed, looking down my nose at its practitioners for being vain or out of touch.

It was only when I began graduate school—I was studying to become a mental health worker—that I reconsidered. In the world of psychotherapy, the treatment du jour is mindfulness. Everyone in the field touts the benefits of meditation and its natural extension, yoga. My human behavior professor was a yoga teacher in her spare time. So was my practicum professor. I rolled my eyes when these professionals encouraged us to incorporate yoga into our own lives and our work with clients. Where was Freudian psychology when you needed it?

Yet when a friend invited me to be her plus-one at a class at One Flow Yoga, I took her up on the offer. At that point, I’d been a diligent weightlifter and circuit class attendee at the midtown YMCA, and I naively figured yoga would be a breeze in comparison.

I was sore for days after that single class. I was wincing over muscles I didn’t even know I had. If there was ever a humbling experience, it was trying bhakti yoga in a heated room after spending years smugly divorced from the practice. Yoga had put me in my place, and I loved it.

From that point on, I decided to recommit to yoga. Being a student, I didn’t have a ton of money to throw around, so I tried studio-hopping. Virtually every studio offers a new-student deal, often $30 for 30 days, so I jumped from place to place, feeling increasingly guilty about my wandering ways, like I was cheating the system or violating some yogic honor code. Every time I filled out a new-student waiver (yes, I’m a beginner; no, I’m not looking to lose weight; yes, I’m hoping to achieve ultimate enlightenment and ascend to nirvana through an hour-and- 15-minute exercise class), it was as if I were saying, “I’m looking for a serious relationship” when all I wanted was a one-night stand (or 30-day stand, as it was).

During my sampler-platter phase, I tried out a number of different studios, each with its own philosophical approach. I tried a studio that specialized in Iyengar yoga, which is characterized by an emphasis on alignment. Lots of very flexible older folks went to this studio, but I was looking for more of a burn. I did some Kundalini yoga, which involved a lot of repetitive limb flapping that made me feel like a particularly clumsy baby bird trying to fly the nest. Not enough elegance for me, I thought, so I moved on. Of course, I tried out bootcamp-esque hot yoga with a teacher yelling at me “quitting is for losers” while my limbs shook in 100-degree heat and a dude in a Speedo sprayed me with his sweat as he opened his Three-Legged Dog mere centimeters from my face. I bounced out of there since I’m not really into the cultlike devotion hot yoga seems to inspire, especially when the instructors make such a fuss over how many calories you’re burning and how hot your body is going to look after you regularly pay $16 to attend class but also, like, you should totally love your neighbors for their authentic selves and beauty is only skin deep, you guys.

My studio-hop schedule eventually brought me to midtown’s Asha Yoga, which I expected to be another superficial, looks-based studio based on the fact that it had a ridiculously trendy interior and featured a cold-pressed juice bar. But instead of finding self-obsessed attendees and $100 leggings everywhere, I found a new home. After just one class, which focused on deep stretching and long holds for each pose, I knew I was ready to settle down. When my 30 days were up, I didn’t leave. Asha was my glass slipper: a perfect fit.

I attended classes four, five, six times a week. I did vinyasa yoga, of course, but also yin yoga, which focuses on targeting the fascia of the body with little to no muscle engagement, and yoga nidra, a trippy transcendental-meditation style. I began connecting with the instructors, who learned my name and were always considerate enough to ask me how I was doing and clasp me in warm, welcoming hugs.

After several months at Asha, during which time I saw my strength and flexibility move to places I’d never experienced before, my relationship with my boyfriend of several years began to circle the drain. We’d bicker, he’d sulk, I’d cry. I started skipping yoga class so that I could come home early to be with him, to tend to the relationship, to try to heal whatever was broken between us. I lost the energy to focus on my physical body or my mental health; it was more important that I root out whatever was poisoning him and me. I knew our relationship was falling apart, but I wasn’t willing to pull the plug. Instead, I killed off my relationship with other things in my life. Like yoga.

The day he broke up with me, I’d been planning to go to an afternoon yin yoga class. Unsurprisingly, I didn’t make it. It was weeks before I found the courage to return to yoga and to the silence and honesty you find on your mat. When I finally returned to Asha, I spent nearly the entire class in Child’s Pose, huddled on the floor with my faced pressed into the ground so that I could hide the fact that I was crying. On that mat, I felt more alone than ever. It was the first time I’d cried during yoga, but it wouldn’t be the last.

Still, I knew that yoga was supposed to make you feel better in the end, and so I kept going even though I hated it. I’d feel terrible as I moved through my wobbly flow, thinking I’d fall apart right then and there. But I never did. All that practice had made my muscles strong, of course, but I’d also gained a better ability to concentrate and persevere. I would say to myself that I’d hate for my ex to see me looking weak. I wanted to show him how resilient I was, how I was fine now that he’d left. So I’d shake and I’d quake and I’d hold my pose and I’d breathe, and next thing I knew I’d be whipping through a challenging sequence like it was nothing. Through that consistent practice, I battled my heartbreak, and life started feeling easier and freer.

Yoga as it exists in the United States is largely treated as a workout with only flimsy connections to a spiritual practice. It began that way for me, and plenty of the time it still is. After all, there’s no denying the fantastic effects yoga can have on physical strength, flexibility and overall wellness. But I’ve also discovered yoga is a method for achieving mental strength and flexibility as well, and—at the risk of sounding terribly clichéd—it has taught me to harness my determination, discipline and gentleness. I’ve gained greater awareness of my body and my mind on my mat, and I find that I’m a more forgiving, patient and happy person when I’m in a regular practice. I see why therapists are always recommending yoga.

I don’t think yoga is the cure to all that ails, and I certainly wouldn’t recommend giving up modern medicine or good old therapy when a problem arises. But I can say this about my life post-yoga: My body is stronger than it has ever been, I can twist my limbs around like an amateur contortionist, and I’m definitely not crying over my ex. I think I’d call that a yoga success story.

STYLES AND STUDIOS (by Barbara Harvey)

HATHA—The most commonly practiced branch of yoga in the United States, hatha focuses on postural practices and techniques. The term (literally meaning “force” in Sanskrit) has become a generic word to encompass all forms of physical yoga. Find it at: Fusion Yoga, 2310 Fair Oaks Blvd.; (916) 922-9642; fusionyogasac.com • The Yoga Seed Collective, 1400 E St.; (916) 978-1367; theyogaseed.org

VINYASA—Another term that encompasses many styles, vinyasa is an energetic style that focuses heavily on the transition between poses, placing emphasis on coordination between the movements and breathing. Find it at: One Flow Yoga Studio, 5600 H St.; (916) 842-6082; oneflowyogastudio.com

BIKRAM AND HOT YOGA—A type of hatha yoga consisting of a series of poses and breathing exercises practiced in a room heated to around 105 degrees and 40 percent humidity. Practicing in what is essentially a sauna increases flexibility, but be prepared to sweat profusely. Find it at: Bikram Yoga Folsom, 1013 Riley St., Folsom; (916) 984-9000; bikramyogafolsom.com • Spotted Dog Yoga, 2780 East Bidwell St., Folsom; (916) 990-1720; spotteddogyoga.com

RESTORATIVE—A relaxing style where soothing poses are held for an extended period of time. Props are often used for additional support, as a single pose will usually be held for up to 20 minutes. Although you’ll feel the exercise, you’ll also leave feeling relaxed and refreshed. Find it at: Asha Yoga, 1050 20th St.; (916) 443-6535; ashayoga.com

PRENATAL—A style of yoga designed to be safe exercise at all stages of pregnancy. Additionally, it can alleviate common pregnancy pains and help strengthen pelvic muscles for an easier labor. Find it at: Herself Moms, locations in East Sacramento and Roseville; herselfmoms.com • Roseville Health and Wellness Center, 1650 Lead Hill Blvd., Roseville; (916) 677-1200; rosevillehwc.com

YIN—A quiet, passive style that focuses on the joints rather than the muscles, it is the complement of yang yoga. A relaxing style useful for increasing flexibility and range of motion. Find it at: Yoga Shala, locations in midtown and Arden; yogashalasac.com • Leap Yoga, 1725 Iron Point Road, Folsom; (916) 608-5327; leapyoga.net