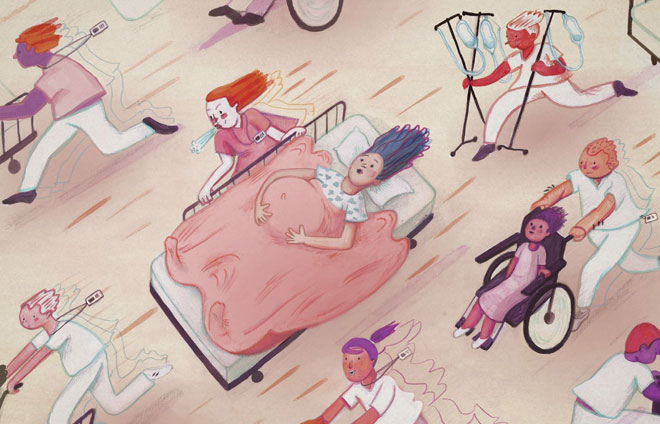 A patient who wakes up in Sutter Memorial Hospital on the morning of Saturday, Aug. 8, will fall asleep that night in the new $812 million Sutter Medical Center in midtown. Before he does, however, he’ll have been part of an extraordinary process.

The entire contents of Sutter Memorial, including equipment and an estimated 180 patients, ranging from infants in neonatal intensive care to elderly adults, will be moved from 5151 F St. to 2825 Capitol Ave.—all in a single day. It’s a marvel of logistical planning that’s been in the works for years.

“It’s already stressful enough when someone needs to be in the hospital, but when a patient needs to be moved, the stress and fear grow geometrically,” says Sue Sherman, assistant administrator for quality and safety with Sutter Medical Center. “Preventing and alleviating that anxiety by ensuring that the safety and quality of patient care continue through the move has been the fundamental goal of this planning effort.”

They’ve planned and replanned, envisioning many possible scenarios, including ones where something happens that they didn’t plan for. They’ve run drills—twice—and say they’re ready.

The big day starts at 12:01 a.m. Saturday, Aug. 8. For several days prior, nurses, doctors and other hospital staff members will go over the move schedule with patients and families multiple times, so everyone knows what’s going to happen and when.

Patients will be moved by category, starting with NICU, women in labor (who are not scheduled deliver any time soon) and patients in the emergency department who have been cleared for transport by their doctors. Despite the hour, the intent with these patients—most of whom are likely to be awake already or aren’t yet on a normal sleep schedule—is to prevent anyone from “losing sleep” due to their move schedule. Patients who need their sleep won’t be moved until 8 a.m. or later.

Given that Sutter Memorial is known as “Sacramento’s baby hospital,” it comes as no surprise that the majority of patients to be moved are newborns. Healthy newborns are one thing, but babies in the NICU are quite another. They will be under the watchful care of a highly trained life support team that is well versed in transporting this type of patient.

“Our team is very good at moving babies. We’ve been doing it for more than 30 years, bringing them in from all over Northern California,” says Patty Duncan, an assistant nurse manager with the hospital and the NICU transport coordinator. “The transport is actually the easiest part. It’s the preparations on both ends that require the most planning. And while we do it all the time, transporting 48 babies in eight hours will be quite a feat.”

Duncan says they have planned for everything—there is no room for Murphy’s Law to creep in. Every baby will be transported in an isolette (like an incubator) that functions as a mini portable ICU. The nurse-to-patient ratio is doubled from 1-1 in ICU to 2-1 during transport, and each baby’s bedside nurse stays with her every second.

“There won’t be any patient handoffs where something might get missed or unreported, and there won’t even be a discharge or admission process,” Duncan says. “We’ve constantly asked ourselves what is the safest and best thing we can do for our patients with this move, and the hospital administration has supported us to ensure these patients get the exact level of care they need. That’s really important for families to know.”

For other patients, the entire army of hospital moving staff has been divided into two teams, red and gold. Each team will be responsible for moving specific units. At the same time, squadrons of vendors with specific expertise will transport the specialized equipment from the old hospital to the new in a staggered schedule so when a patient gets to a room, the equipment will be there already.

A lot will be going on, but Sutter Memorial will remain a functioning hospital through it all. Sutter has made arrangements with ambulance companies and first responders to divert

patients to other nearby facilities when possible, and Mercy Hospital and UC Davis Medical Center have also been put on alert to take on additional patients that night. That said, anyone who goes to Sutter Memorial for care during the move will get it.

“Right up until midnight on Aug. 8, people can come to the ER at Sutter Memorial,” Sherman says. “After midnight, they can go to either facility. We’ll have staff on duty at both to provide patient care.”

A fleet of 14 ambulances—12 on duty and two in reserve—will shuttle patients the 2.5 miles between the hospitals, at the rate of one every eight minutes. A nurse will ride with every patient, and for kids, one parent can come along for the ride, too.

The average ride should take about 10 minutes along one of a couple preplanned routes. Most patients will arrive at the glistening new Anderson Lucchetti Women’s and Children’s Center, right across the street from Sutter General Hospital, which has been rechristened Ose Adams Medical Pavilion. Patients will arrive to a very warm welcome. A team of greeters will welcome everyone with balloons, cheers, therapy dogs and smiles, especially for the kids. The hope is that the kids will feel more like they’re arriving at Disneyland than the hospital.

From the lobby, patients will go to one of three color-coded “portals”: orange for adults, green for NICU and labor and delivery, and blue for children and teens. Each portal is an elevator bay that leads to new state-of-the-art care wards. The features of each respective area are many, but a few merit special attention.

Patients who go through the green portal will travel to what Sutter leaders refer to as Sacramento’s Baby Hospital 2.0, where every patient will have a private, spacious room. That feature, however, is not unique to the green portal. Every room in the new hospital is a private one.

“It’s all about keeping families together and comfortable. We call it a commitment to ‘family-centered care,’” Sherman says.

Kids who go up to the second or third floors via the blue portal may hardly feel like they’re in a hospital. The elevator doors open to a flowing work of art that traverses the entire hallway. It’s called “Steamy Windows” by local artist Jerald Silva. The best way to describe it is to imagine back when you were a kid in the back seat of your parents’ car and, to pass the time, you fogged up the window with your breath, then drew pictures with your fingers. This hallway looks just like that.

One of the gems of the children’s wing is the music therapy room, known as Sophie’s Place. It was made possible by a $150,000 grant from Forever Young Foundation, founded by Steve Young of San Francisco 49ers fame. The Young family named Sophie’s Place after family friend Sophie Barton, who played music for pediatric patients in Utah until she passed away from a heart condition at 17.

Sophie’s Place features two rooms, one where music therapists can provide small group and individual treatment, and one with two booths where kids can record their own music. This room will also be outfitted with instruments and music for kids and families to play and listen to.

As patients arrive at their rooms, they’ll discover that each has a TV with built-in DVD player for movies and video games. Family members will get a quick tour of the room and instructions on how to convert the “sofa” to a dining and game table as well as a full-size bed—something that in terms of utility and comfort is light years from the glorified recliners everyone is used to.

The staff will make sure each patient is fully settled in before saying polite farewells and rushing off to do it all over again.

Getting it all done in 24 hours is an aggressive plan, but a necessary one, as Sutter can manage to have staff operating at two locations for only so long. All the excitement of planning must have given Sutter’s staff an adrenaline addiction, however, because moving the whole hospital is only one item on their to-do list that day. Item No. 2 is launching the brand-new Sutter Electronic Health Record System, designed to help patients better access and manage their health care, communicate with doctors and lead healthier lives, that very same day.