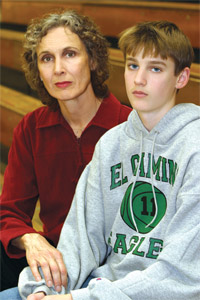 Susi Villere remembers the summer afternoon in 2002 as if it were yesterday—the Saturday afternoon her 12-year-old son, Chris, came home from baseball practice complaining of a “really bad” headache.

His temperature of 101 climbed steadily to 105 by 9:30 that night, causing Villere to call Kaiser for advice. Responses to standard questions didn’t set off any alarms: No, her son had not complained of a stiff neck, he had not developed diarrhea or nausea, he didn’t have a skin rash. Villere was instructed to add Advil to the dose of Tylenol she’d already given him and take his temperature every two hours.

The Sacramento mom was roused from sleep when Chris got up to go to the bathroom at about 3 a.m. Relieved that his temperature had responded to the medication, she didn’t think much about the bruise Chris pointed out on his thigh. “I must have bruised myself at practice,” he explained sleepily.

The following morning, Chris was hungry and enjoyed breakfast in bed—something Villere took to be a good sign. As an afterthought, she asked to see the bruise again. It was distinct-looking: about the size of a quarter—but with a perfect line around it, not with ragged edges the way a bruise often looks. “Chris said it didn’t hurt when I pressed it,” says Villere, “which seemed unusual; bruises usually are tender to the touch. I began to inspect him for more marks like it—and sure enough, I found two more spots like the one on his thigh on his back.”

They were very small, recalls Villere. “I nearly missed them.”

The spots bothered Villere. Slowly, from the reaches of her memory, she realized why: “In the back of my mind, I remembered reading an article in The Sacramento Bee about a local teenage girl who died two summers before of something like this; something that seemed like the flu, but had these spots associated with it.” One reason the article had made such an impression on her: The girl, a Loretto High School student, died. The condition, Villere remembered, was called meningococcal meningitis, a disease that’s rare in the United States but, she recalled, highly contagious.

Susi Villere remembers the summer afternoon in 2002 as if it were yesterday—the Saturday afternoon her 12-year-old son, Chris, came home from baseball practice complaining of a “really bad” headache.
His temperature of 101 climbed steadily to 105 by 9:30 that night, causing Villere to call Kaiser for advice. Responses to standard questions didn’t set off any alarms: No, her son had not complained of a stiff neck, he had not developed diarrhea or nausea, he didn’t have a skin rash. Villere was instructed to add Advil to the dose of Tylenol she’d already given him and take his temperature every two hours.
The Sacramento mom was roused from sleep when Chris got up to go to the bathroom at about 3 a.m. Relieved that his temperature had responded to the medication, she didn’t think much about the bruise Chris pointed out on his thigh. “I must have bruised myself at practice,” he explained sleepily.
The other reason?
“I was shocked that the mom—a registered nurse with 19 years of medical experience—had been fooled by this disease. Her story had made such an impact because it had terrified me. If a mom who was also a nurse couldn’t spot the disease in time, what chance do the rest of us have?
“That’s when I thought, oh, my God, we’ve got to get Chris to the hospital.”
Villere called Kaiser to tell them she was bringing her son in, that she suspected meningitis. Upon arriving, Chris had his blood taken and was almost simultaneously prepped for a spinal tap, a procedure that would determine if the infection was in the spinal fluid. Meanwhile, Villere family members were given doses of Cipro, a strong general antibiotic—even as doctors rushed to treat Chris. “It was scary, and we were terrified—but there’s something reassuring about the emergency staff running around to treat your son,” says Villere. They did not wait for the results of either test; a massive antibiotic IV was started right away.
Chris later was diagnosed with meningococcal meningitis. The intravenous antibiotics had successfully contained infection to the bloodstream, demonstrated by the fact that fluid drawn from the spinal tap came back clear, says Nancy Rosenstein, a physician with the meningitis branch of the Centers for Disease Control and Prevention, in Atlanta. “It’s the proper thing to do, but an infection in the bloodstream is just as deadly and just as damaging.” Which is why, says Rosenstein, time is so critical in treatment.
There was hope for Chris, but it would be 24 hours before doctors would know for sure that he had been successfully treated.

eningitis is caused by bacterial or viral infection of the meninges (membranes surrounding the brain and spinal cord), or the fluid and tissue surrounding the meninges, or the material that protects the brain and spinal cord. Viral meningitis is fairly common; usually the body can recover on its own. Strains of bacterial meningitis are rare, but potentially fatal. Common forms are contagious, caused by several types of bacteria that cause upper respiratory tract infection (in the nose and throat) and travel through the blood and/or the spinal fluid directly to the tissue surrounding—and eventually directly to—the spinal cord and the brain.
No one knows for sure how Chris Villere got meningococcal meningitis—perhaps, his mother suggests, by sharing a water bottle at practice with a teammate, or even catching some mist from a bacterially infected sneeze. “No one else on Chris’ team got sick, or even felt ill,” Villere points out, highlighting the fact that most of us are, at one time or another, healthy carriers of the meningitis bacteria—it sits in the backs of our throats. “Roughly 20 to 30 percent of us will carry the bacteria without knowing it,” says Amy Nichols, R.N., manager of the Office for Infection Control in Berkeley, a city that experienced an outbreak of meningococcal meningitis two years ago. “We do not know how this bacteria manifests itself as a deadly form in some individuals but not in others. We do know that one of the ways it can be transported is through saliva: by swapping spit, in other words.”
Teenagers are especially susceptible because they frequently share food, water, beverages, lip gloss and lipstick. And they kiss, of course. College freshmen are susceptible because they often live in close quarters or dormitories. For similar reasons, children enrolled in day care centers also are very vulnerable. And it is believed that some individuals are more likely to contract the disease if their immune systems are compromised in some way—through conditions such as lupus or HIV infection, for example—even simply from being very fatigued.

The mother Susi Villere so vividly recalls reading about is Rose Kwett, founder of Meningitis Awareness Key to Prevention, a local nonprofit organization committed to educating others about the disease. Kwett is the force responsible for recent legislation requiring the state of California to inform incoming college freshmen about meningitis and the vaccinations available to prevent infection. She visits schools in the area to educate students and interested parents (“anyone who will listen,” she says) about the condition that killed her own daughter, 15-year-old MaryJo Kwett, five summers ago.

Education and awareness are critical, says Kwett, because when a person becomes infected with bacterial meningitis, he or she must be treated immediately. “Healthy at breakfast, dead at dinner,” is how MaryJo’s father, Peter Kwett, characterizes the disease’s deadly speed.

The condition also is sneaky; Villere says that doctors admitted to her that had she not pointed out the spots on her son’s body (which indicated septicemia, or blood infection), and been aggressive about demanding tests for meningitis, chances are they’d have sent Chris home with a diagnosis of a bad summer bug. “He didn’t develop all of the telltale symptoms: The stiff neck, the sensitivity to light; even the rash was barely noticeable at first,” says Villere. “If I hadn’t known what to look for, and what to be concerned about, Chris might be dead,” she insists.

Kwett argues that the biggest tragedy about her daughter’s death from bacterial meningitis is that it could have been prevented. MaryJo, who had returned from a missionary school project in Mexico 10 days before she fell ill, was seen by a doctor before her trip across the border and vaccinated for “anything she might be susceptible to,” Kwett says. Still, MaryJo was not vaccinated for meningitis. Both MaryJo and Chris were diagnosed with type C meningococcal meningitis, which is vaccine-preventable.

In 2004, by November there were only eight cases reported, and no deaths, and no cases reported in the month of December, which usually is the peak of the cold and flu season. The same hygiene measures taken to prevent the flu—frequent handwashing and not “swapping spit,” for exam-