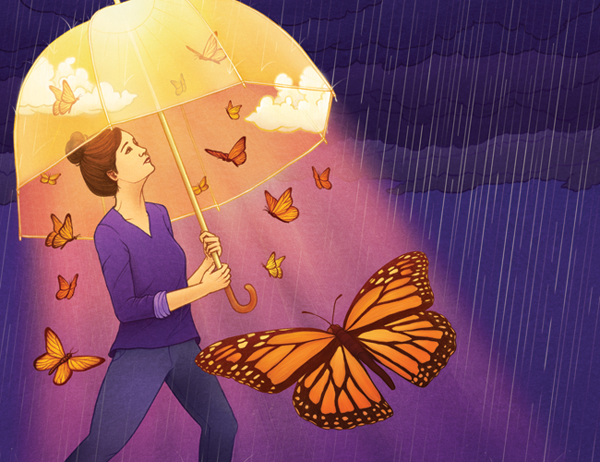 Lessons in coping with chronic illness.

Normally, illness is an uncomfortable inconvenience. You commiserate with co-workers after a sick day or two. But what if that illness were to last anywhere from months to the rest of your life? Chronic disease may be managed with medication but not cured. The side effects might be unpleasant—not to mention the prospect of greater infirmity, lost longevity or frequent engagements with the health care system.

A 2009 report from the Centers for Disease Control said approximately 133 million Americans (about 40 percent of us) have at least one chronic illness such as diabetes, heart disease, arthritis, osteoporosis or cancer. By 2020, that number is projected to reach 157 million. In fact, almost a third of the population is now living with more than one chronic illness.

If you don’t have a chronic illness yourself, you probably know someone who does. I have some arthritis in my left foot and hypertension checked by meds—not too bad. My wife has sciatica. It’s a pain in the ass (literally) that comes and goes. But here I’ll share with you stories of two friends who’ve had a tougher journey and how they’ve learned to live with it.

“Ten years ago, when I was 26, I went to the doctor for an unknown lump on my backside,” says Christine. “It turned out to be an abscess. Then it developed into a fistula. It took five surgeries to fix. But they didn’t identify the underlying problem. . . .”

Suzie suspects that her childhood—­marked by “anxiety, the absence of a mom, forced diets, insomnia, bullying and a ton of antibiotics”—had something to do with the many ailments that beset her later. The first round came at 18 with chronic pelvic pain. “It was an embarrassing pain and it meant I took even more antibiotics because they thought it must be an infection. Then I started to get vaginal infections, probably from the antibiotics,” says Suzie, “and that took over my life.” Just as she would figure out how to manage one set of symptoms (or not), others would arise. Now in her 50s, Suzie has a medical history as long and complex as a Michener novel.

Caroline Giroux, M.D., is a psychiatrist and associate clinical professor with UC Davis Health System. She often counsels chronically ill patients and says that, difficult though they may be, symptoms do serve a key purpose. “Unpleasant emotions or physical discomforts aren’t necessarily bad,” says Giroux. “They are signals trying to convey there’s an imbalance we must attend to.”

Finding out you’ve got a chronic disease can produce a flood of emotions. A diagnosis of type 2 diabetes, for example, is often associated with feelings of guilt and shame. Another common reaction is grief. And yet sometimes the diagnosis is appreciated, if not welcomed.

For years after that first surgery, Christine endured ongoing infections and painful flare-ups. Then, just weeks after the birth of her first child, Christine experienced severe pain and fever and was hospitalized again. This time they diagnosed her with Crohn’s disease, an inflammatory bowel disease. “I finally had a name to what was causing all my problems,” says Christine. “It was a little relieving, but also scary because it can always get worse.”

For Suzie’s ongoing pain, fatigue and nausea, no two doctors ever agreed on a diagnosis. She ultimately decided herself. “I settled on fibromyalgia as my most likely culprit,” she says. “But that doesn’t mean anything since it’s just a collection of symptoms and they don’t know what causes it or how to fix it.”

Giroux acknowledges the medical establishment can’t always give us the answers we seek. “We are the experts on ourselves and our lives. Each professional we meet, regardless of their credentials, will only have a limited piece of the puzzle,” says Giroux. “It ultimately falls on each person’s shoulders to integrate those elements into a conceptualization that makes sense to them.”

It’s easy to feel overwhelmed by chronic illness, but the good news is there’s a mountain of evidence that attitude and action make a big difference in one’s quality of life. A study of women with breast cancer found those who felt resigned to their fate were psychologically less well-adjusted three years later, compared to women who actively confronted their diagnosis. A similar study found those who sought social support and used active coping strategies—such as developing a plan of action—reported more inner peace and satisfaction with life two years later, compared to women who tended to deny or avoid their diagnosis.

“There’s no one-size-fits-all prescription or wellness plan,” says Giroux, but the healthy response to chronic disease is what she calls “lifestyle hygiene,” which centers on “healthy diet, regular restorative sleep, harmonious relationships, sense of purpose, physical exercise and mindfulness practices.” In short, attending to mind, body and soul.

This can be a challenge for everyone. However, with the stakes now raised, you have more incentive to act. One proven method is called “self-management.” It begins with you and your doctor working together to set goals, then systematically pursue them. It looks like this:

You can help yourself by learning more about your condition, listening to your body and tracking its changes so you can provide your doctors with accurate updates. If you have heart disease, for example, learn to check your blood pressure, weigh yourself regularly and chart your symptoms. This kind of home monitoring helps you spot potentially harmful changes before they turn into real trouble.

There are people who want to help you. Be clear about what you need from them, such as help with meals or the school car pool. “We’re often hoping the other person’s going to read our mind,” says Giroux. “But it doesn’t work that way. Verbalize ‘this is what I would like from you. Can you offer it to me?’”

You can also recruit family or friends into the effort. The lifestyle changes needed for most chronic conditions, such as high cholesterol, are good for everyone, so make it a group effort.

Illness can also put a strain on relationships. Find strategies to make sure your thoughtful helpers get the attention they need, too. That might include planning “alone time” with your partner or giving them time apart for their own self-care.

Some of the best support networks might be with people you haven’t met yet. Suzie found this to be a vital part of her own wellness. “Friends are sympathetic, but they do have their own lives to live, so you often have to rely on yourself.” Her advice is to “find a support group, online or offline. You need people who are willing to hear you talk about the tough things.”

Feeling sad or shocked is an understandable reaction to bad health news, but if it lasts longer than a couple of weeks, you might consider whether you’re at risk for depression. Not in just the bad mood kind of way. Clinical depression is a serious medical illness with compound negative effects, starting with behavioral tendencies that might be at odds with your health needs. It may inhibit you from taking medications, seeing your doctor as needed or maintaining healthy eating habits. The constant flood of stress hormones can cause systemic inflammation or metabolic changes. Physical symptoms include fatigue, trouble concentrating, disrupted sleep, body aches and digestive problems.

“We have to be holistic in our approach and address all layers,” says Giroux. “And sometimes it’s impossible to determine which came first. To break that cycle, we have to have a multimodal approach.”

Adjusting to the New Normal

Everyone is different, but accepting one’s condition and finding pathways to gratitude and personal growth are perhaps the best ways to mentally deal with chronic illness.

Christine says humor and “looking at the bright side” have been her coping mechanisms. “I’ve been thinking of seeing a therapist to address underlying anxiety, but for the most part I push it down and go about my day-to-day life. I always think it could be worse. I joke, ‘At least I still have my colon.’”

Suzie says, “The smartest thing I’ve done is to accept that I’m never going to be normal. I haven’t given up feeling better, but I had to give up on being cured. I know this sounds hackneyed, but I am grateful every day for the good things I experience. After your own survival is handled, you have to figure out ways to grow and help other people. I like to be involved in helping my friends because, even though they aren’t sick, they have real problems, too.”