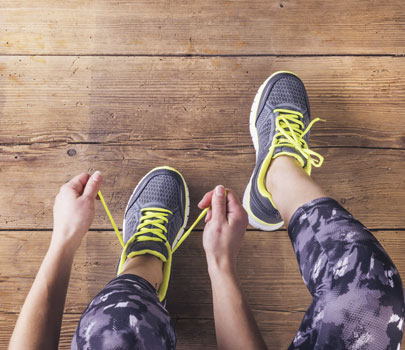 You start to notice them every year as summer winds down and fall creeps in. They are up before the sun, outfitted with headlamps and GPS watches and compression socks and tool belts loaded up with water bottles and electrolyte replacements. They travel in packs along the American River Parkway and on solo missions around McKinley Park. They are runners, sure, but they are more than that. They are marathoners, and they’re training for the California International Marathon.

This year, they’ll cross the finish line on Sunday, Dec. 4, some of them for the very first time, some for the 34th. Whether they trained alone using a generic online training plan or with one of the Sacramento Running Association’s comprehensive training groups, they’ll all run the same 26.2-mile course from Folsom to the State Capitol, running along Fair Oaks Boulevard for the majority of the course and heading into the final miles beneath a canopy of trees ablaze in fall colors. To witness it is to see the heart of Sacramento displayed in real time right before your eyes—the orderliness of the logistics, the enthusiasm of the spectators, the dedication of the runners, the electricity of a marathon that feels both homegrown and world-class all at the same time. The CIM origin story is like that of many of Sacramento’s iconic events: A few locals wanted to do something big with their passion and use it to highlight what they love about the city. In this case, those locals were competitive runner John Mansoor and Fleet Feet founder Sally Edwards, who were joined by developers Bill Cummings and Angelo Tsakopoulos. Mansoor and Edwards were both deeply entrenched in the running world and had dreams of establishing a world-class marathon on their home turf, while Cummings and Tsakopoulos wanted to promote the city of Folsom, where they were working to build new developments. Mansoor regularly ran a route from Fair Oaks to the Folsom Dam and had fallen in love with the view of the Sacramento skyline from the dam, which is serendipitously 26.2 miles away from the Capitol building. So with that, in early 1983, the course was set.

Dr. Steven Polansky, who moved to Sacramento in 1977 to start an OB-GYN practice, was one of approximately 1,600 runners who crossed the first CIM finish line in December 1983, and he’s crossed every CIM finish line since, making him one of 12 “streakers” to have completed the race all 33 years. “There were no real opportunities for long-distance running in the early ’80s,” recalls Polansky. “I started running for the health benefits, and then I heard about the Sacramento Long Distance Running Association—now just the Sacramento Running Association—and this marathon they were putting on.” He registered, trained and finished that first CIM as a marathon convert. “I just absolutely fell in love with the race,” he says. “I loved the course, going through all the neighborhoods, everything about it.”

Shockingly, the race course remains entirely unchanged since its creation 33 years ago. “It has not changed one inch,” says Polansky, who joined the SRA board in 1984. “Tradition is important,” he notes, crediting the numerous cities that are affected by the course for facilitating the necessary infrastructure, as well as Union Pacific, which holds off its trains on the race course every year. Plenty about the race has changed, of course. Alyssa Hernandez, SRA’s director of community relations and event marketing, notes that registration is up for CIM, which now hosts close to 15,000 runners between the marathon, four-person relay teams and 2.62-mile fun run. “There’s a lot of hype this year,” says Hernandez. “We’re reaching our peak numbers, where lots of other races in the industry are down. With all the changes in Sacramento over the last few years, this is another way to be involved for a lot of people, to finish at the Capitol and experience the city in that way.”

Hernandez helps oversee all the running clubs and training programs that ready those for the CIM, including the 50-person “first-timer” group. Open to runners who are running CIM as their first marathon, the group offers special training plans, seminars and support that includes a private Facebook group. “It’s really cool to watch them support each other and cheer each other on,” says Hernandez, who ran the race in 2011 and 2012. “It’s intimidating to train for your first marathon, but they’re all in it together.” Some runners travel a great distance to run the CIM, often in hopes of qualifying for the Boston Marathon. With a 340-foot net decrease in elevation from the start line to the finish, the race is dubbed “the fastest course in the West” and has become one of the most popular marathon courses for runners hoping to “BQ” (Boston qualify, in nonrunner parlance). Perhaps that’s the most Sacramento aspect of the CIM: luring people here en route to somewhere more prestigious, only to win them over in the process.

Matt Sorenson, co-founder of running podcast Runified, ran CIM as his first marathon in 2012, having traveled to Sacramento from Austin, Texas, with his running club for the race. His goal that year was simply to finish, which he did. The following year, he returned hoping to finish with a time that would qualify him for the Boston Marathon. “I could have done a local race the same weekend,” remembers Sorenson, “but CIM piqued my interest because it is a relatively fast course, and I thought doing the point-to-point course (versus a loop) would prep me well for Boston,” which is also a point-to-point course. Despite the below-average temperatures on race day in 2013, Sorenson ran the race in 3:03 and earned a spot at Boston. “I teared up when I made that last left turn on Capitol Mall toward the finish and saw the clock,” he recalls. “CIM will always hold a special place in my heart.”

Polansky has run the six “World Marathon Majors”—the Tokyo, Boston, London, Berlin, Chicago and New York City marathons—in addition to his 33 CIM finishes. He points out that, while prestigious races have a certain bucket-list appeal, they’re complicated to navigate. “First you have to qualify,” he says. “Then there’s the lottery, the travel expenses and the hotel stay. In a lot of cases, just getting to the start line is very difficult.” He recalls waiting around in frigid temperatures for nearly an hour before the start of the New York Marathon. “You’re exhausted before you even start running.”

In contrast, he describes the CIM as a “good, wholesome race with great support.” Sorenson agrees, noting that it is “one of the most organized and accessible races I have been a part of, including the amazing number of portable toilets at the start,” a logistical component that is not at all by chance. The race website even boasts “more porta-potties per runner at the start and along the course” than any other race course. If you’re a runner, you understand why this is a selling point.

If you’re not a runner, you can enjoy the CIM as a spectator sport. With around 50,000 spectators lining the course every year, the fans actually outnumber the runners by a long shot. “This community really cares about the runners,” says Polansky. The event generates $8 million to $10 million in revenue for the region and typically sells out every hotel room in Sacramento and Folsom on the weekend between Thanksgiving and Christmas, when tourism would usually stall out.

There’s something special about watching 9,000 people do something nearly superhuman on an otherwise ordinary Sunday morning just down the street from your dry cleaner or your office or your kids’ school. There’s something poignant about watching your neighbors and co-workers and total strangers approach the grand Capitol building as beacons of what the human spirit can accomplish, exhausted and triumphant as they receive their hard-earned medals. With a course that’s stood the test of time for more than three decades, during which nearly everything else in the city has been subject to reimagining and renovation and rebirth, the CIM is more than just a tradition. It’s part of Sacramento’s DNA. Runners and spectators flock to the race for various reasons: perhaps using the full six-and-a-half-hour time allowance to finish their first marathon, perhaps to BQ, perhaps to keep their 33-and-counting streak alive, or perhaps to see the city—and its people—from a perspective that is only found at street level. No one goes home without a Sacramento story, though. Everyone earns one of those on CIM race day.

Where To Watch the Marathon:

Mile 6, as the course turns from Oak Avenue to Fair Oaks Boulevard. Always a good crowd, because it’s the location for the first relay exchange.
Mile 10, in Fair Oaks Village. Usually there’s a band and some cheerleaders. Small-town feel, complete with chickens crossing the road in front of runners. Good place to get coffee.
Mile 16.5, near Bella Bru Cafe and Willie’s Burgers at Arden Way and Fair Oaks Boulevard. Wide-open spot to watch the runners go by.
Mile 20, around Loehmann’s Plaza, Fair Oaks Boulevard and Fulton Avenue. The wall, where even the most seasoned runner can run out of fuel, crops up at this point. Watch runners smash through the wall or bend over in agony as they gamely move toward the finish 6 miles away.

CIM by the Numbers: