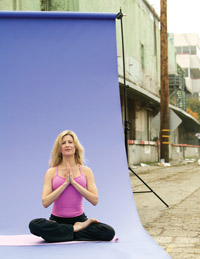 Take one look at Rose Zahnn and you automatically assume she’s one of those people.
You know the type: prefers broccoli to brownies, would rather run than watch TV and is always complaining that she can’t find clothes small enough to fit her.

But upon meeting the very fit and friendly Zahnn, one of the first things you learn is that she’s not one of those effortlessly thin people.

She’s worked—and continues to work—hard for her body: all 5-feet-6-inches, 17 percent body fat and size two of it. (Zahnn, 41, says she weighs the same as in her “heavier” days, but that her body fat has decreased by nearly 13 percent.)

As a teenager, Zahnn, valedictorian of her graduating class at Bella Vista High School in Fair Oaks, was more apt to hit the books than the playing field. “There was no working out just for fitness or for health; it was all for scores, and I’m not particularly competitive,” says Zahnn. While her mom, dad and older sister were not couch potatoes—they gardened, walked the dogs, walked to school—Zahnn says she just wasn’t moving much. And although she wasn’t heavy, she adds, her body fat was too high. Then, late in her high school career, she discovered running. In college, during the early 1980s, she took up aerobics and weight training. She lost body fat, toned up and started to eat more healthfully.

After graduating with a bachelor’s degree in theater arts from UCLA, Zahnn went to work for a health club in Manhattan Beach, where she taught aerobics, did some personal training and worked her way up to management. She did the same at a health club in Reno, this time learning the business side of things, including sales and advertising.

When Zahnn moved back to Sacramento in 1989, she continued on her health and fitness career path, teaching classes at a few clubs in Sacramento. Still, she wasn’t sure she wanted to make it her life’s work.
She briefly entertained the idea of becoming a physical therapist, but “I decided I wanted to work for people who want to come to me,” she says, “not who have to.” At the time, she had some clients who were not entirely comfortable working out in a typical gym. Zahnn sought a remedy for them. She wanted to create a workout place that people found fun, a community—“not,” as she explains, “a gym where you can’t look at the person next to you on the treadmill even though you’re next to each other for 45 minutes.” She wanted a place where “people can support each other and have a good time.” In 1993, Healthy Habits was born.

Bringing a Vision to Life

Zahnn’s Healthy Habits Fitness & Yoga Studio in Sacramento’s midtown is open to both men and women, and its clientele runs the gamut from trim athletes to those seeking to lose 100 pounds. In keeping with Zahnn’s vision, the atmosphere is gentle—there’s no music blaring out of speakers or an intimidating number of machines and gadgets—and homey. A basket of apples awaits you at the front counter and a staffer greets you like an old friend, not another membership number.

When you take a class from someone with a degree in theater arts, you can expect some theatrics. The theme for her Lean for Life class in the fall was “Survivor,” modeled after the reality TV show. (To help clients get in the mood, Zahnn decorated the workout room with a jungle/island theme.) One Halloween, Zahnn offered a “haunted” yoga class; participants wore costumes to class. “Exercise doesn’t have to be boring,” Zahnn explains. “It’s as fun as you make it.”

She also offers a karaoke spin class, where participants sing their hearts out as they put the pedal to the metal. “It’s a way for people to cut loose a little,” Zahnn says. “The badder the better.”
Calling her own progression toward fitness “slow and steady,” Zahnn seeks to motivate people to change their lifestyles—on their own timelines.

Zahnn’s workday sometimes stretches to 9 p.m., leaving her little time to pursue her hobbies: biking, skiing and running. But she doesn’t feel like she’s missing out.

“My work is so fulfilling,” says Zahnn, who’s never married and doesn’t have children. “I get social interaction. I get physical exercise. I get mental stimulation from running a business. It’s very fun. I get to play.”

That’s not to say this former local theater alum—Zahnn has performed in  productions both here and in Reno—has abandoned all dreams of being on stage again.

“My dream career would be performing, singing and acting, and then I would have the money to devote time to work with the animals,” says Zahnn, who calls herself “the Jane Goodall of bunny rabbits and dogs and cats and llamas.” “I love animals, and they seem to come to me,” she says, joking that someday she’d like to open up “Healthy Habits Fitness & Yoga Studio & Animal Sanctuary & Healthy Cafe & Wine & Bakery & Spa Ranch Retreat Resort.”

Whew! In reality, she’ll be content to get back into local theater—one of these days. For now, she spends her spare time cooking healthful gourmet recipes. (This month, Zahnn plans to release a Learn To Be Lean program workbook; a Learn To Be Lean cookbook is on the horizon.)

Zahnn knows the healthy-habits drill: eat right, exercise regularly. So does she ever have days when she’s feeling, well, less than fit?Yes, she does.

“When I have ‘fat’ days, I make an extra push to eat something healthy,” Zahnn says. She’ll fit in some exercise—not as a punishment, but to get over the hump. She says she feels motivated afterward. “You always feel better, never feel worse.”

Zahnn says she tries to eat a lot of vegetables—“Although it’s hard, especially if you work a lot,” she admits—and strives to keep her meals “lean and clean,” sans sauces, cream and other high-fat additions.
What about craving broccoli over brownies? Not so. Zahnn admits a penchant for baked goods including German chocolate cake and those aforementioned brownies.

For Zahnn, it’s all about balance—a belief she tries to instill in her clients. “If you’ve got a big party coming up where you’re going to eat a lot of rich food, great. So the rest of the week, eat pretty healthy. Don’t starve yourself, but balance it out.”

“Getting fit and healthy involves a simple concept,” according to Zahnn. “People need to develop healthier habits,” she says. “That’s why it’s called Healthy Habits and not Rose’s Gym.”