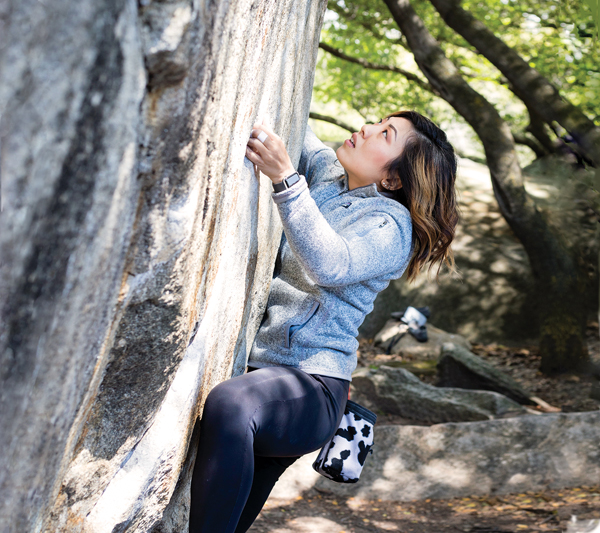 It’s addictive. It’s a great way to make friends. It’s beneficial for your health. It’s climbing, and everyone is doing it. Once it was considered a fringe sport, but now more people than ever before identify as climbers: people who scale indoor and outdoor rocks and mountains for recreation, sport or simply because why the hell not? Making its debut at the Olympics in Tokyo this year, climbing isn’t a trend—it’s a transformative exercise for both mind and body that climbers argue everyone can benefit from. “You don’t have to have a certain body type or be super strong or super fit. You just come in,” says Vaughn Medford, general manager of Sacramento Pipeworks Climbing and Fitness. Here’s the lowdown on how, why and where to get high.

Why Climb?
Acrophobia, or an extreme fear of heights, is routinely listed as one of the most common phobias in the United States, along with public speaking, insects and needles. For many of us, Ferris wheels, balcony rails and zip lines are to be avoided, much like politics chatter over Thanksgiving, but for an increasing number of adventurers, hanging out tens—and even hundreds—of feet above the ground is just another Friday. Why?

Tom Hipp is 60 years old. He manages an auto shop, likes to ski, is a West Coast swing dancer, and when it’s nice outside, he climbs 400 foot-cliffs. “It can be scary sometimes,” he admits, “but I found that overcoming fear when climbing has helped me in other areas of my life. I run a business, which can be scary, but climbing helped me work out how to do things that I was [professionally] afraid to do.” Tom says he’s also the healthiest he’s ever been in his life, thanks largely to climbing. “I expect to be able to climb into my 70s, at least,” he says.

There’s also a sense of community. “Climbing can be a beautiful way to deepen both the connections with our bodies and people,” says Mandi Saeteun, a 32-year-old UI/UX designer and organizer of communities that seek visibility and inclusion in Sacramento, including WomxnWorks (a supportive climbing group for womxn). Looking to temper the stress of her job and meet new people, she started climbing at Pipeworks, where she quickly fell in love with the sport. “One of my favorite things to do is tackle a boulder route with another person,” she says. “Everyone brings a slightly different approach to climbing the same route. With mutual and respectful collaboration, new ways of using our bodies can be unlocked. When you accomplish a climb through this experience, it can be really rewarding.”

It’s a great way to practice mindfulness, or the art of “being here now.” Medford praises the meditative aspect of climbing: “It takes 100 percent concentration,” he says. “Nowadays, there are so many distractions in this world, and people are always partially focused on something else. Climbing allows—it demands—full concentration.”

And then there’s the mental workout. “The creative problem-solving aspect of climbing is what sets it apart from a traditional workout,” says Kilian McMann, a 26-year-old freelance graphic designer and illustrator who teaches climbing at the West Sacramento Recreation Center and sets the wall’s new routes. “Trying to figure out the perfect sequence to move your body to get up a wall is just fun, even when you fall. For me, it’s more interesting than reps in a weight room, and when you complete a route, it’s more satisfying than finishing a set on the bench press.”

And, lastly, it’s fun. Who can say that about the elliptical machine?

I Have No Upper-Body Strength. Am I Doomed?
The ability (or lack thereof) to do a pull-up is not a barrier to entry. “After almost three years of climbing consistently, I can only do three really solid pull-ups—but this alone would be a bad indicator of a climber’s potential,” Saeteun says.

What’s more important than upper-body strength? Footwork. “Really strong footwork techniques can reduce the strain from your arms, which are what usually become depleted as they fill with lactic acid,” she explains. “By saving the energy in the arms, you create more efficiency.”

Noah Rezentes, assistant staff manager at Granite Arch, a climbing gym in Rancho Cordova, agrees. “Footwork might be way more important than upper-body strength. The way you twist your feet on most footholds changes your upper-body position. It’s a misconception that climbing is all about upper-body strength,” he says.

It’s also a workout for your butt—and everything else. “Everyone thinks that you’re pulling yourself up by your arms all the time, but it really isn’t that,” Hipp says. “It’s more core and lower body. Climbing has helped me develope my gluteal (buttock) muscles.” And, while some routes certainly can be easier if you have more upper-body strength, new climbers don’t have to climb them until they’re ready: “Some climbs are just like climbing a ladder,” he explains.

But It’s Dangerous. You Can Fall, Right? And Potentially Die?
According to the annual publication Accidents in North American Climbing, 22 deaths were reported in 2018, but the vast majority of deaths and serious accidents takes place outside of climbing gyms on actual rocks, with most being preventable with safety checks, protection and good communication.

“It’s very difficult to get hurt in a climbing gym. It’s a safe and controlled environment,” says Hipp, who has been climbing for 17 years.

From his experience in both climbing and working at a climbing gym, Rezentes says most injuries occur when people overwork the tendons in their hands, which is something he’s done himself. “I worked my hands too hard too often and didn’t listen to people who said I needed to warm up,” he says. “Injuries are typically user error like that—mostly people overworking their bodies. We don’t have ER kind of injuries very often at all.”

And as for injuries that do require medical attention? “In my medical practice, I have seen minor strains and sprains to the upper back and shoulders in novice climbers who either didn’t prepare by stretching well beforehand and donning protective gear, or who overdid their climbs before they built up their tolerance to the unique challenges of the activity,” says Matthews. “I have seen a few serious injuries, including skeletal fractures and head trauma. Fortunately, all of these injuries occurred in experienced climbers wearing protective gear, so they [recovered].”

Carlo Traversi, who owns the Sacramento bouldering gym The Boulder Field, is a professional climber who has been climbing for 18 years, was a two-time Sport Climbing National Champion and has competed as part of the U.S. National Team for more than 10 years. His worst injury? A sprained ankle. That isn’t to say that climbing isn’t dangerous—but with proper precautions, it’s as safe as, if not safer than, other sports and athletic pursuits.

Learning the Ropes (or Lack Thereof)
Most gyms will offer bouldering, top roping and/or lead climbing. Many climbers alternate between the three, although some prefer just one.

Bouldering: A form of climbing performed on small rock formations or artificial rock walls, typically no higher than 15 feet, without the use of ropes or harnesses.

Traversi says: “I prefer bouldering because of the social nature of it. It’s hard to have conversations with people when you are 50 feet up a wall, but with bouldering, it’s all about problem solving, sharing information and pushing each other on shorter challenges.”

Top Roping: A form of climbing where the climber is securely attached to a rope that passes up and through an anchor system at the top of the climb, and down to a belayer at the foot of the climb.

McMann says: “Top rope is fun and gives you a little more time to figure out the route, where lead climbing carries more mental strain and a lot more gear.”

Lead Climbing: A form of climbing that can be done solo or with a group. The climber uses a self-locking device that is used to arrest a fall. One end of the rope may be anchored below the climber with the coils of rope in a bag or on the climber’s back. For single-pitch climbs, the device may be secured at ground level, with the climber tied into the end of the rope.

Hipp says: “Top roping is pretty low key and safe, but with lead climbing, the stakes go way up. It’s more challenging and about overcoming fear. A lot of climbers can handle lead climbing physically but not mentally. The fall is greater and farther, and it’s not just a simple and straightforward thing—there are body movement and equipment technicalities, too. I’m a very technical person, so I was interested in that.”

Elevation for All
“If you’ve attended a climbing gym or climbing crag, you’ll often find that it is a sport dominated by white males,” Saeteun says. “This can be attributed to the burdening costs of entry (shoes, chalk, a harness and carabiner can start at $150, not including the monthly membership) or perhaps because historically, recreational sports such as climbing were a luxury afforded to those who had free time and mentors. Whatever the case may be, it can be difficult to feel welcomed or brave when you arrive at a place when no one looks like you. WomxnWorks is about changing the norm and elevating womxn to confidently own that space, while feeling safe and supported by a community.”

WomxnWorks is a climbing community for womxn who are interested in gaining confidence, building strength and creating new friendships. The group meets at Pipeworks in Sacramento on the first Friday of each month at 6 p.m. It has grown from six members in 2018 to meet-ups of 40 today, with an active Facebook community of 300. The meet-ups are fun and informal, beginning with introductions and discussions, which range from the fear of falling to goal setting, or technical talks, which cover everything from essential knot-tying to footwork. After an hour, everyone pairs up and climbs together. Participants range from veterans to first-timers. For more information about WomxnWorks, visit womxnworks.com.

Where To Climb
Sacramento Pipeworks Climbing and Fitness
116 North 16th St.
(916) 341-0100
touchstoneclimbing.com/pipeworks
Perks: It has bouldering, top roping and lead climbing, plus a variety of classes (CrossFit, yoga, cycling and jiu-jitsu). There’s an enormous gym, 40-foot-tall lead wall, more than 110 climbing routes and a slack line.

The Boulder Field
8425 Belvedere Ave #100
(916) 329-8994
theboulderfield.com
Perks: It’s one of the largest bouldering gyms in the country at 33,000 square feet. There’s an in-house cafe with coffee, kombucha and beer, plus yoga classes and cardio and strength-training equipment. There’s also a smaller bouldering wall meant especially for kids.