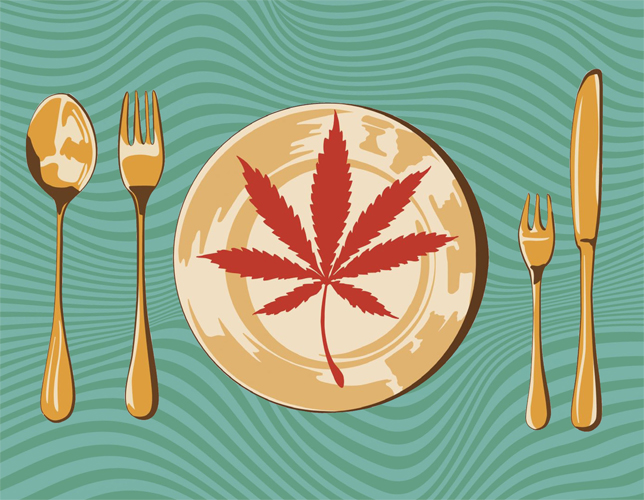 I have a confession. I graduated from UC Berkeley (or Berserkeley, as one of my mom’s friends used to call it) but I don’t know anything about pot brownies. Or cannabis cheese crackers. Or “grown-up granola.” Or Cheeba Chews. Or… you get the picture.

Edible marijuana has been around for centuries as both a medicinal and recreational foodstuff, so it makes sense that there are more creative ways to ingest it than there are terms for the drug itself. (And enough clever wordplay in its product names to make even the most skeptical writer choke on her Dank Grasshopper chocolate bar with laughter.)

But because I pursued my higher education at Cal and not the highest education I could have (I promise, the puns will stop soon), I enlisted two edibles experts to guide me through the wild world of cannabis comestibles and, hopefully, to somewhat demystify this foreign frontier—especially on the heels of the passage of Proposition 64 on Nov. 9 of this past year, which made it legal for individuals to use and grow marijuana for personal use. (More on that later.)

My first question when I set out to research and write this piece is one that made me feel like such a novice I almost cringe to admit to it: What exactly is an edible? Lucky for me, Elise McDonough, the edibles editor at High Times magazine—the publication that has been at the center of cannabis counterculture since 1974 and boasts original contributions from the likes of Truman Capote, Charles Bukowski and Hunter S. Thompson—was more than happy to help.

“Traditionally, cannabis was dissolved into a type of fat, like butter or oil,” explains McDonough, the author of “The Official High Times Cannabis Cookbook” and a longtime edibles judge at the High Times Cannabis Cup, the world’s leading marijuana trade show. “After simmering the plant matter or hash in butter or oil, you strain the plant matter away and use the infusion in a recipe. In recipes like bhang—a centuries-old medicine in Indian culture—they found that marijuana’s psychoactive ingredients are better absorbed when combined with fat. You could eat a big bag of dried cannabis, but your body wouldn’t be able to absorb it as effectively.”

This process of breaking down weed into a more easily absorbed substance also explains why baking with marijuana is so popular—if you’re using butter anyway, why not infuse it with cannabis and get a little more bhang for your buck? (I promise, I’ll stop.) But McDonough says there’s another reason that baked goods are so associated with edibles culture.

“Baking with cannabis became part of popular culture in the 1950s with the publication of the Alice B. Toklas cookbook,” McDonough explains. The book, published in 1954 and one of the bestselling cookbooks of all time, included a recipe for hashish fudge that became the book’s most famous edible entry. (Toklas’ pot brownies have made innumerable appearances in pop culture, perhaps most unforgettably in the 1968 Peter Sellers movie “I Love You, Alice B. Toklas,” in which they play a pivotal role.) But Toklas’ unique recipes didn’t just capture the public’s imagination—they inspired a whole new level of cannabis creativity.

“Brownies are classic,” says Bevin Bell-Hall, who co-directed the documentary film “La Vie en Verte: The WAMM Movie” about the Wo/men’s Alliance for Medical Marijuana, the nation’s oldest continuously operating medical cannabis collective, founded in Santa Cruz in 1993. “At WAMM, cookies and muffins are popular. Candies and honey are also popular recreationally. We have a friend in Sacramento who has a home bakery who makes all sorts of pastries and bread products. And because of its medicinal purposes, we’ve seen a lot of gluten-free, allergen-free and vegan options on the dispensary and independent markets.”

“There’s been a real expansion in the food you can medicate these days. We’re not just making pot brownies and Rice Krispies Treats anymore,” adds McDonough, who has evaluated more than 500 edibles products over the past five years. “Now, we’re seeing more health products that contain cannabis, including sauces, condiments and spreads. It’s easy to measure a dose by teaspoon or tablespoon, and it gives great flexibility for menu planning.”

In 1996, California voters passed Proposition 215, making our state the first in the union to allow the medical use of marijuana. In response, the Institute of Medicine issued a report that examined potential therapeutic uses for marijuana, finding that “scientific data indicate the potential therapeutic value of cannabinoid drugs, primarily THC (marijuana’s main psychoactive ingredient), for pain relief, control of nausea and vomiting and appetite stimulation.”

At the federal level, marijuana is still classified as a Schedule I substance—considered to have a high potential for dependency and no accepted medical use—under the Controlled Substances Act, making distribution of marijuana a federal offense, so medical marijuana prescriptions obtained from participating doctors are more often called “recommendations” or “referrals” instead of prescriptions.

With the passage of Prop 64 this past fall, people in California who don’t already possess a doctor’s recommendation for the use of medical marijuana can legally grow and consume it for personal use. McDonough doesn’t foresee a huge uptick in usage.

“Because medical use is so liberal here, people are already used to it,” McDonough says. “Maybe there will be a bit more experimentation, but there will be less of a learning curve. It’s been relatively easy to obtain a recommendation from a doctor for medical use, so if you’ve wanted to try it, you’ve probably already done so.”

It’s actually the combination of the drug’s efficacy and popularity as a medical substance that’s led to the development of so many delectable edible recipes over the past several decades. At WAMM, which offers organic medical marijuana to patients for the treatment of terminal and chronic illnesses, Bell-Hall has seen firsthand that ingesting cannabis through edibles instead of smoking can have great benefits.

“When you eat edibles, you digest the marijuana and it has a more delayed and prolonged effect, as opposed to tinctures (cannabis distilled with alcohol) that go into the bloodstream or smoking, which moves THC quickly to the brain,” Bell-Hall explains.

“Edibles are stronger,” McDonough confirms. “With smoking, the effects will wear off in an hour or two, so it won’t provide the same body-pain relief that edibles do. When cannabis is ingested, it takes an hour and a half to two hours to work through the digestive tract and get processed by the liver, so the effect can last four to six hours.”

This prolonged relief means that patients who would otherwise be taking high doses of pharmaceutical drugs like ibuprofen or opioids (also called narcotics) like oxycodone for pain management can instead remain comfortable without putting themselves in danger of drug dependence. McDonough says that edible cannabis is even being used to help break the vicious cycle of heroin usage and other forms of opioid addiction, of which the country is experiencing an enormous epidemic.

So what do edibles of the future look like?

“A lot of it now is about novelty and trying something that’s new,” says McDonough, who’s become quite an expert since starting in the art department at High Times in 2002 and working her way up to edibles editor—the first job title of its kind, as far as she can tell. “There’s a fun factor of ‘Look what they put pot in now!’ Everything you can imagine can be infused with pot. We’re seeing drinks becoming a lot more popular because it doesn’t take long to get the effect. When it’s absorbed through the mouth, either in beverage form or through lozenges, it’s more fast-acting. But the biggest allure is that you can be very discreet. You won’t smell like smoke.”

“One of the wonderful things about the plant is that there are numerous ways to utilize it medicinally, including absorption through the skin,” Bell-Hall says. “We see people using ointments and balms to great success for pain and skin conditions. Oils and concentrates are being used often today, as are drops under the tongue and in (vaporizer) pens.”

McDonough says that extracts—or oils made from distilled, concentrated cannabis—are becoming more popular with edibles manufacturers because they’re easier to dose correctly. (The dosage question came to a head in 2015 when Colorado put regulations into effect that forced infused edibles to comply with new packaging, labeling and potency restrictions that define one dose as 10 or fewer milligrams of activated THC. California is expected to follow suit.) McDonough says there’s even an underground movement in Spain and Israel to use superconcentrated cannabis oil to not only treat symptoms of cancer and other neurodegenerative diseases but also to attack the diseases themselves.

It will likely take years for those studies to make their way to our shores. In the meantime, there are brownies, cookies, crackers, candies, tinctures, lozenges, drinks and sauces galore to help you live the high life just like Alice B. Toklas.