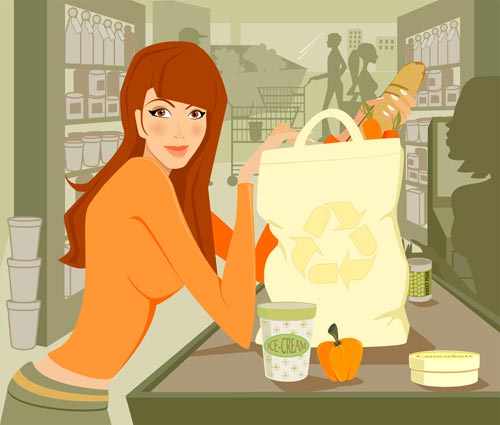 Of all my attempts at weight loss throughout my 40-odd years, the award for Most Futile goes to the time I signed up for NutriSystem, only to adjourn after the requisite weigh-in every week to the ice cream shop next door. I lasted less than a month on the diet and came out 10 pounds ahead.

Fast-forward to a year or so ago. I devoted an uncharacteristically rigorous six months to training for a half marathon, limped across the finish line with a set of gruesome blisters, then spent the next week at home, nursing my physical and psychic wounds with a Costco-size case of Pop-Tarts.

So when my editor asked me to go on a low-carbon diet and chronicle the experience for Sacramento magazine, a red flag went up. To clarify: I was being asked to cut down on the amount of climate-foiling carbon dioxide I help generate, not to reduce my intake of carbs. Whew.

Still, self-discipline has never been a big part of my DNA when it comes to any type of regimen. And other than the blue bin, dutifully filled with recyclables and rolled out to the curb every week, my environmental rsum has been pretty lean up to this point.

I figured, however, that two months on a lean, green diet was something even I could hack. I was intrigued by the buzz over Al Gore’s Academy Award-winning documentary, An Inconvenient Truth, and knew this would finally motivate me to rent the DVD.

I was also curious to learn how my own family of three stacked up against the rest of the country in terms of carbon dioxide emissions, which are produced by the burning of gas, oil and other fossil fuels and are believed to be one of the chief culprits in global warming. At the rate we’re going, many scientists believe, we face increasingly catastrophic climate changes in the years ahead. Droughts. Floods. Loss of species. Pretty compelling stuff. So, with my attention snared, I was off and running.

Thanks to the Internet, I didn’t have to look far for a tool to calculate my individual and my household’s CO2 outputs. At one website, I learned that I am singularly responsible for emitting 7.2 tons of carbon dioxide each year, based on the car I drive (a 20-mpg Honda CR-V), my mileage and the type of energy I use at home (mainly electric, with some gas).

That’s slightly below the national average of 7.5 tons per individual and far less than the household figures tracked by most scientists. David Gershon, author of Low Carbon Diet: A 30 Day Program to Lose 5000 Pounds (Empowerment Institute, $12.95), estimates that the typical American household generates 55,000 pounds (27.5 tons) of carbon dioxide a year.

I bought the Gershon book early on, while trolling Amazon.com, and it proved a godsend: easy to read and rife with practical tips for reducing one’s carbon footprint. Gershon’s suggestions range from modest&emdash;toting canvas sacks to the supermarket instead of using paper or plastic grocery bags&emdash;to major, like purchasing a fuel-efficient vehicle or an air conditioner that meets strict energy-efficiency guidelines.
Per his suggestion, I dutifully wrote to the Direct Marketing Association to cut the amount of junk mail we get every week. (We averaged about eight pieces a day, if you include the ubiquitous Pottery Barn and Oriental Trading Company catalogs.) The number has dropped slightly in recent weeks&emdash;a microscopic step, to be sure, but action nonetheless.

We are also slowly replacing all 31 of our incandescent light bulbs with the fuel-efficient compact fluorescent variety. I’m not sure if it’s nostalgia or aesthetics, but something is keeping me from fully embracing the curlicued bulbs. Maybe I’d better get over that: According to the Environmental Protection Agency, replacing five standard light bulbs in every American household with compact fluorescents would prevent greenhouse gases equivalent to taking 8 million cars off the road.

In truth, we were already doing a few things right chez Ferris Heenan. We go light on the a/c in the summertime, preferring to use ceiling fans or a quick dip in the pool to cool down. In the winter, we keep the thermostat so low that we have noticed a drop in repeat houseguests. (Hey! A side benefit!)

How low do we go? When I was pregnant, I was convinced that our baby would come out with a coating of fur as a means of adapting to our 60-degree indoor climes. My fears went unrealized, and Fiona, now 7, has learned to bundle up every December just like the rest of us.

Just think: By setting your winter thermostat to 65 degrees when at home during the day&emdash;and lowering it to 55 at night&emdash;you, too, could lose 1,400 pounds of carbon dioxide a year!

Hot-water usage is another tangible. According to Gershon, a 10-minute shower or a single hot bath can generate up to four pounds of CO2. Cutting the time in half, or going low-flow, uses less energy. (See how logical this stuff is?) The result is a wash in our household. One of the adults has mastered the art of the super-speedy shower (and really does get clean); the other has a ways to go.

Dishwashing is not as cut and dried, and I have put way too much thought into this since my low-carbon experiment began. A dishwasher can produce about two pounds of carbon dioxide per load. But washing by hand produces even more, if done recklessly.

The trick is to fill the sink just once to rinse instead of letting the water flow. I have European friends who don’t bother rinsing the soap off at all and still thrive. Laudable, no doubt, but not something I am ready to do just yet.

One last major energy-consuming activity to discuss inside the home: laundry. In recent months, I’ve made the switch to cold-water wash, shaving a reported two pounds of CO2 from our household diet with every load. Grand savings for the year: 728 pounds, and our clothes seem as clean as ever.

Then there’s the road, where our family’s track record is mixed. I drove a fuel-efficient Subaru for a dozen years, averaging 28 miles per gallon. I retired my beloved ‘baru in 2005 when the frequency of repairs ramped up, opting for a mini-SUV instead of another wagon.

My husband, Michael, bought a Honda Pilot SUV that same year. Our foresight was questionable; the price of gas was already shooting skyward. We got our comeuppance when it topped $3 a gallon not long ago.

I’ll go for better fuel efficiency the next time around. In the meantime, I am altering my daily habits to lessen the impact of needless gas consumption&emdash;and I credit this low-carbon trial run for a bit of consciousness-raising.

It’s a four-mile drive from home to Fiona’s school, most of that in start-and-stop traffic. That comes to 16 miles (nearly a gallon of gas and a pound of CO2) between daily drop-off and pickup. Add the back-and-forth for soccer practice, library and chess club aide, Girl Scouts, play dates and assorted parent meetings, and the number of miles logged up and down Arden Way every week is astounding.

Moving closer to her school is not an option, but consolidating my trips to and fro has proven not so painful. A new Starbucks recently opened across the street from the campus, so I now have an adjunct office to do my work instead of racing home to grab an hour or two of computer time.

I even stocked up on reusable thermal bags so I can wedge my grocery shopping into the blocks of time I previously spent on the road. My bank, pharmacy and gas station are all on my daily flight path. The dry cleaner is further afield but is en route to Fiona’s weekly dance class and has become a fixed part of the itinerary.

You get the idea. It’s not ideal&emdash;often inconvenient, in fact&emdash;but neither is pumping all of that unnecessary carbon dioxide into the atmosphere.

There is still much to do, so many modifications to cut out those 5,000 pounds Gershon promises. Just a few from my list:
â€¢ Buy only locally grown produce. (Think of the noxious CO2 generated by transporting grapes and berries from out of state, let alone across international borders.)

â€¢ Reduce the amount of meat we eat. A tough sell for my beef-crazy family, but scientists believe raising livestock and bringing it to market dumps more harmful greenhouse gases into the atmosphere than all the gas-guzzling cars we drive.

â€¢ Invest in an Energy Star air conditioner (or at least clean out the filters on the unit we have).

â€¢ Remind my legislators through letters and my own votes that we should care about climate change and be adopting stricter policies to prevent it.

Al Gore speaks of our moral imperative to make big changes. Now I understand why, appreciate the urgency of when and am closing in on how.

So how did I do on my low-carbon diet? If I stick with all the changes I made, I will shed about 8,200 pounds of carbon dioxide from my personal and household energy consumption for the year.

That doesn’t exactly make me climate-change poster girl material, but it is worthy of an ice cream nevertheless.

>> Going on a low-carbon diet of your own? Curious about measuring your carbon footprint? Here’s a handful of websites to get you started: