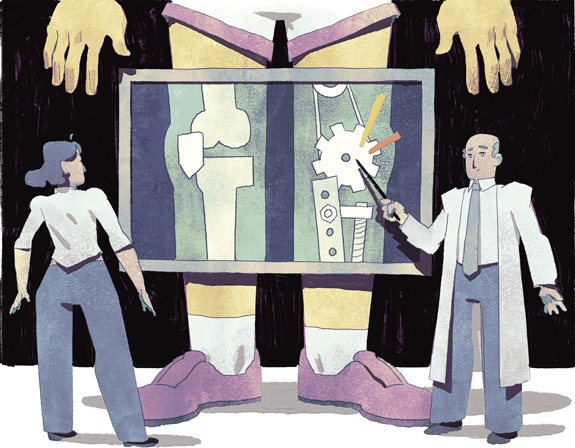 We all know someone who has had one: a hip replacement, a knee replacement, a shoulder replacement or some other joint replacement. But what necessitates the need for one? Overuse? Bad luck in the gene department? And what exactly does a joint replacement do? How long will you be off work—or away from the golf course? We asked these questions and more to local experts. Read on.

WHAT IS A JOINT REPLACEMENT—IN LAYMAN’S TERMS, PLEASE:“A joint replacement changes the joint either by replacing the joint or resurfacing the joint,” says Mauro Giordani, M.D., a clinical professor of orthopedic surgery at UC Davis and chief and fellowship director of the Total Joint Service program at UC Davis. “Historically, when doctors figured out that joints were wearing out, they tried to put something in between the joints—such as fascia or skin—to keep the joints from rubbing against each other, and it would keep them from hurting. The idea is if you don’t allow innate—nonalive—material to rub together, it will alleviate the pain.” These days, a damaged or arthritic joint is swapped out for a metal, plastic or ceramic prosthesis, which is designed to mimic the movement of a normal, healthy joint, according to the American Academy of Orthopaedic Surgeons. The most common joints replaced are knees and hips, but other joints include shoulders, ankles, fingers and elbows.

WHY DO PEOPLE HAVE ONE DONE?“The primary purpose of a joint replacement is pain reduction,” says Donna Just, P.T., a physical therapist with Sutter Care at Home, Roseville. “When the pain is interfering with your lifestyle, that is when people get joint replacement surgery.” Disability is another reason. Adds Giordani, “They might be afraid to go on vacation because they cannot walk more than a mile, or they cannot go to the grocery store without holding onto the cart, or they may have trouble putting on their shoes.” However, pain reduction and return to function should be the main reasons people have joint replacements, not so they can get back on the basketball court, says Giordani.

DID I DO SOMETHING TO CAUSE THIS? Not necessarily, say the experts. “For some people, it’s genetic predisposition,” says Just. “Sometimes it is a condition called avascular necrosis, where the blood supply to the ball part of the joint is diminished and then the bone deteriorates because of lack of blood supply,” she explains. Osteoarthritis, which is normal degeneration of the body, can also lead to worn-out joints. “Some people’s bodies wear and tear faster than others,” says Giordani. And autoimmune diseases including rheumatoid arthritis, which affects joints on both sides of the body, and psoriatic arthritis may lead to the need for joint replacement surgery.

SOMETIMES YOU DO PLAY A FACTOR: Previous injuries and fractures that never healed properly can lead to the need for a joint replacement, says Just. Simply overusing a joint—maybe through weightlifting or aggressive, high-impact exercise—wears it down, she adds. Leading too sedentary a lifestyle and being overweight could lead to the degeneration of joints. “If you are 20 pounds overweight, you are carrying 60 pounds of extra force on your knees,” says Giordani. “Each extra pound adds three times the force across the knees.”

SO JOINT REPLACEMENTS ARE NOT JUST FOR OLDER PEOPLE? Nope. In days past, joint replacements were reserved for the older-than-60 crowd. Why? You did not want people outliving the lifetime of the replacement. But nowadays, well, let’s just say . . .

JOINT REPLACEMENTS HAVE COME A LONG WAY, BABY: “Because the implants are getting better and better, people are getting younger and younger,” says Robert Jamieson, D.O., a Sutter Health orthopedic surgeon with offices in Folsom and Roseville. “We have better techniques to help tissue, and the implants have improved as well. The implants are lasting longer.” Still, the younger you are when you have the replacement, the higher the likelihood that you will need a revision surgery in the future. That being said, with advances in orthopedic implants, there is greater longevity being found.

IT’S A HEALTHY PERSON’S SURGERY: Smokers, people with diabetes, high blood pressure or poor lung health as well as those who are overweight may not be good candidates for surgery and, in fact, might not be cleared for surgery.

IS OUTPATIENT SURGERY AN OPTION? Jamieson started offering outpatient surgery about 2.5 years ago and says patients have responded favorably. “They are able to go home and sleep in their own bed,” he says. How does he do this? By offering a multimodal approach to pain management, utilizing injections during surgery and non-narcotic medication before, during and after surgery. “I utilize narcotics when needed, but one of the goals I have is to do these total joint replacements and not have to use heavy narcotics . . . so that we can decrease the risk of addiction and complications.” Still, he cautions, it’s a discussion to have with your surgeon. “Different surgeons take different approaches and do different things, but all can have a good outcome,” he says.

AM I GOING TO HURT LIKE %#%? “The first two to three weeks are the most challenging,” says Just. After that, most people are able to cut back or stop their meds. “They have a new joint, so there is no more bone on bone [rubbing], and they are getting over their surgical pain,” she says.

PLAN ON AN ACTIVE RECOVERY: Movement is the name of the game when healing from joint replacement surgery. “Depending on the time of the surgery, the person may be getting up the same day as surgery for physical therapy,” says Just. “If not, the next day.” You may have a home health nurse and physical therapist come in a few times a week for the first three weeks or so, but you’ll be prescribed exercises to do on your own. “You’ve got to be willing to put forth some effort in your rehab so that you have a good outcome,” says Just. “Patients have homework to do.”

HOW LONG DOES IT TAKE TO RECOVER? Experts concur that average recovery time is about six to 12 weeks, but you’ll notice huge strides in independence after about three weeks when your meds are reduced (if you take them) and the home health nurse and at-home physical therapist visits have ceased (if you had them). “You’re not fully done after that point, but you become more independent,” says Just.

“You might be driving again. You may be able to work from home.” As for mobility, if you have a hip or knee replacement, you may need help walking or use a walker, but after about three weeks you graduate to a cane or crutches, though Just cautions against crutches for older patients. “Crutches require more balance, so they are a younger person’s device,” she says. And some lucky folks, says Just, “go from a walker to nothing at all.”

While most people are probably doing day-to-day activities after about six weeks, it can be up to a year before you are fully recovered. Don’t fret; you’ll be back in the office in about six to 12 weeks, and Jamieson says you’ll be back on the golf course (and doing similar activities) after about three to six months.

IT’S NOT NECESSARILY DOUBLE THE PLEASURE: Except in certain cases such as with rheumatoid arthritis, just because you had one side replaced does not mean you will need the other side replaced, experts say.

CAN I RESUME WORKING OUT AFTER A JOINT REPLACEMENT? Yes, but be smart. Walking, cycling and swimming get the thumbs up from experts, though activities such as downhill skiing, tennis and running tend to be frowned upon.

DON’T LIKE BEING IN THE DARK? TAKE A PRE-SURGERY CLASS: Most local health systems offer joint replacement classes where patients can learn what to expect before and after surgery, how to prepare for surgery (including pre-home care), the role of exercise and physical therapy, pain management and more. Classes usually last 1.5 to two hours.

SURGERY MAY NOT BE NECESSARY: “Surgery should only be thought of after all conservative treatment options have been exhausted, including medications, injections, physical therapy, Pilates, etc.,” says Giordani.

YOU ARE NEVER TOO OLD TO GET A NEW JOINT: “If your heart and lungs are strong enough to warrant the surgery and you get clearance from your physician, you can have the surgery,” says Just. She knows. She had one patient who was in her early 90s when she got a total knee replacement. “She got a new knee. She was not going to go down with a painful knee,” says Just.