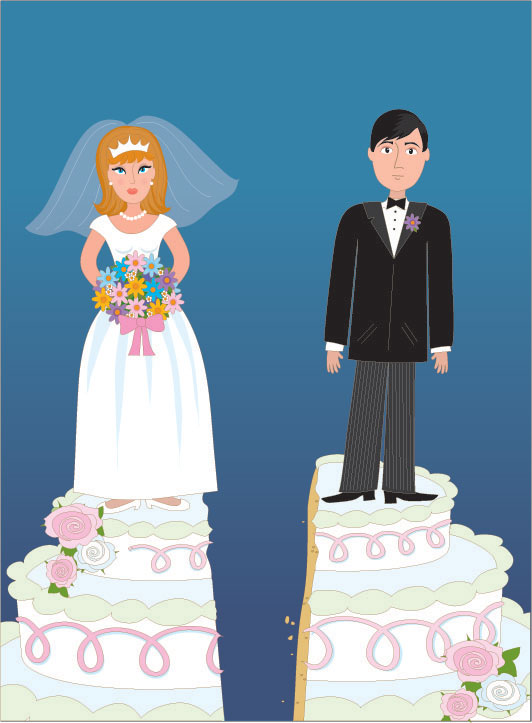 Breaking up is hard to do. But it doesn’t have to be war. In fact, if you play your cards right, it can be a downright positive experience. Here’s how.

The first few months after her husband left her were a struggle, says Sacramento tax analyst Tomi Tuel. She suffered panic attacks, woke up every morning exhausted and depressed, and watched her weight drop to 100 pounds. She was hard-pressed to pay the mortgage, and she had two young children to care for.

In California, where the divorce rate hovers near 50 percent, Tuel’s situation was unexceptional. As she says now, with a decade as a self-proclaimed divorce warrior behind her, People go through this every day and are walking around with this stuff on their shoulders right under our noses.

But Tuel’s rebound is definitely one for the record books. She is happily remarried, has crossed paths with her ex at the gym (and civilly so) and is making a name for herself on the self-help circuit with 101 Things I Learned After My Divorce (StarJunction Books, 2007), a handbook laced with wisdom and humor.

You can have an ideal divorce, Tuel writes, so long as you and your ex are flexible with one another, supportive of the children and able to get along with each other’s new romantic partners. Here are other tips, culled from area professionals and survivors,
on how to make the best of things.

Don’t fight over pots and pans, advises Sacramento family law attorney Stephanie Williams of Hiroshima, Jacobs, Roth & Lewis. And don’t bother getting an appraisal for the lawn mower, she says, using a real and recent example from a
fellow divorce attorney.

Fighting over those issues is gut-wrenching, says Williams. You’re paying an attorney and it’s expensive. But it’s hard for [clients] to get that initially, especially if it’s a case involving infidelity.

Be flexible over the immaterial, too, where possible. If a parent wants to pick up the child after school for a visit instead of waiting until after dinner, give up those extra hours, Williams suggests.

Just stop the fight. Life is too short, agrees Tim Rood, a licensed marriage and family therapist who has offices in Fair Oaks and Placerville. Stop the fighting and move on for everybody’s sake.

There’s the high-conflict approach. Then there’s collaboration, a relative newcomer to family law and a close cousin to mediation. The process involves a dispute-resolution team of legal, financial and mental-health professionals who place the couple’s mutual respect at the forefront and don’t consider court an option, explains Hal Bartholomew, a Sacramento attorney and current president of Collaborative Practice California, a statewide network.

Once a couple decides to divorce, the route they choose to do so is their most important decision, Bartholomew believes. I tell them that this will determine your expenses, your future relationship, all of those things, he says, adding, It’s clearly better than the litigation model and is based on the concept that the couple is the centerpiece . . . and the attorneys are more in a support role. They’re not there making demands.

The collaborative process proved a godsend for Megan MacPherson, a Sacramento area public affairs specialist who divorced in 2006 after 14 years of marriage. It may seem
unfathomable to work with a former spouse at such an emotional time, she says, but the precedent sets the tone for the years ahead.

It’s the kind of process that keeps the best interest of the kids, says MacPherson, a former naval officer whose children were 2 and 5 at the time of the divorce. You don’t have any extra lawyers, the movie court battles, those extra layers of mean-spiritedness . . . You’re working together toward a solution instead of fighting each other.

It is a misconception that collaboration or mediation is solely for couples who can get along, says Bartholomew. We’re seeing very, very difficult cases, he says.

Like Bartholomew, Rood is an advocate for collaborative divorce. He often is brought on board to meet with the children and represent their interests during a divorce. The children are watching and hearing everything, he says. I’ve heard them talking in the process about how their hearts have been ripped out.

Divorcing parents should be aware that their words and actions can affect their children’s academic, psychological and interpersonal successes in the years ahead, Rood says. They need to know that their parents didn’t divorce them. Mommy and Daddy still love them, and Mommy and Daddy are going to co-parent them, he explains. This will help them get through this with the least amount of scars and the least amount of trauma.

That’s not to say it will be easy, especially in the early weeks and months, says Tuel, whose divorce came after seven years of marriage. When her ex would come to collect their children, she would make sure they were ready, that their bags were on the front steps and that any information she had to share with their father was written down ahead of time and pinned to their backpacks.

When he comes, open the door, send them out and go to the back of the house so there’s no potential for raised voices or conflict, Tuel advises. It’s OK to hide behind e-mail and voice mail, she says, though neither was as common when she divorced 10 years ago.

That’s always easier said than done, says Jeff Barker, owner of Rhino Sports in El Dorado Hills. When his marriage ended about four years ago, his wife spurned his attempts at mediation.

It takes two people to be nice. And if one of them is not nice, you’re just counting the days and dollars to get through it, says Barker, who was married for 3 1/2 years.

Barker says he feels fortunate that the couple did not have children together. Parents have to be doubly vigilant when it comes to bad-mouthing. Never put the other parent down, MacPherson says. That can be hard when you’re frustrated. But your child knows they’re part of the other parent. You don’t want them to feel that they’re being rejected.

It might be tempting to squirrel away some assets, but don’t tempt karma.  Meet jointly with a certified divorce financial analyst instead to get a proper accounting of your fiscal worth.

Not every asset is the same, says Steven Rutlen, a CPA who works with couples going through collaborative divorce. For instance, a $10,000 bank account and the same sum in IBM stock may differ in value if capital gains figure in. Retirement plans are not synonymous with pension plans. And buying out a spouse’s share of the mortgage so the other can stay in the home can make for an unequal trade down the road, he explains.

Part of Rutlen’s job is to make sure both people understand their holdings before divvying them up. In the marriage, one of the parties has usually been the financial manager, he says. When that decision is made to divorce, the person who hasn’t been involved in the finances feels very vulnerable.

No questions should go unasked. Rutlen’s own divorce was in the adversarial model, he says. His mission is to prevent that for others. Stay in control of the process, he says. So frequently, [people] relinquish control to their attorneys or other parties. Don’t get sucked in the black vortex of divorce.

6. Look At Divorce As a Beginning, Not An End

Williams, the attorney, likens divorce to the death of a loved one, but with a sizable dose of bitterness mixed in with the loss. She often advises clients to seek individual counseling to get through the tough parts. Several Sacramento area churches offer divorce recovery groups as well.

Tuel remembers working her way through the stages of grieving, bouncing from denial to depression, with frequent U-turns back to anger. Her weight dropped from 112 to 100 pounds. She finally looked at herself in the mirror and decided she was ready to climb out. Unfortunately, it’s just one of those things where time just has to heal, she says.

Leaning on friends and family helped. In the beginning, one of Tuel’s sisters helped pay the bills and watched her young children so Tuel could grab some alone time at a nearby Starbucks.

MacPherson has had similar support. It’s hard to ask, but you do need help. And people really step up, she says.

For MacPherson, who married at the age of 21, that meant everything from a new home and wardrobe to a new and full-time job. She only recently has begun to date. Above all, she has had the chance since her divorce to take inventory of how she wants to lead the next chapter of her life.

You get to start all over, she says. You can look at it as a setback or as a springboard. For me, this is definitely a springboard.