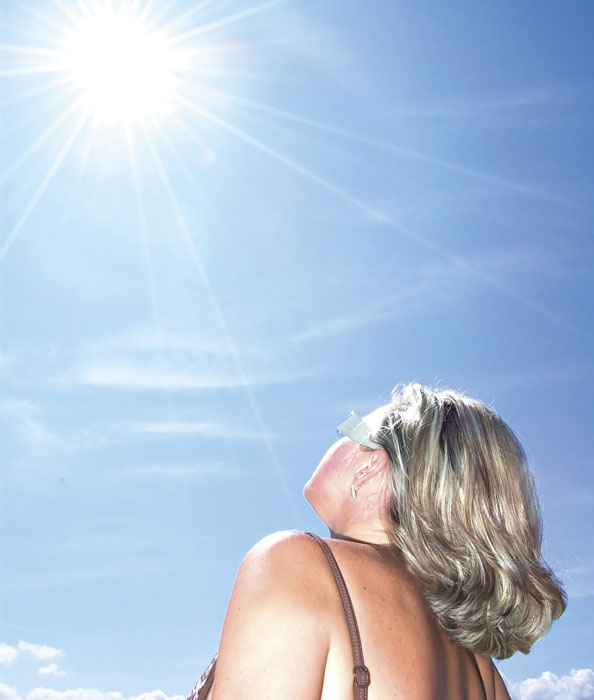 Vitamin D is finally having its day in the sun, as well it should: It’s the “sunshine” vitamin, synthesized in our skin from ultraviolet rays. With a sea of new studies suggesting it may help to ward off everything from the common cold to cancer, we wondered: Is this for real? And what else should we know about this vitamin du jour?
For a little illumination, we turned to a few local experts. Here’s what they had to say.

The jury’s still out on almost everything
We’ve known for years that vitamin D, along with calcium, aids bone growth and maintenance—that’s why we were goaded to guzzle gallons of D-fortified milk as kids (and why, as adults, the pro-D focus shifts to preventing osteoporosis). But is it really the all-purpose miracle worker recent headlines suggest? “There are trends, there are links, but nothing has been completely proven,” says Margaret Scheller, a registered dietitian at Sutter Roseville. “We need more well-designed studies.” Still, we do know that vitamin D plays a role in regulating neuromuscular and immune functions. It also reduces inflammation, which points to all kinds of promising possibilities and explains the preponderance of studies linking D deficiency to everything from heart disease, autoimmune diseases (such as multiple sclerosis), colds and flus, and chronic respiratory disorders such as asthma and emphysema. Possibly the most intriguing new theory is that vitamin D may help to regulate cell growth and reduce the risk of certain cancers, including breast, colon and lung. But as Scheller reminds us, the jury’s still out. “It would be nice if these things were black and white,” she says. “But they’re usually not.” Still, even if vitamin D does half as much good as studies suggest, it seems worth giving it try. But be sure not to overdo it: Toxicity, while rare, can be an issue. (D is fat-soluble, meaning we store it in our bodies.)

It may keep you steady on your feet
Want to lower your chances of broken bones? Staying off skateboards helps—and so, apparently, does vitamin D. “Vitamin D helps with strength and balance, so people who get enough in their diet tend to fall less, leading to fewer fractures,” explains Michael Okimura, M.D., an endocrinologist and director of bone density services at Kaiser Permanente Sacramento and Roseville. This fracture business is especially significant as people push past 50 and become more vulnerable to low bone mass and osteoporosis. And speaking of the big “O,” Okimura finds that up to 40 percent of his patients with the brittle bone disease are low in vitamin D, reminding us to get our D before the disease gets us: Used preventively, the vitamin may help us avoid osteoporosis. But is it also a helpful treatment tool? That, says Okimura, is the question.

Deficiency is common—even in sunny Sacramento
As its nickname implies, the simplest route to the sunshine vitamin is to soak up the sun. But you can already see the pitfalls here: a) We have seasons—even in Sacramento; b) Smart cookies who want to avoid skin cancer don’t bake in the sun; and c) Smart cookies also use high SPF sunscreen, which blocks the vitamin’s production. “The same UVB rays that we’re always trying to block with sunscreen are the best source of vitamin D,” says Sutter’s Scheller. She worries especially about older patients, who often don’t get out of doors much. “I can walk into a patient’s room and see they’ve not been outside for decades,” she says. “They have kind of a pasty look.” While it doesn’t take much sunshine to get the D we need—about 10 to 15 minutes of unprotected exposure, two to three times a week, should do the trick—not everyone’s skin can handle the sun, prompting Scheller to dish out the classic advice: Ask your doctor. If you can’t take the heat, get out of the sun and into the kitchen to acquire your D through food and supplements (but not necessarily in that order).

Supplements rule
There aren’t many rich food sources of vitamin D, so experts agree supplementation is your best bet. Things like salmon and mackerel and sardines can help. But unless you drink two 8-ounce glasses of fortified milk a day, or—hold your noses, everybody—swill a daily cocktail of cod liver oil, it’s unlikely you’re even getting the meager 200 IU  (international units) currently recommended as an adequate daily intake for people 50 and younger by the National Institutes of Health’s Office of Dietary Supplements. (That number is considered a joke by most experts, by the way; see No. 7.) Bottom line: A supplement is the most surefire way to go, but make sure it’s D3 (cholecalciferol), cautions Scheller, as it’s the most effective form of vitamin D. “The labels are so small, you really have to get out your Dr. Dean Edells (glasses) to see that little subscript of ‘3’,” she laughs. Your regular multivitamin might contain all you need, too, so check that bottle first.

Kids need D, too
Last year, the American Academy of Pediatrics doubled the recommended dosage of D from 200 to 400 IU for infants, children and adolescents. The reason? Studies show that 400 units of D can both prevent and treat rickets, a childhood bone-softening disease that most people assume went the way of the Model T Ford. But even though the development of fortified milk in the ’30s put the whammy on the then-epidemic, rickets still occurs—even in our own backyard, says Charles Stephensen, a research scientist with the U.S. Department of Agriculture’s Western Human Nutrition Research Center at UC Davis. (He’s also a nutrition professor.) “There are still a few cases of infants being diagnosed with rickets in the Sacramento area,” he says. “If you have babies at home, ask your pediatrician about vitamin drops.”

Exposure matters
In the endless dispute over just how much D we need, experts bat around numbers. But Stephensen, who is conducting ongoing research on vitamin D at UC Davis, suggests it’s not a one-size-fits-all proposition. In a recent study in which he and his team followed 72 subjects through four seasons, the findings were clear: The most important factor in vitamin D status was sun exposure, followed closely by skin pigmentation and diet. “People who often spend long periods of time outside, such as bicyclists and triathletes, tested with the highest levels of vitamin D, especially those with light [northern European] skin,” reports Stephensen. Conversely, the lowest vitamin D levels were found in those with low sun exposure (less than 10 to 15 minutes a day) and darker skin, such as African Americans and Pakistanis. (Dark skin synthesizes less vitamin D than lighter skin.) His conclusion: If you’re in the latter category, you may need significantly more vitamin D than the amount currently recommended—“something more like 1,000 IU, depending.”

More is likely better
Health guru Andrew Weil, M.D., has been condoning 1,000 IU of D per day for years, and as evidence of the vitamin’s multiple health benefits mounts, more and more experts are jumping on the bandwagon—sometimes touting even higher numbers. One of them is Kaiser’s Okimura, who says he thinks it’s reasonable that people take 1,000 IU “in addition to whatever else they’re taking—drinking milk, multivitamins. I’ve been generally recommending that people think about 2,000 on a daily basis.” Soon, those numbers may be the standard, says Stephensen, noting that a National Academy of Sciences review is under way and new recommendations are soon expected.

It’s affordable
In these belt-tightening times, you might think  supplements would be the first to be crossed off the shopping list. But as Kaiser’s Okimura points out, vitamin D pills are “pretty cheap—about $6 or $7 for an 100-day supply.” For an even better bargain, go and catch some rays: Sunshine is still free.

The Numbers Game
The numbers are soon expected to rise. But these are the current recommended adequate intakes for vitamin D established by the National Institutes of Health’s Office of Dietary Supplements:

Most experts consider these numbers too low, including the American Academy of Pediatrics, which recommends 400 IU daily for infants, children and adolescents. The National Osteoporosis Foundation also sets the bar higher, suggesting 400 to 800 IU for adults younger than age 50 and 800 to 1,000 IU for those 50 and older.

• D may boost the brain as well as body: Deficiencies have been linked with mental illness and mood disorders, including depression.

• Vitamin D actually is not a vitamin at all, but a hormone.