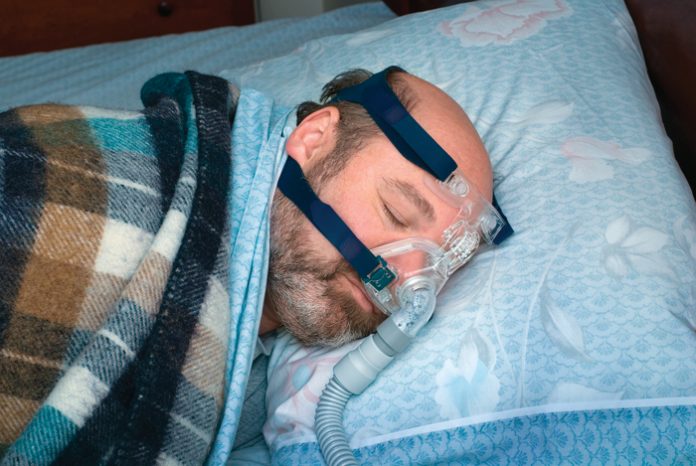 Carol Rivero tried to get used to the CPAP machine. But like many sleep apnea patients, she had just one problem: the mask.
“I would take it off in the night and just sit there, wide awake and bug-eyed,” remembers the 55-year-old Rivero, who was prescribed continuous positive airway pressure, or CPAP, after being diagnosed with obstructive sleep apnea, a disorder that causes breathing to stop when the tissue in the back of the throat collapses, sometimes hundreds of times a night. Rivero wasn’t bothered by the white noise of the machine, which blows air into the blocked airway, restoring normal breathing. But the full-face mask? She just couldn’t go there.
Rivero isn’t alone. While CPAP machines are considered the gold standard of sleep apnea treatment, they won’t work if people don’t use them—and many don’t, with compliance rates generally cited around 50 percent. With some 12 to 18 million Americans affected by the disorder, it’s a little scary to think how many of them have CPAP machines sitting at home unplugged, especially since sleep apnea can be life threatening. Untreated apnea is linked to high blood pressure and heart disease, and the fatigue factor also is a potential killer. Doctors worry especially about their sleepy-headed patients getting behind the wheel of a car.
Thankfully, Rivero was alert as she was driving along 29th Street in midtown one day and heard a radio ad for a different kind of apnea treatment: a dental mouthpiece. She was so excited, she pulled off the road, jotted down the information and called her doctor.
It was a moment that “completely and totally altered my life,” says Rivero, who has been using the mouthpiece for nearly two years.
“I used to spend a good part of my day figuring out when I could nap,” says the Sacramento psychologist. “But I don’t need naps anymore.”

The Mouthpiece Man
Tim Mickiewicz, D.D.S., is Rivero’s dentist and an unabashed enthusiast of oral appliance therapy. (He even uses a mouthpiece himself.) There are a multitude of models, many of them FDA-approved, on the market. Most of them operate on the same principle, says Mickiewicz: They bring the jaw forward, reposition the tongue and lift the soft palate, which keeps the airway open and allows for easier nasal breathing, restoring sleep and reducing snoring.
“They improve sleep, which changes lives and has saved a few marriages,” quips Mickiewicz, whose expertise in dental sleep medicine has earned him a bit of a niche as the local “mouthpiece man”: He’s contracted with CHW/Mercy, Sutter and UC Davis, meaning he co-manages patients with sleep doctors from those health care systems. (That’s how Rivero ended up in his care: She’s a UC Davis patient.) Appliances range in cost, but Mickiewicz says his run $1,200 and generally are covered by medical insurance.
Mickiewicz sees his work as “filling the void” between dentistry and medicine, stressing the importance of the two camps working closely together. While a qualified dentist can fit a mouthpiece, only doctors can provide the diagnostic sleep studies and other health care apnea patients may need. “[Apnea] tends to be a multifactorial thing,” says Mickiewicz. “People will come in and have diabetes and high blood pressure along with the apnea, and that’s the gray area between medicine and dentistry.”
Experts agree that patients with severe apnea are still best served by CPAP—if they can tolerate it. But acceptance is growing for mouthpiece therapy for less severe cases, and not just among dentists. Even the American Academy of Sleep Medicine, which sets the standards for sleep medicine, says oral appliances are indicated for patients with mild to moderate apnea who don’t do well with CPAP.
There are exceptions. Not everyone is anatomically suited for the mouthpiece, and not everyone can sleep with a “big piece of plastic” in his or her mouth. Other possible pitfalls: bite changes, minor tooth or jaw discomfort and, rarely, TMJ (temporomandibular joint disorder), making it critical for patients to get their appliances from a dentist who is qualified to treat such issues. But appliances can be adjusted and problems solved, and experts say most people tolerate the devices very well, with compliance rates typically in the 80 percent range.

The Right Diagnosis
Alan Shatzel, D.O., a neurologist, sleep specialist and Mickiewicz’s sidekick over at Mercy, is another believer in oral appliance therapy, reporting that he’s had “very few failures” with it. But he also believes the CPAP is getting a bad rap, noting that the technology is improving, with new forms of air pressure available (such as the BiPAP, a bilevel CPAP machine) and a variety of masks, such as the “nasal pillow” that some people find less claustrophobia-inducing than the full face mask.
Patients who travel frequently sometimes choose to use both, Shatzel notes.
“Some of my patients use CPAP at home and an oral appliance when they’re traveling,” he says. “It’s kind of hard to drag a machine around when you’re on the road.” Surgery to increase the size of the upper airway is another option for some, though Shatzel considers it a last resort.
First and foremost, he says, you need to know what you’re treating.
“I’m always big on making sure people have the right diagnosis and are being treated for the right thing,” he says. Home tests provide only a partial picture, he says; for full evaluation, you need to stay overnight in a clinic for a sleep study, or polysomnogram, which measures brain waves, heartbeat, breathing, and eye and leg movements. If a diagnosis of sleep apnea is confirmed, the degree of severity and type of apnea largely dictates treatment decisions. Shatzel says, “If you have central apnea [in which the brain fails to tell muscles to breathe] and use an oral appliance, it’s not the right thing.”
Some patients make it clear from the get-go that they don’t want CPAP, adds Shawn Aghili, M.D., a pulmonary and sleep medicine specialist who works with apnea patients at Sutter Roseville’s Sleep Disorders Center.
“About 10 percent come out and say, ‘If you ever show me that machine again, I’ll shoot it,’” says Aghili. Patients who want something other than CPAP may have to do their own research, he adds, “because very few doctors are aware of the treatment options for sleep apnea.”

The Best Treatment for You
Not all doctors are gung-ho about oral appliance therapy. Bill Bonekat, D.O., a professor of internal medicine who co-directs UC Davis’ sleep center, says that in his mind, CPAP is still the treatment of choice for most sleep apnea patients. Why? “Because we know it works.” While oral appliances work, too, long-term use can change the occlusion of the jaw, notes Bonekat, and that’s something patients need to consider. Still, he does recommend the appliance for patients who don’t want or can’t tolerate CPAP.
Beyond CPAP, mouthpieces and surgery, there is an even more basic step patients should take, say doctors: Lose weight. Although sleep apnea affects people of all ages and weights—even children—the typical patient is overweight, male and older than 40. The big problem lies with the neck, experts say: Weight gain causes the neck to get thicker, increasing fat in the throat and the likelihood of a blocked airway.
But weight loss is tough for many people, which is why Bonekat suggests bariatric surgery as a solution for some.
“Some of them are so overweight, and they’re not gonna lose the weight,” he says. “Losing weight will not only address the sleep apnea problem but heart problems, diabetes and other health issues.”

Is It Apnea?—If you snore, does that mean you have sleep apnea? Not necessarily: Apnea is a breathing disorder, so the real question is whether you repeatedly stop breathing during sleep. If you observe this symptom in your child or sleeping partner—or if you find yourself inexplicably tired during the day (another key symptom)—you may want to ask your doctor about the possibility of apnea. An overnight sleep study (in a clinic, not at home) is considered the best diagnostic tool.

Finding a Dentist
Looking for a qualified dentist who can fit you with an oral appliance for sleep apnea? First, ask your sleep doctor for recommendations. Another avenue: Visit the “find a dentist” feature on the American Academy of Dental Sleep Medicine’s website at aadsm.org.

Apnea Facts
• There are three types of sleep apnea: obstructive, caused by airway blockage; central, caused when the brain fails to signal muscles to breathe; and mixed, a combination of the two. Obstructive is the most common form.

• Men are more likely to suffer from sleep apnea than women.

• Lifestyle plays a part: Alcohol use, excess weight and smoking increase the risk of sleep apnea.