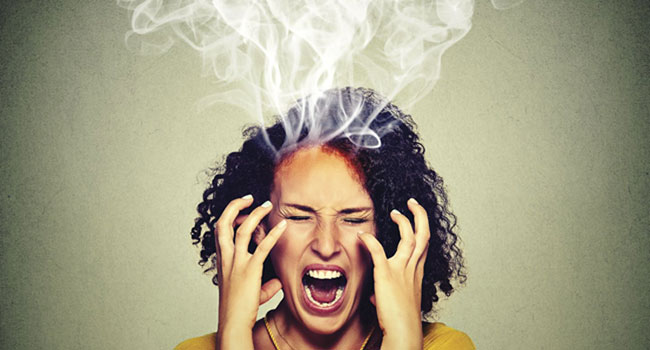 We bear witness to displays of anger in the world every day, but on June 26, 2016, it hit close to home. That’s when a Traditionalist Worker Party protest at the California State Capitol turned violent as anti-fascist groups staged a counterprotest. Several attacks, including stabbings and beatings, were captured on video and shown across social media. At this writing in early July, the United States is reeling from more violence: the fatal shootings of two African-American men—Alton Sterling in Baton Rouge, La., and Philando Castile in Falcon Heights, Minn.—by police officers, and the casualties at a peace rally in Dallas, at which 12 law enforcement officials were shot by snipers. Five died.

These tragedies, and countless others, are heartbreaking examples of anger. Many seem unavoidable in a world full of suffering. But taking a deeper look at what anger truly is, the forms it takes and how we can learn to express anger in constructive ways may be the key to creating a safer, more peaceful existence for everyone.

Anger is an emotion, not a behavior. In the same way humans feel sadness or joy, we also feel anger. And anger is not necessarily bad. “What scares people is what they do with the emotion,” says Myrna Cruz Brady, certified anger management and substance abuse counselor. She works with patients to identify patterns of thinking that come up in conjunction with anger, and the behaviors that result. “You have to change how you talk internally,” she says. Clinical psychologist Mark Ettensohn, Psy.D., agrees, saying that it’s important to reframe anger as a healthy, adaptive emotion. “Anger mobilizes us to protect things we care about,” he adds.

Seeing anger as a neutral emotion can help people who tend to suppress their angry feelings, sometimes to the point that they aren’t aware of being angry. Sacramento resident Brenda Baldwin worked with Brady to learn anger management skills after a meeting with an ex-partner’s new girlfriend led to a screaming match in front of her children. “I didn’t think it was in me,” she says of the incident two years later. “I apologized after, but I felt it wasn’t enough. I felt this can’t happen again.”

Brady uses a 12-week psychoeducational curriculum to teach patients how to manage their emotions and better awareness of triggers that can affect response, such as alcohol, drugs or medications.

The part of the brain that triggers fear is the same part that triggers anger. The amygdala is responsible for our primitive fight-or-flight response. When we encounter a frightening situation, the amygdala sounds the alarm, and our body responds in two ways: It sends adrenaline to increase blood flow and heart rate and releases testosterone to build our aggressive tendencies so we can be ready to fight. “Anger happens after we feel fear, disappointment or grief,” says Ettensohn. “It’s the body’s way of telling us to do something about [these feelings].” Furthermore, we are often unconscious of the more vulnerable feelings that came prior to feeling angry. “People don’t always realize that they are scared or disappointed,” he says. “We need to be with the first emotion, which is the most uncomfortable.”

It is how we respond to anger that can pose a problem, not anger itself. In a June 12, 2016 op-ed for The New York Times, feminist author and English professor Roxane Gay wrote, “Anger allows us to express dissatisfaction. It allows us to say something is wrong. The challenge is knowing the difference between useful anger, the kind that can stir revolutions, and the useless kind that can tear us down.”

This challenge of knowing the difference is compounded by societal, cultural and religious beliefs and practices. As a result, shame and guilt are often associated with anger. From a young age, women are taught to suppress angry feelings, and different cultures discourage outward displays of anger, whether using peaceful or violent means. Many religions teach that anger is a sin: Wrath is one of the seven deadly sins mentioned in the Bible, and the Catechism of the Catholic Church explicitly states that “anger is a desire for revenge.” Such shaming and guilt-tripping can cause damage over time, suggests Ettensohn. “We end up with places inside of ourselves where we are stuck and disconnected,” he says.

There are three ways of expressing anger: internalizing, externalizing and controlled. Internalized anger can show up as sarcasm, passive-aggressive behavior and even depression. Sometimes this internalized anger boils over and becomes destructive. Some of Brady’s patients “become doormats until they are triggered to the point that they go to an extreme,” she says. Externalized anger manifests as physical violence, verbal abuse, yelling or aggressive behavior. Controlled anger allows people to share their feelings of anger honestly and safely, without fear of rejection, which is a powerful motivator. Ettensohn encourages patients to be open, accepting and curious of their internal process. “If we are curious about our own internal world rather than reactive to it, I think that opens a lot of doors,” he says.

Anger can serve as a positive call to action. While the media may call our attention to more violent displays of anger, there are innumerable examples of how anger was used as a catalyst for change. After the mass shootings at a gay nightclub in Orlando, Fla., in late June, Rep. John Lewis of Georgia organized a sit-in on the floor of the House of Representatives to force a congressional vote on gun control measures. Baldwin’s therapy sessions with Brady inspired her to become a life coach and motivational speaker. Anyone can have issues with anger, says Baldwin. “It’s not something to feel ashamed of.” Brady notes that even the most triggering events offer an opportunity to choose differently. “Even if I’m concerned about what’s going on in the world, I can choose how to respond with my behavior,” she says.

Ettensohn works with couples to find ways of communicating angry feelings without devolving into arguments. By tapping into areas of vulnerability and sharing those feelings, we allow true connection to take place. “It helps two people to develop compassion and empathy,” he says.

Anger affects everyone. Even the most evolved, spiritually minded people feel angry at times. Brady tells her patients that forgiveness and patience are important. “Progress is the key, not perfection,” she says. Practicing self-care and seeking balance, whether that’s limiting time spent watching the news, or looking at cute animal photos when feeling overwhelmed, is imperative.

At the heart of anger management is awareness, acknowledgment and acceptance of deep inner truths. “When we are angry, we are telling ourselves a story: ‘This is what you did, this is why I am mad,’” says Ettensohn. “We need to slow down and be mindful of the story we are telling ourselves about our anger.” He uses acceptance and commitment therapy to help patients develop a mindful, nonjudgmental stance toward themselves and their feelings and to be in the present moment. Sharing one’s thoughts and feelings in open, communicative ways can lead to greater understanding–and, ultimately, peace. “The more we do that, the more we realize we’re not alone,” he says. We’re members of a much larger community. And there’s something incredibly healing about knowing and feeling that.”

Learning techniques to handle our anger can enrich our lives. â€‹First, checking in with the body lets people know if they are indeed angry. A racing heart? Sweating? Jiggling of arms or legs? Then, a person may choose to walk away from the situation. Stepping back helps one regain control of one’s response. Baldwin practices a two-second rule, in which she assesses the consequences of a response before she reacts.

Mindfulness meditation can dissolve the urgency of a situation. “Sit still and tune in to your thoughts and feelings as they come up, acknowledge them and let them go,” says Ettensohn.

Other techniques include exercise and the written word. A vigorous workout can help burn off adrenaline and assist in shifting perspectives. And for those who are struggling to express their feelings to others, Ettensohn says journaling can help people find meaning and patterns.

Finally, Brady advises, avoid using technology to discuss upsets. “Technology has taken away the human heart,” says Brady, who suggest having a face-to-face conversation instead of texting and instant messaging.

When the anger is coming from someone else, it’s beneficial to focus on controlling one’s own response. “You can’t control anyone or their behavior–you can only control you,” says Baldwin. Saying “I see that you are angry; would you like to talk about it?” offers the other person an opportunity to share how they are feeling. Remember that anger is closely connected to fear. Speaking calmly and slowly may de-escalate the situation and allow the other person to drop their anger and access their fear instead. Of course, if someone is being physically violent, or is threatening physical violence, it’s best to call 911.