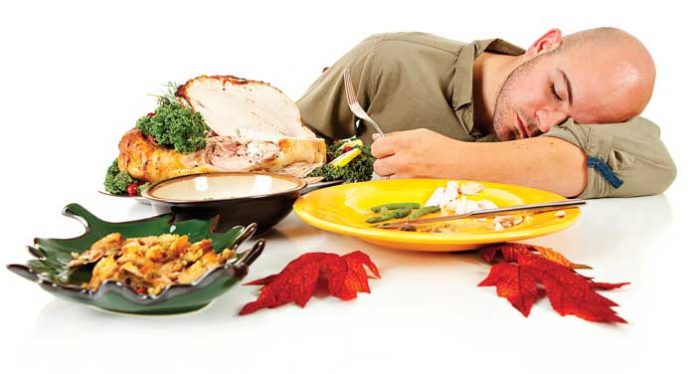 Turkey makes you sleepy
MYTH. The rumor around the water cooler goes like this: It’s the tryptophan in turkey that makes you tired. But while it’s true that the amino acid tryptophan is a precursor to sleepiness-inducing serotonin, turkey alone will not bring on the sandman, according to Michele Canny Gilles, a registered dietitian and the director of nutrition services for Wenmat Sports & Fitness Centers. Turkey and other high-protein sources (such as chicken and pork) contain many amino acids, all of which compete to cross the blood-brain barrier, potentially leaving tryptophan in the dust, explainsGilles. “It’s like there’s one bus, and all these amino acids are competing to get on the bus,” she says. A more likely culprit for drowsiness? Desserts. Carbohydrates trigger a release of insulin, encouraging other amino acids to leave the bloodstream and resulting in “more seats on the bus for tryptophan,” as Gilles puts it. So next time you get tired at turkey time, blame the pumpkin pie.

More heart attacks happen around the holidays
FACT. We wish we had better news. But cardiac mortality peaks at Christmas and again at New Year’s, according to research published in Circulation, an American Heart Association journal. A constellation of factors were cited as possible culprits for what researchers called the “Merry Christmas Coronary” and “Happy New Year Heart Attack,” including an increase of salty and fatty foods, holiday stress and—not insignificantly—delayed medical care. “People sometimes delay going to the doctor because they’re caught up in the celebration and don’t want to spoil it for everyone else,” says John Chuck, M.D., a family physician and chief of health promotion for Kaiser Permanente in North Sacramento Valley. Increased physical stress also can take its toll on the heart, Chuck adds. “I’m thinking of the Christmas football game, when a sedentary middle-aged man suddenly starts running around with the kids. It can be a recipe for disaster.”

The holidays trigger depression
MYTH. There’s a difference between the blues and depression—and during the holidays, it’s the blues whose prevalence grows, says psychiatrist Richard Bowdle, M.D., the medical director for the Sutter Center for Psychiatry in Sacramento. “The literature shows that the incidence of clinical depression actually decreases during the winter months, but the holiday blues increase,” says Bowdle. The difference? Blues are shorter-lived and less intense than depression. “In many ways, holiday blues is a stress response syndrome,” says Bowdle. It’s the multiple stresses that can do us in, he says—not just the demands of shopping, cooking, parties and houseguests, but things like overeating, overdrinking (alcohol, that is) and overblown expectations. To avoid holiday blues, Bowdle offers these suggestions: Maintain realistic expectations, avoid “either/or” thinking (i.e., “either it’s perfect or it’s horrible”), and take time to rest and do something nice for yourself, whether it’s going for a massage or spending time with supportive people. And don’t go crazy on the Cosmos: Too much alcohol can actually bring on the blues.

More suicides happen around the holidays
MYTH. Just as the incidence of clinical depression drops in wintertime, so do suicide rates, says Bowdle. In fact, the rates dip lowest in December and peak in spring and fall, according to the Centers for Disease Control and Prevention. So as stressful as they are, maybe the holi-days also can be a good thing for one’s mental health? That may well be, says Bowdle. “Most people say that the rea-son the suicide rate drops in winter is that the holidays have the most opportunities for social outings and support, offering a protective factor,” he says. Suicides don’t happen as frequently on weekends, either, he adds, which would seem to support the same theory.

A five-pound gain is typical at the holidays
MYTH. Surprise, surprise: Most Americans gain only about a pound during the winter holiday season, according to a National Institutes of Health study. But don’t get too smug: Gilles says while that may be generally true, “there are still people who gain five or six pounds, especially if you go into the holidays thinking you’re going to gain five pounds. Subconsciously, you’re giving yourself permission to eat more than you should.” The NIH study revealed another sobering fact: Research subjects had not lost the extra poundage when they stepped on the scales for a follow-up study a year later, suggesting that holiday weight tends to hang around long after the last drop of New Year’s champagne.

To avoid overindulging at parties, eat beforehand
FACT. It’s always a good idea to have a snack about two hours pre-party, advises Gilles, partly because you can’t predict when the hostess will be serving. “You never know whether you’ll be eating as soon as you get there, or much later,” she points out. Gilles suggests eating a satiating carb/protein combo such as yogurt and fresh fruit. Another tip: Survey party food before plunging in. “Don’t waste your time on potato chips that you can eat any time,” says Gilles. “If someone makes an extravagant apple strudel, that’s where you want to spend your calories.” Keep an arm’s distance from any food, she says, and never—repeat, never—go to a party starved. “It’s the starved state that will put you into a stuffed state, because your body will be screaming, ‘Feed me, feed me, feed me.’” Who, us?

Beer before liquor, never been sicker; liquor before beer, you’re in the clear
NEITHER. There’s no simple answer to this silly little rhyme, says Kaiser’s Chuck, because it all comes down to the individual. “There’s a vast variability in the way people tolerate and metabolize alcohol, which makes it pretty much impossible to generalize the answer with a catchy phrase,” says Chuck. Still dying to know? Look at the way you’ve handled alcohol in the past—“one’s personal experience is the most important predictor,” says Chuck—or, better yet, cut back on the booze. “One or two servings of alcohol at most per day is always a good guideline,” says Chuck. If science seriously wants to answer this question, he says, an “incredibly large double-blind study would have to be done, with tens of thousands of people because of all the different alcoholic combinations. I know many friends who would volunteer.”

Decoration Dangers—Holiday health myths (and truths) extend to pets, too. Here’s a truth: Tinsel and ribbons are bad for Kitty. If ingested, serious stomach and intestinal damage—or even a life-threatening infection—can occur. Source: fda.gov