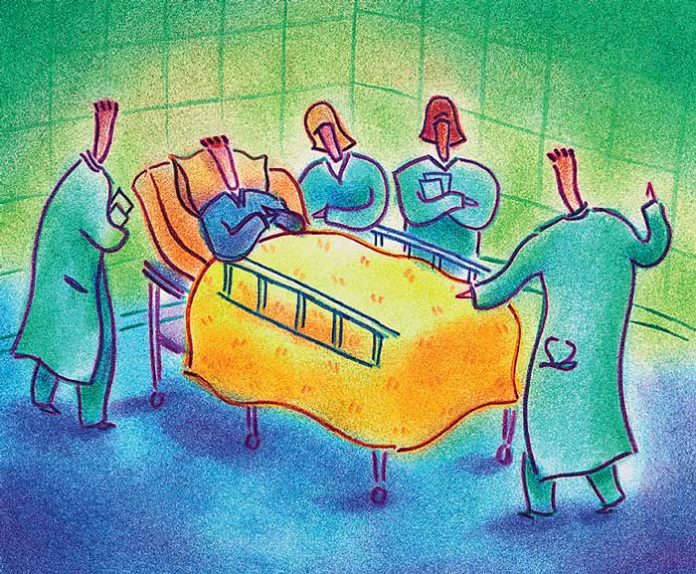 While it’s been said that the process of dying tends to focus one’s mind, the same might be said of convalescing. And the latter usually ends more happily.
I recently convalesced/healed/regrouped for several months from an illness that could have gone cataclysmic but, thanks to the intervention of modern medicine, didn’t. I’m hesitant to tell you my convalescence was a learning experience, lest you stop reading right now. But it was.
From a very young age, whenever I read or heard about someone convalescing from a near-catastrophic illness or accident, I took my imagery from 1930s movies. In those, the convalescent was fabulously wealthy. He or she reposed in a kingdom-size bed, propped upon mountain ranges of plush, down-filled pillows. (No one had allergies in the movies.) He or she wore a velvet robe overcrisp, white, monogrammed pajamas. Unobtrusive servants delivered elegant salvers of medication, to be consumed with ice-cold water poured from sparkly crystal pitchers. Recovery and royalty were interchangeable terms.
My convalescence was relatively comfortable, to be sure, though a smidge less glamorous. But first, allow me to share the “back story”—a Hollywood cliché that, in this instance, may be taken figuratively and literally.
First, the figurative part. When my father neared his 59th birthday, in 1975, he was diagnosed with colon cancer, operated on to remove a section of his colon and fitted with what turned out to be a permanent colostomy bag; he died 17 months later. The procedure turned out to be a textbook example of too little too late.
Now, the literal part. As I approached my 59th birthday, 34 years later, I suffered, for the second time in my life, an abdominal abscess (diverticulitis); it released toxic bacteria into my system and set up housekeeping at the base of my spine, causing crippling back pain. Ultimately, Michael Beneke, M.D., my surgeon, removed the invaded section of my colon, and I was fitted with what everyone assured me would be a temporary colostomy bag. But no matter how many times they said “temporary,” I felt as though I was starting to relive my father’s final year-and-a-half.
I didn’t. The colostomy (along with any suspense I may have been generating with this narrative) was removed four months and two weeks after its install-ation. That, to this point, is the end of the medical story. What happened between my two surgeries, and for a few weeks after the second one, was my period of convalescence.
Because I’ve worked at home since 1984 as a writer, marketing consultant and visual artist, I was able to continue to do so, though not as quickly or for as long as I was used to. And while I didn’t go out to interview people or attend client meetings, as I grew stronger I’d take one- and two-mile walks through my neighborhood, something I loved to do when healthy and now found enthralling. I ran into neighbors I hadn’t seen in years and wondered what they were doing at home in the middle of the day. I finally figured out that many of them, only a few years older than I, were re-tired. This qualified as a wake-up call.
I sometimes brought along on my walks a little sketchpad, thinking it would be nice, at the end of my recovery, to create a painting or a sculpture that captured or summarized the experience. We’ll get back to that.
I filled a lot of my time reading—and we’re not talking Proust or physics here. I plowed through every one of the late John D. MacDonald’s Travis McGee crime novels. They were literate but not literary, and I found that I was never too engrossed to fall asleep in the middle of a grisly murder, expository dialogue or semi-hot sex scene.
I also thought it would be therapeutic to make out a list of advice for those of you who may be going through or someday find yourself experiencing a period of convalescence:

1. Don’t watch daytime television—especially cable shopping channels or soap operas. The former provide instant gratification (you get stuff quickly) but delayed depression (you get bills eternally). The latter will feature at least two storylines about people in hospitals; chances are, they’ll be sicker than you are but that’s hardly cheering. What you don’t need to see and hear right now are intravenous stanchions and heart monitors.

2. I’d also advise against a steady diet of C-Span, the cable network that shows you, in real time, your government in action (or inaction, if you prefer). Watching how long it takes a bill to get heard, much less out of committee, won’t encourage you in your hope of recovering swiftly.

3. As soon as you’re able to, get cleaned up and dressed—every day, if at all possible. For me, nothing contributes more to my sense of ill-being than sitting around, grimy, in a pair of pajamas. (You also don’t want to sit around, clean, in a grimy pair of pajamas.) In the early days of my convalescence, when I had less energy than a snail on Seconal, a shower felt like an undertaking equivalent to building a life-size replica of the Suez Canal out of bread pudding. But I soldiered on, mainly because doing so contributed greatly to my self-esteem: I now smelled so good that my wife’s cats weren’t embarrassed to be in the same room with me.

4. Don’t let people get away with making that classic trailing-off exit remark, “Remember, if there’s anything I can do . . . ” Instead, say something to the effect of, “There sure is, Sparky. Sit down.” Now, naturally, this reply only works if the person making the offer (a) doesn’t live far, far away, (b) is someone you’d actually like to see coming up your walkway laden with casseroles, DVDs and back issues of People, and (c) goes by the name of Sparky. Like many of you, I’ve always had a hard time asking anyone for anything. But if you truly want some items you’re not in a position to will to your bedside—and that would include occasional companionship—convalescence provides a golden opportunity to be someone you’re not (an asker) and not appear to be someone you hate (a taker).

5. Unless your doctors or nurses have given you a list of goals, try not to devise an elaborate set of objectives for your recovery. The whole aim of your lying around, sitting around and, at some point, walking around is to get stronger. This is no time to be falsely peppy; contrary to what you may think, it’ll worry, not gratify, your loved ones if you overdo the I’m-so-energetic bit. They’ll think that if they turn their backs (or leave the house), you’re going to do something phenomenally stupid, such as climb stepladders to change all the light bulbs in the kitchen or regrout the tile floor in the basement. So just relax and do what you’re supposed to use a period of recovery for: recovering.

The true revelation of my recovery turned out to be my wife of a little more than two years, Candy. Veteran nurses marveled at her meticulousness as they watched her change the dressings on my medley of surgical wounds, and tend, unblinkingly, to the indelicate realities of my revised gastrointestinal functions. She also helped me laugh at the sheer unpleasantness of the tasks at hand.
In keeping with that attitude—and because of my aforementioned desire to create an art piece out of this experience—please indulge me for what might not be the most tasteful ending to a magazine essay. In the next few weeks, I’m going to create a sculpture out of all the unused (but non-returnable) colostomy bags we ordered and paid for but no longer need. I’m calling the piece “Goldman Sacks”—proving, I think, that one can get well but still remain essentially sick.