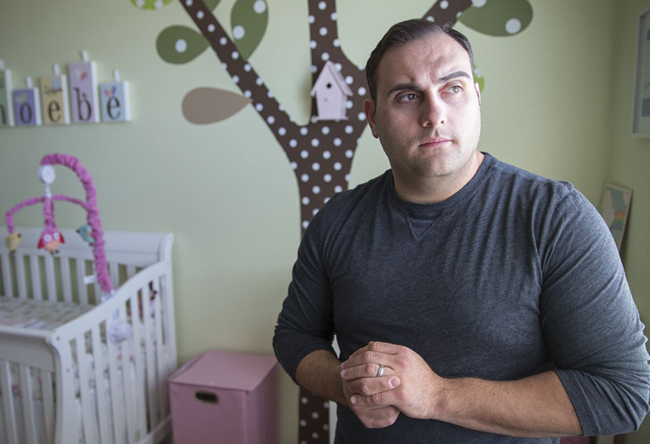 Last August, local radio host Gavin Ferguson and his wife, Stacy, attended a prenatal doctor’s appointment. Their second child—a daughter they would name Phoebe—was due that day, and all seemed well. Phoebe had a strong heartbeat, and Stacy felt healthy. Five days later, however, they received some of the worst news a parent can ever hear. Due to what their doctor referred to as a “fetal bleed,” their daughter had quietly passed away while still in utero. “We could see her heart, and it wasn’t moving,” Gavin says of the heartbreaking ultrasound. “(The doctor) looked at us and just said, ‘I’m so sorry.’”

Thus began a journey that the Fergusons never anticipated taking: a journey through devastating loss, complicated grief and surprising solidarity.

Stacy’s labor was induced, and she delivered her stillborn infant at Sutter Roseville Medical Center. “The physical pain is nothing compared to what you’re going through emotionally,” says Stacy. The hardest part, though, came next. “Holding Phoebe, and then having to give her to the nurse to take her, and then to know that I wasn’t ever going to hold her again. . . . That was the hardest moment of my life.”

According to the Centers for Disease Control, about 1 percent of all pregnancies end in stillbirth. Very rarely is stillbirth the result of something the mother did or didn’t do. Nevertheless, many people who experience a stillbirth find themselves in a desperate search for answers, and they often are quick to unjustly blame themselves. In explaining this phenomenon, Gavin points to something former Princeton, N.J., mayor Barbara Boggs Sigmund wrote for The New York Times while battling terminal cancer: “We humans would rather accept culpability than chaos.” To admit that the unexplainable loss was not anyone’s fault, least of all their own, the grieving parents must face the fact that they are ultimately unable to prevent tragedy, that heartbreak can occasionally occur simply as a result of random chaos.

“What I have most often seen with my patients who have gone through a stillbirth of a baby is blame (of themselves, of people bringing stress to their lives, of the medical professionals involved),” says Priya Batra, a psychologist specializing in women’s health at Kaiser Permanente Point West Medical Offices in Sacramento. “This can be a time of tremendous relationship/marital strain as well. If the couple copes in different manners from one another, if communication is strained or nonexistent, or one member of the couple blames the other for situations that transpired during the pregnancy or delivery, it can have a deep impact on the relationship.”

The Fergusons got into therapy right away. They were fortunate to have an existing relationship with a therapist who is a trauma specialist, and they saw her twice weekly in the initial months following their daughter’s stillbirth.

A strong marital foundation and diligent sessions with their therapist helped the Fergusons avoid the marital strain that can be so common following a devastating loss. “We have been lucky in that this has actually brought us closer together,” says Gavin. “We realize we are the only two people who have lost Phoebe. That is a heavy concept, but it brings us together. We understand that we have to help each other through this.”

The Fergusons also found support through their network of family and friends. Stacy has several friends who texted her every single day in the months following Phoebe’s birth, gestures that provided a constant, reliable sense of being supported. Gavin notes that women seemed more willing to lend emotional and verbal support and that men were more likely to stay away. “It made me feel like I had a disease,” he says of the way that some people seemed to step out of his life in the face of his grief.

Not all men turned into wallflowers, though. One of the most comforting conversations Gavin had following the loss of his daughter was with his friend, Hank. “What is the ideal way people say they want to die?” Hank asked Gavin while they sat in the backyard one day. The two men reflected on the notion that to pass away peacefully in one’s sleep is generally thought of as the most comfortable option, and that Phoebe wasn’t just sleeping peacefully when she passed away; she was in the most perfect environment possible, in her mother’s embrace. “I got a lot of comfort from that idea,” says Gavin.

The Fergusons also developed new relationships as they sought out support and healing. “I felt like a crater in the community,” says Gavin of his initial feelings about how his grief was perceived by others. “You want to talk to anyone who will listen, who will hear you. I just wish more people talked about this.”

Gavin acknowledges that many people who haven’t gone through a similar experience simply don’t know how to respond, and he admits that many well-intentioned people made unhelpful remarks such as “everything happens for a reason” or “at least you have another child.” The Rev. Cliff Haggenjos from St. John’s Episcopal Church in Roseville visited the Fergusons while they were still in the hospital and provided comforting reassurance. “People will say all kinds of things to you,” he said. “People will tell you that this is God’s plan. But let me assure you, anyone who says that is seriously misguided. This is not God’s plan.”

Shortly afterward, the Fergusons were referred to a group called Sharing Parents, a local support group founded in 1981 for families that have experienced pregnancy or infant loss. “I needed to find these people,” Gavin says of connecting with other parents who had experienced a stillbirth. “I needed to see them walking around in society, adjusted. It felt like proof that I could survive.”

Kurt Seckington, president of Sharing Parents and father of a baby named Everett who was stillborn in 2012, had a similar experience. “I felt like the worst thing that could happen to a person in the entire world had happened to us, like we had been singled out. I felt so alone.” When he attended his first Sharing Parents meeting, he says he was stunned to see other families that had experienced the same thing right in his own community within the past couple of months. Why doesn’t anyone talk about this? Kurt wondered as he realized how many families are affected by pregnancy loss despite the fact that he hadn’t had a single conversation about it before his own experience.

Gavin’s job as co-host of the KDND 107.9 FM morning radio show “Wake Up Call” also proved to be a valuable resource in connecting the couple with other local families that had survived their own stillbirth and pregnancy loss tragedies. Seven days after learning of Phoebe’s passing, Gavin and Stacy appeared on “Wake Up Call” and tearfully shared their story. Almost immediately, listeners began calling in to share their own stories and offer understanding and well wishes. “It felt like many of our listeners had been affected by pregnancy loss,” Gavin says of the surprising outpouring of solidarity, noting that it was especially helpful to hear from people who went on to have additional children after their loss and were now living full, happy lives.

Stacy developed a small network of women who’d lost infants through stillbirth and found those relationships to be an invaluable source of support. “Since people can’t truly ‘get’ this experience unless they’ve been through it themselves,” she says, “having a few friends to talk to who actually ‘get it,’ and all of the complicated intricacies that go along with it, is both healing and invaluable.”

“With a stillbirth,” says Batra, the Kaiser psychologist, “the relationship with the deceased was one built on anticipation, hope and dreams. There was not a chance to know that individual and to form a bond built on experiences.” Of the lifelong nature of the grieving process, Batra adds, “When we lose someone else from our life, we are able to move forward with memories and experiences. That just can’t exist with stillbirths.”

Gavin compares the grieving journey to the healing of a physical wound whose scab can get picked off at any time, revealing skin that is still extremely tender. He reports that he and Stacy are currently doing “OK,” but he admits that their emotional status remains a sliding scale that can fluctuate minute by minute.

The Fergusons are using their experience to help other local families that find themselves navigating the same difficult road and to create a community dialogue around the difficult topic. Recently, they returned to Sutter Roseville when the hospital received a device called a CuddleCot, donated in Phoebe’s honor by a Livermore woman who lost a son in stillbirth last year.

The CuddleCot is a cooling device that preserves the body of a stillborn baby so that parents can extend the time they have with their newborn before saying goodbye. “There is a saying that a mother instinctively protects her child,” Stacy said at the ceremony. “A grieving mother protects her child’s memory.” She added that having the CuddleCot installed in Phoebe’s honor “feels like she’s making a difference somehow.”

The Fergusons are also working to organize a 5K run called Phoebe’s Flight, tentatively scheduled for October, which would raise money to fund therapy for local families that have experienced pregnancy loss. “You have to tell people,” Gavin says of the importance of talking about the feelings of grief and loss. “You can’t bottle it up. You have to lean on someone willing to give you help.”

Phoebe’s nursery in the Fergusons’ home looks exactly the same today as it did on her due date, decorated with an array of phoebe birds, a species of songbird that has become a symbol to Gavin and Stacy of their daughter looking down on them. Gavin has since gotten an image of the bird tattooed on his chest. And as the Fergusons continue to heal, building solidarity with each other and the broader community by sharing their story, the song of the phoebe bird can be heard wherever they go.