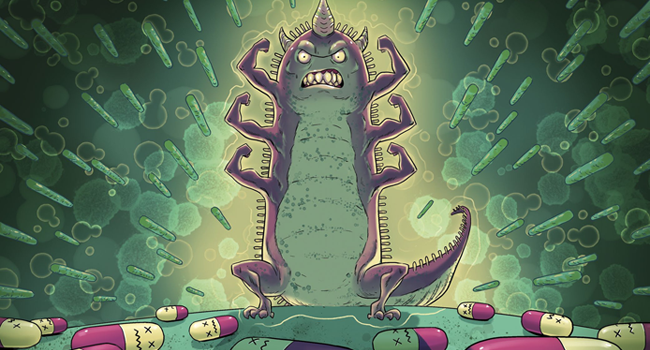 You’re sniffling. You’re sneezing. You feel like you got run over by a truck. Maybe your mucus is a lovely shade of chartreuse. You hurry to the doctor and get prescribed a course of antibiotics that are guaranteed to make you better. Even if you don’t really need them, they won’t do any harm, right? Wrong.

“The Centers for Disease Control estimate that up to half of antibiotic prescriptions written in doctors’ offices are unnecessary,” says Michael C. Lucien, M.D., a pediatrician at UC Davis Medical Center. “They are now urging physicians to change their prescribing habits.”

What used to be a cavalier attitude toward antibiotics has shifted radically in the last 10 years as more and more cases of drug-resistant bugs have been identified. Lucien notes that because of the overuse of antibiotics throughout the years, some strains of bacteria are now resistant to almost every antibiotic now available—a terrifying thought, especially for anyone who’s a fan of medical thriller movies like “28 Days Later” (a mysterious, incurable virus spreads throughout the UK), “Contagion” (the CDC races to cure a worldwide epidemic of a mysterious deadly virus—catchy tagline, “Nothing spreads like fear”) and “Quarantine” (a TV reporter and her cameraman are trapped inside a building quarantined by the CDC after the outbreak of a mysterious virus that turns humans into bloodthirsty killers). The public apparently loves to scare itself silly about our impending demise due to incurable illness. But with the widespread overuse of antibiotics, that possibility might not be as Hollywood as one would like to imagine.

“Overuse of antibiotics is a definite threat, and I have always prescribed them cautiously, as this was impressed upon us very heavily in our medical training,” says Dana Hawkins, M.D., a family physician with Sutter Medical Group. “We are definitely seeing more resistance, such as MRSA, and now treat almost all skin infections as such.”

MRSA—or Methicillin-resistant Staphylococcus aureus, a type of staph infection that’s become resistant to many antibiotics—is an example that comes up often in research regarding “superbugs” and their increase in the human population.

“MRSA was acquired more frequently in the hospital starting in the 1980s,” explains Stephen Parodi, M.D., an infectious disease specialist at Kaiser Permanente in Vacaville and Vallejo. “In the mid- 2000s, the bacteria became much more common in the outpatient community in people who’d never been in the hospital. The bacteria had mutated and was now a different strain. From a genetic standpoint, the new version was able to spread more easily, and we saw an increase in infections all over Northern California.”

MRSA is not the only infection that’s increased. The rise of Clostridium difficile, or C. diff, a serious bacterial infection that can occur after prolonged antibiotic use, became a concern in Northern California during the mid-2000s as well.

“C. diff is largely acquired in the hospital and becomes an infection after someone has been exposed to antibiotics,” Parodi says. “When it mutated, we saw an increase in hospital-related infections and death because the bacterium had become stronger.”

Before you start preparing your bunker and hazmat suit and hunkering down for the disease apocalypse, it’s important to know that although the rise of drug-resistant bacteria has grabbed headlines during the past few decades, medical professionals like Parodi and Hawkins are actively fighting the trend by prescribing fewer antibiotics overall. The effort seems to be working.

“We can safely say that over the last 10 years, we’ve reduced the amount of antimicrobials we prescribe, both in the hospital and in the medical office/clinic setting,” Parodi says. “It’s not uncommon now for patients to have some awareness about superbugs and resistant bacteria in the community and for them to have heard about potential side effects. There’s a greater awareness that antibiotics don’t work against viruses (like the flu or a cold), so conversations are a lot more informed.”

Education has become perhaps the single most important component in the fight against drug-resistant bacteria in recent years, thanks to a program launched in California in 2014.

Zhu explains that the state of California recognized the importance of these programs and passed legislation in 2014 requiring hospitals to adopt and implement an antimicrobial stewardship policy in response to the growing crisis of antibiotic resistance. In fact, California is the first—and remains the only—state to enact such legislation. Since 2008, California law required that general acute-care hospitals develop a process for monitoring the use of antibiotics, to be evaluated by quality improvement committees. In September 2014, California Senate Bill 1311 was signed into law, further requiring hospitals to adopt and implement an antimicrobial stewardship policy in accordance with guidelines established by the federal government and professional organizations, and to establish a physician supervised multidisciplinary antimicrobial
stewardship committee with at least one physician or pharmacist who has undergone specific training related to stewardship. Nationally, a presidential executive order, Combating Antibiotic-Resistant Bacteria, was issued in September 2014, requiring federal agencies to review existing regulations and propose new ones that help hospitals implement robust stewardship programs.

In practice, this means that physicians like Parodi review electronic patient records to find people currently taking antibiotics that could be overly aggressive.

“In an inpatient setting, we’re able to contact the team that’s taking care of the patient and help them modify, change or discontinue antibiotic use,” Parodi says. “On the outpatient side, we write guidelines. We are a collective group of infectious disease specialists in Northern California (there are 50 just within Kaiser) who get together and talk over what medicines work best based on our experience, the resistance profile of the bacteria and national guidelines from the CDC—with recommendations for which antibiotic to prescribe so doctors don’t have to memorize all the information.” The system has become increasingly sophisticated over the years: A doctor can type a word such as “sinusitis” into the computer and a recommended prescription, the duration of treatment and alternatives in case of allergies will all pop up. “It’s a one-click shop to streamline and standardize treatment,” he says.

The work of these stewardship teams has been rewarded with resounding success. In a study conducted at UC Davis Children’s Hospital, researchers discovered that the rates of C. diff decreased from 9.2 to 2.8 per 10,000 patient days after the antibiotic stewardship program was instituted—a greater than threefold reduction. Parodi has seen similar results at Kaiser, where resistance rates have stabilized over the past five years, thanks to the stewardship program in conjunction with control efforts such as increased hand washing and infection isolation.

“That tells me that we do have a way to control the spread of infection and prevent more of these resistant superbugs from infecting us,” he says.

But the fight is hardly over. Vaccination opponents have jeopardized the progress of these programs, says Parodi.

“A critical part of our work is to make sure people understand the individual benefits of vaccines and the benefit to their loved ones and the general community,” he says. “If you look at influenza, for example, when we have a good match with the vaccine, we’re seeing the reduction of individuals hospitalized and, with that, a reduction in the number of secondary bacterial infections. Vaccines are an adjunct to stewardship.”

The removal of antibiotics from our food is another hot topic.

“At a White House conference last year, we discussed antibiotic prescribing in animals—not just to treat infections, but to promote growth,” Parodi says. “The risk is that if antibiotics are prescribed in a wholesale fashion, bacteria resistance can develop when the animal products are passed to humans. There’s finally been an acknowledgment by the food industry that this needs to be addressed.” At the conference, there was widespread agreement to take action to reduce or eliminate antibiotic use in animals. “This is the first step toward preserving their use for human infections—when they’re needed the most,” he says.

Though antimicrobial stewardship and enlightened lawmaking are making impressive progress toward ensuring a future that doesn’t include mysterious worldwide epidemics, Zhu reminds us that the responsibility lies not just with physicians but with us.

“Ultimately, the responsibility for preventing resistance is a societal obligation,” she says. “Every individual needs to be a steward of judicious antibiotic use so that these drugs can retain their effectiveness in treating and preventing disease.”

After all, we wouldn’t want to live in a “Contagion” scenario, now, would we?