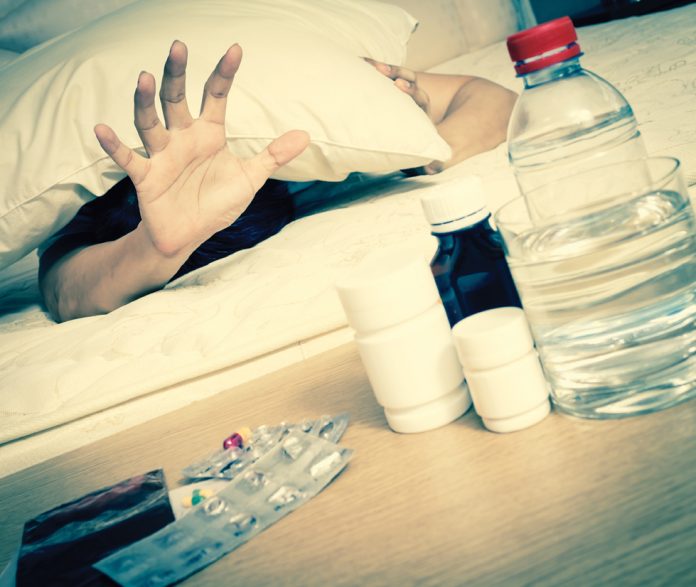 Hangovers are funny things. Not only are they a classic trope for Hollywood comedies and rather hilarious when they’re happening to someone other than you, but they’re strangely hard to pin down. Ask the average drinker to define a hangover, and he’ll mention a few symptoms; ask another and she’ll mention a whole different set of symptoms. For some folks, it hits them in the gut. For others, it’s all about the screaming headache. For some lucky few (studies say one in five), there don’t appear to be any bad results at all.

Even more mysterious is why we get them in the first place. The medical community is in no way sure why drinking alcohol the night before makes most of us feel so bad the day after. According to the Alcohol Hangover Research Group, an international group of scientists, a hangover results after a drinker has reached a blood-alcohol concentration of 0.1 percent, and then returns to a concentration of zero. A hangover, the group says, “is characterized by a feeling of general misery that may last more than 24 hours. It comprises a variety of symptoms including drowsiness, concentration problems, dry mouth, dizziness, gastrointestinal complaints, sweating, nausea, hyperexcitability and anxiety.”

The research group says dehydration, typically cited as the main culprit of hangover, might be a side issue and not related to the headache and nausea that usually accompany a night of overindulging. However, it’s still an issue and should be treated.

Another of the great mysteries of hangovers is why so few medical researchers have spent any discernable time trying to ferret out the causes and possibly come up with reliable remedies. It feels like there would be a gold mine to be had if a pharmaceutical company could concoct a reliable “hangover cure.”

So, in the absence of such a silver bullet (and I’m not talking about Coors Light), I spoke with bartenders, beverage experts and medical professionals about the best things you can do before, during and after a night of drinking to at least tamp down the negative effects of hittin’ the sauce.

Dan Scott stands proudly in front of his repurposed buffet table in his charming East Sac backyard. The table is laid thick with meats and cheeses from nearby purveyor The Cultured & The Cured. “If you’re an adult and you’re going to drink, you need to have a plan,” he says in his impressively booming voice, “and eating is part of any good drinking plan.”

Scott knows of what he speaks. Not only is he the founder of Sacramento Beer Week and a freelance food and beverage writer, he also has a bachelor’s degree in health science from Loyola Marymount University and a master’s in public policy and administration from Sacramento State. He has worked 10 years as a nutrition educator for children and adults in schools, workplaces and community organizations. His new nonprofit endeavor, Craft Responsibility, works to inform and educate beer lovers, beer makers and communities about responsible enjoyment of craft brews.

“The best way to avoid, or at least temper, a hangover,” Scott says, “is to not get too drunk in the first place. And there are more ways to do that than you think.”

As he happily munches on treats laid out on the table, Scott tells me the first line of defense against drunkenness is a full stomach. We’ve got a cooler full of rare beers next to the table just calling our name, but first, we have a healthy sampling of pate, salami, goat cheese, crackers and fresh-from-the-hill apples.

“Fats,” he says through a mouthful of brie, “help a ton. They help delay the absorption of alcohol and keep your blood alcohol level under control. Just as important are dense carbohydrates and proteins.”

He knows what he’s talking about. According to a 1994 Swedish study, drinking on a full stomach can reduce blood alcohol levels by as much as 30 percent.

“Also, just have a drinking plan,” he says. “If you’re going to a dinner party where you know there’s going to be multiple bottles of wine, don’t go out for cocktails before. If you know you tend to order more drinks if you stand at the bar, grab a table and make it your home base. If you get drunk too fast when doing shots, don’t do shots.”

I ask Scott what his drinking strategy is for the hours-long beer events and brewers showcases he helps organize as part of Sacramento Beer Week.

“First, I make sure that water is easily accessible and free for all attendees. I typically have a bottle clipped to my belt at all times. Then, I spend a good deal of time walking around, talking with brewers and having reasonably sized samples of their beer. If someone is pouring full glasses at these events, I give them the eye.”

I’m soaking in the smell of smoked meats and tasty fried bits at midtown’s best barbecue joint, Tank House BBQ and Bar. It’s Tiki Tuesday, and bartender Buddy Newby is serving up an amazing array of island-themed drinks. Sure, there’s a mai tai and a zombie, but there are a few unique concoctions as well that involve ingredients like flaming Bacardi 151, burnt cinnamon and housemade “dragon” juice.

I enjoy every moment of the night, the swinging tunes played by the Hot City trio, the great food turned out by Tank’s kitchen and the great company of my wife and good friends. Perhaps I enjoy it, and focus on the moment that much more, since I know that Tiki Tuesday will invariably lead to Wipeout Wednesday. It’s not due so much to irresponsible overimbibing, but rather to what we’re all drinking.

I ask Buddy the bartender what he does to keep the hangovers to a minimum. “To avoid a hangover,” he says, “best not to drink alcohol. But if you must imbibe, drink clear alcohols like gin or vodka, and have a glass of water for each drink you put down.”

Newby’s advice is spot on, and there’s research to back it up. According to the Alcohol Hangover Research Group, alcohols with various levels of “congeners” can greatly affect the severity of a hangover. A congener is a substance that flavors and colors a drink. Liquors high in congeners are typically deep in color, like brandy, whiskey and red wine.

In fact, in a 2006 study, subjects rated their hangovers based on the alcohol they’d been given the night before. The worst hangovers hit after nights of drinking brandy, red wine, rum or whiskey. The effects were diminished with white wine, gin, vodka and beer. Those subjects who drank pure ethanol with a single mixer, like orange juice, experienced the least severe hangovers.

The dark rum and other exotic liquors in my awesome island cocktail at Tank House will do me no good the next day. But it’s not just the alcohol portion of the drinks that will cause me harm; it’s also the sugary mix-ins.

Studies have shown that mixing alcohol with high-sugar fruit juices, sugary sodas and plain sugar will increase the severity of the next day’s regret. Dan Scott echoes the sentiment. “Your best shot at avoiding a hangover is by drinking vodka and soda,” he says. “The more sugar and flavor you add to a drink, the worse off you’ll feel the next day.”

So I guess the takeaway is keep it light—either in the amount of alcohol you consume or the color of the drink.

No matter what time you wake up, it’s too early. The light is too bright. The birds are too loud. The overriding emotion you’re experiencing is regret. Your headache is anywhere from mild to skull-shattering. Your GI tract is in full revolt. And your wits are as useless as a rubber crutch. You, my dear friend, have a hangover. There are very few things that will legitimately make you feel better once you’ve arrived at this state. And almost every remedy you’ve ever heard of bears no stamp of scientific approval. We are now in the arena of old wives’ tales, folk medicine and quackery.

Does a hot bowl of menudo do the trick? No one knows. How ’bout a glass of raw eggs? Sounds disgusting. Eat a big, greasy meal, right? Can’t hurt, and it tends to lessen the nausea.

Drink a ton of water? Always a good idea, especially since, as we mentioned before, dehydration is typically a co-condition along with hangover. But, unfortunately, water itself not a remedy.

There is one “cure” that both Scott and Newby agree should never be taken: acetaminophen. And it’s not just them; read the label on a bottle of Tylenol or Excedrin (both of which contain acetaminophen) and you’ll see warnings about mixing this painkiller with alcohol. The problem is your liver. Already weakened by a night of drinking, your liver is weakened even further by the drug.

I talked with Rick Sellers, owner of The Owl Club in Roseville. He’s a longtime brewer and maker of some of the finest drinks in all the land. His take on dealing with hangovers is a bit more holistic. When I asked him, by email, if he had anything to say about hangovers, he responded with this:

“Embrace the hangover. You may have to ride it out at work, or just camped on the couch watching football, but if you’ve seriously tied one on the night before, there’s a good chance you’ve got a good story to add to your collection. Just learn to appreciate the ride, that reason you were out so late anyway. . . . Were you with great friends? Celebrating an achievement? Mourning the loss of a loved one? Any of these celebrations or sorrows is what makes this life so great.”

I think we can all agree with that sentiment.