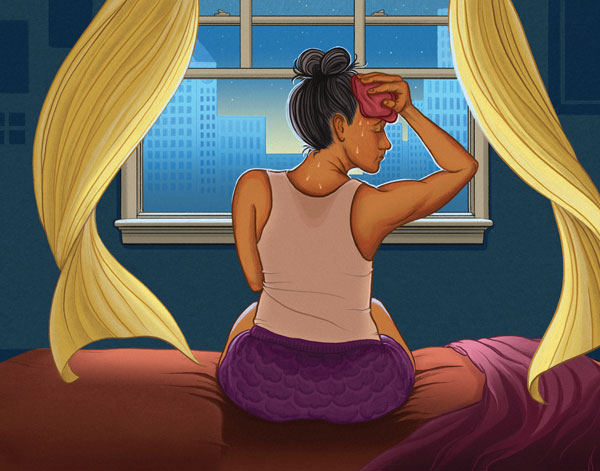 There is a scene in the first season of “House of Cards” where Claire Underwood is in her elegant Georgetown kitchen, every hair in place, but standing—with obvious relief—in front of the wide-open side-by-side refrigerator. And every middle-aged woman watching the episode knew immediately what was going on: 46-year-old Claire was having a hot flash.

But sometimes you just can’t stand in front of a fridge. And for some women, hot flashes (or “hot flushes,” the medical term) aren’t a minor thing. They impact work—imagine dripping in sweat in front of your English lit students or during a final argument to the jury—and may also be accompanied by night sweats that soak your pajamas and your sheets, wake you up and keep you from a good night’s rest.

It used to be hormone replacement therapy, but in the early 2000s, a landmark study, the Women’s Health Initiative, shut down its arm of HRT research because, researchers concluded, the risks of the drugs outweighed the benefits. This unexpected news caused many doctors to stop prescribing HRT and many patients to immediately reject their use.

Since then, new studies have been carried out and the WHI data has been re-reviewed, resulting in conclusions that seem to have taken yet another turn: Hormone treatment, or HT, as it is now called, may actually be both safe and effective for perimenopausal and menopausal women.

This month, two local experts—women themselves—weigh in with advice. (Feel free to stand in front of your open fridge as you read it.)

The Heart of the Matter–“First, it’s important to understand the difference between HT use for prevention (as opposed to) treatment,” says Elaine Waetjen, M.D., professor of obstetrics and gynecology at UC Davis. “The WHI was designed mostly to determine whether HT should be used for prevention of disease.”

This was very different, say both doctors, from earlier uses of hormones. Until the early 1990s, estrogen (with or without progestin) was prescribed primarily by OB-GYN physicians for women in their 40s and 50s—directly before and after menopause—to specifically treat hot flashes and night sweats. Duration was short—five to seven years—and patients stopped taking estrogen when their menopausal symptoms abated. “It was never prescribed for women in their 60s unless they were having problems of some kind,” says Katherine Gillogley, M.D., division chair of the OB/GYN department at Mercy Medical Group, a service of Dignity Health Medical Foundation. And no doctor expected women to stay on the drugs for the rest of their lives.

But beginning in the ’90s, it was theorized that hormone treatment offered older women protection from cardiac disease, and as a result, many physicians started prescribing the drugs for just this very purpose. “I was done with my residency and practicing then,” says Gillogley. “And there were cardiologists putting women in their 60s and 70s on estrogen—women who had never been on (hormones) before.”

Despite this radical change in its use (and the growing number of older women being prescribed hormones on a permanent basis), the theory that estrogen prevented heart disease had not been fully researched. So the WHI followed this new subset of women, at an average age of 63, and—in a surprise to almost everyone—found the reverse to be true. The WHI halted the study in 2002, and its conclusions remain unchallenged today: According to the North American Menopause Society, women who start HT more than 10 or 20 years from menopause onset, or are age 60 or older, are actually at greater risk of coronary heart disease, stroke, deep vein thrombosis and dementia. “The WHI answered the question of whether women over 60 should take hormones,” says Gillogley. “And the answer is ‘no.’”

The Public Reaction–But many doctors—and their patients—took more away from the WHI’s sudden decision to halt the study. In fact, many made the decision to avoid HT entirely, even for younger women—a decision they are sticking to, some 16 years later.

“Most family-practice physicians are very afraid of it and won’t prescribe it,” Gillogley says. “And a lot of women are afraid of it, too; they are more interested in natural remedies.” These include soy foods and soy powder—which have been shown to reduce hot flashes by half in some patients—and certain dietary supplements. “Black cohosh is better than placebo,” says Gillogley, who recommends the Remifemin brand, produced by Sshaper & Brümmer, a company headquartered in Germany, where dosages of herbal remedies are regulated.

There are also more mainstream pharmaceutical alternatives to HT, say experts. “For example, vaginal moisturizers and sexual lubricants can be used to treat vaginal dryness and some pain with intercourse,” says Waetjen. “And for hot flushes, there are some low-dose antidepressant medications that can work well for some women.”

These include Effexor and Paxil—the latter of which actually has an FDA-approved low-dose version specifically for the treatment of hot flashes. Experts suggest antidepressants might be especially appropriate if a perimenopausal or menopausal patient has an underlying depression, and Paxil can help with sleep, which can be elusive for middle-aged women. “But Paxil comes with a suicide black-box warning,” says Gillogley, “which has dampened (patients’) enthusiasm.”

Which leads us back to the question: What about HT as it was originally intended—as a short-term treatment method for perimenopausal and menopausal symptoms?

Today’s HT–According to North American Menopause Society, “HT remains the most effective treatment” for hot flashes and vaginal dryness and has been shown to prevent bone loss and fracture. Are there women who might benefit from HT then? If so, who are they? And are they being unnecessarily waved away from the drugs?

First, of course, not everyone suffers unduly during the years leading up to—and immediately following—menopause. Just like menstruation or childbirth, women have different experiences. “There is a really wide range,” says Gillogley. “Some patients start skipping periods or just stop having periods but really have no problems, beyond some mild hot flashes.” For these patients, HT is probably unnecessary. Standing in front of a fridge, like Claire Underwood, dressing in layers and opening windows in your bedroom at night might in fact do the trick more often than not. But not everyone is in that lucky group.

“A fair number of people have pretty severe symptoms,” says Gillogley. “To me, they are really suffering, but they don’t want to take hormones.”

Should every woman steer clear of HT? Or are there patients for whom the drugs might be indicated? “The ideal patient . . . is undergoing a natural menopausal transition and would be having bothersome hot flush/night sweat symptoms—hot flushes that interfere with her work and night sweats that (leave her) fatigued during the day,” says Waetjen. “She would be perimenopausal (meaning her periods have become irregular) or just postmenopausal (meaning she has just stopped having periods) in her late 40s/early 50s. She would have no personal history of breast cancer or other hormone-sensitive cancer or cardiovascular disease.”

Other contraindications, says Gillogley, are smoking, being overweight, a family history of blood clots or having uterine fibroids (which won’t shrink after menopause, as they normally do, if a woman takes hormones). Lastly, a patient would likely not be prescribed HT for more than 10 years after her final menstrual period or beyond the age of 60, and her clinician would see her regularly to assess her risks and benefits, which can change as she ages.

All of this, say experts, is a significant topic of conversation in their offices, particularly when HT studies hit the news (as one did last fall). “I’m definitely not pushing HT—it’s not for everyone,” says Gillogley. “But it really does improve some women’s quality of life . . . and if it improves quality of life, if it helps, then it’s the answer.”

Bioidenticals
As physicians and patients moved away from conventional HT in the early 2000s, interest grew in another form of hormones, especially after the release of actress Suzanne Somers’ 2007 book, “Ageless: The Naked Truth About Bioidentical Hormones.” Are they an option? Are they safer or more effective?

First, the term bioidentical hormone can mean two things, says Waetjen: “It can be used to describe specific standard pharmacological medications—estradiol and progesterone—which are identical to the hormones produced by the ovary and which are distinct from other HT options, such as Premarin (made from pregnant mares’ urine) or Provera (a synthetic form of progesterone).” Although there isn’t enough scientific data to know these formulations are better than synthesized versions, she says, many clinicians and many patients prefer them.

The second type of bioidentical hormone includes a number of estrogens produced by the body that can be compounded to each individual’s specifications in compounding pharmacies—usually in the form of pills, creams, patches and gels. Waetjen warns these bioidenticals are not well studied and are not recommended by the American College of Obstetricians and Gynecologists or the North American Menopause Society. “There is no evidence to suggest the blood and saliva tests used to determine an individual’s unique ‘need’ for a specific compounded formulation are accurate and predictive of better relief of symptoms,” she says.

But Gillogley says there could be some benefits. “I will fill these prescriptions for new patients—it’s OK for them to continue what they’re doing,” she says, adding there is also evidence that transdermal delivery has less effect on the liver—as opposed to taking a pill that goes through your stomach—and that might reduce the risk of blood clots. “The risks don’t completely go away with transdermals,” she says, although it also isn’t always clear how much you are absorbing through a patch or cream. “And if it isn’t absorbing, it’s really just a placebo, which might be a good thing. It might be the best therapy of all.”