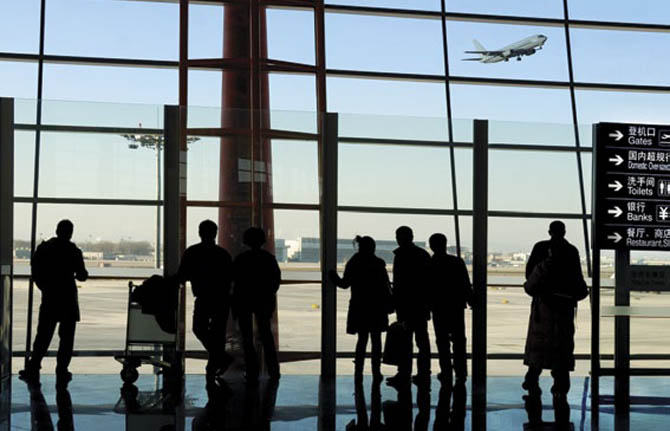 If your summer vacation involves air travel, you’ll want to stay healthy so you can enjoy your getaway (and avoid strange doctor’s offices, too). Here are five flight risks— and steps you can take to avoid them. SNIFF, SNIFF. The last thing we want to do once we reach a vacation destination is come down with a cold. Yet we raise our risk of catching one as much as 113 times when we step on a plane, according to a 2004 study in the Journal of Environmental Health Research. Not so surprising, really, but perhaps this is: According to the same study, the much-maligned “recirculated air” may not be as much to blame as we thought. Rather, the biggest culprit may be super-dry cabin air, which dries up mucus membranes, making us more susceptible to infection. Of course, it also doesn’t help if you touch contaminated surfaces, such as tray tables, lavatory doors and latches on overhead bins. “The things we touch on a plane have bacteria, viruses and a whole host of organisms on them [that] can get you sick,” says Anthony Russell, M.D., a pediatrician and travel medicine expert for Kaiser Permanente in Sacramento. Sitting in close proximity to sickies, especially over an extended number of hours, can be problematic, too. So what do you do if you’re sitting next to sneezy Sam? Simple: Ask to be moved. But if that’s not possible, don’t be shy about asking your plane pal to practice better hygiene, Russell suggests. “People from different parts of the world have different patterns of hygiene for colds,” he notes. “Politely ask them to cover their mouth with their hand when they cough.” The rest of the advice is standard anti-cold stuff: Wash hands frequently with soap and water and/or an alcohol-based hand sanitizer; keep your hands off your face, especially eyes and nose; and drink lots of water (but not the stuff from the plane lavatory, which can make you sick). Another good idea: Carry antibacterial wipes and use them to disinfect trays, door handles and other surfaces. But don’t make yourself too crazy. “Sometimes you can become too fanatical about things, and that’s stressful,” says Russell. “You still want to be able to enjoy yourself.”

SERIOUS DISEASES. Whereas the common cold is an unpleasant but fleeting annoyance, air travel also raises the risk of more serious disease. Among them: food-borne illnesses and poor climate acclimation, which can result in everything from nausea to sudden death. But the biggest worry, as Russell points out, is that air travel exposes you to people from throughout the world, opening the door to infectious and sometimes deadly diseases such as tuberculosis, polio and measles. “These infections are so dangerous and so easily spread,” he says. “In a confined space on a plane, disease can be spread multiple rows in front of you and behind you.” Your best protection? Get immunized. “Europeans are experiencing a large measles outbreak, so if kids aren’t properly immunized prior to getting on a plane, a simple trip to Europe can easily lead to contracting this illness,” says Russell, who serves as travel medicine coordinator for North Valley Kaiser.

SAY WHAT? True story: A gal pal once lost the hearing in her right ear during a flight, and it took two full months (and lots of nasal spray, decongestants and antihistamines) for her to get it back. Thirty years later, she still struggles with that ear, which is why her preferred mode of travel is now a cruise ship. Fortunately, nothing this extreme happens to most people. But ears are especially vulnerable when you fly, for one simple reason: altitude. “The bottom line is that when you change altitude, you’re changing the air pressure in your middle ear,” explains Ben Goldwyn, M.D., an ear, nose and throat specialist for Sutter Medical Group. “If the pressure in your middle ear is any different than the pressure on the outside, it’s radiant, and that hurts.” Children have more ear barotrauma (the medical name for it) than adults, he says, because the Eustachian tube doesn’t reach maturity until around age 7. (It’s the same reason kids also are more prone to ear infections.) If you don’t have a history of ear problems, says Goldwyn, you’re far less likely to have trouble on a plane. But some people just don’t have good Eustachian tube function, he says, and those are the people who usually get into trouble. Flying with a cold, allergy or sinus issue can mean double trouble, says Goldwyn, who has suffered himself from what he calls sinus squeeze, or sinus barotrauma, which happens when you can’t equalize sinus pressure due to nasal congestion. (It also happens to divers.) “It feels like an ice pick in your head,” says Goldwyn. What can you do about it? “You suffer,” he quips. How to avoid suffering? For starters, don’t get on a plane if you’ve got an upper respiratory infection of any kind. If you must get on the plane, try using a saline spray to keep nasal passages moist and clear. Yawning, swallowing and chewing gum also can help to prevent and combat ear problems by keeping the Eustachian tube open, equalizing air pressure and providing relief.

BLOOD CLOTS. There has long been much ado about the connection between air travel and DVT, or deep vein thrombosis, which occurs when a blood clot forms in a deep vein, usually the leg. The situation can become life threatening if the clot travels and lodges in the lung in the form of pulmonary embolism, or PE. “Long-term travel is one of several conditions that predispose people to DVTs,” explains Gregory Hayes, M.D., a vascular surgeon for Mercy Medical Group. The reason? Studies suggest that the main culprit is prolonged immobility—the kind that comes after sitting in cramped quarters (think economy class) for hours on end. “What happens to these patients is that they sit for prolonged periods of time and they don’t get enough fluid—they get dehydrated,” says Hayes. Traveling for longer than four hours has been shown to double the risk of DVT, and risk is highest the first week after travel. Obesity, oral contraceptive use, heart disease, genetics and height (being more than 6 foot 3 inches tall) are other predisposing factors. Typical symptoms include aching in the leg (usually in the calf), swelling, redness, pain or tenderness, and increased skin warmth. Once a clot has traveled to the lungs, common PE symptoms include chest pain and shortness of breath. To reduce risk, Hayes suggests others do what he does when traveling: Exercise those legs and stay hydrated. “If I’m on, say, a five-hour flight to Hawaii, I make sure to get up and walk around two or three times, at least, and I drink a lot of fluid,” Hayes says. He recommends that patients “stay away from the Venti latte at Starbucks” and instead buy a big bottle of water, pre-flight. Another tip: While sitting, flex and extend your ankles. Applying pressure to the balls of your feet, via massage or just pressing them to the floor, also will help to keep circulation flowing.

JET LAG. Compared to blood clots and tuberculosis, it sounds so benign. Yet jet lag—the bane of any traveler who has found herself tossing and turning in a new time zone—can have harmful long-term effects on brain function, including memory and learning problems, according to a recent UC Berkeley study. Twice a week for a month, researchers subjected hamsters to sixhour time shifts, the equivalent of a flight from New York to Paris. The findings: The hamsters had trouble learning and remembering simple tasks—not just during the jet-lag period, but even after they returned to their normal schedules, suggesting that repeated disruption of circadian rhythms has detrimental effects to the brain. Other effects of jet lag may include indigestion, general malaise, headaches, mood swings and lack of concentration. The only surefire way to prevent jet lag? Don’t travel. But we’d never recommend that. Instead, try these tips from the World Health Organization: Get some zzzzzzz’s before departure, rest during medium-to-long flights, try to get a normal amount of sleep in the 24 hours after arrival, and set your internal clock by getting exposure to daylight (preferably bright sunlight) at the destination. Eating light meals and limiting the booze also will help. And—as always—drink plenty of water, which will ward off dehydration and help you feel better even if you don’t suffer from jet lag.