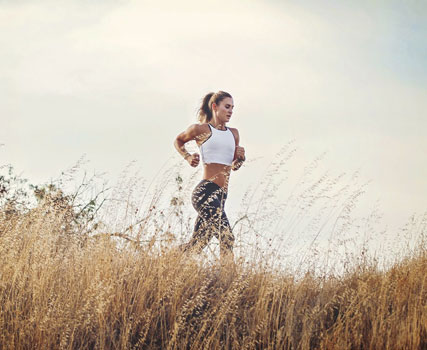 I started running my freshman year at C.K. McClatchy High School, when I joined the cross-country team to stay in shape for soccer during the off season. I was terrible. I had somehow cajoled my friend Amber into joining the team with me, and we spent practice jogging around Land Park at a snail’s pace while we talked about boys and Mariah Carey.

I distinctly remember returning to campus after one such practice and being greeted by our cheerful (and speedy) team captain, who had probably been waiting for us for 30 minutes. When she asked us to join her for some “strides” on the baseball field, I told her—while sucking wind—that I’d meet her over there in a couple minutes, after I cooled down. “This is the cool down,” she informed me. Oh. Nothing about running came naturally for me.

I kept at it, though. I liked being active, and running seemed like a necessary and efficient evil for staying in cardiovascular shape. In the winter, I ran the parking garage stairs at Sac State so I could last longer on the ski slopes. In the summer, I set my alarm for 5 a.m. to hit the McKinley Park loop before that famous (infamous?) Sacramento heat set in.

I never really enjoyed it, though. I rarely looked forward to a run. I was really slow, which was discouraging and sometimes embarrassing. I often found myself drowning in a sea of negative self-talk while I struggled to complete my final lap or resist the urge to walk. Despite the fact that I looked fit and could hold my own in a boot camp class or spin class at Cal Fit, it was evident that I wasn’t a gifted runner. It wasn’t fun for me to be so painfully mediocre at something, having improved little in the decade that I’d been working at it.

I never considered myself a “runner.” Instead, I described myself as a person who occasionally ran. It was a means to an end, an obligation. I was a begrudging martyr, unwilling to quit but unable to really enjoy it, either.

Then, in 2014, a Bay Area friend posted on Facebook that she’d signed up for a 10-kilometer (6.2-mile) trail race in the Marin Headlands and did anyone want to join her? The photo in her post was breathtaking: a woman running on a narrow trail along a grassy hillside, her ponytail trailing in the wind behind her as she looked out onto the Pacific Ocean. I think I’d like running more if that was my view, I thought. I clicked the link and skimmed the logistics. I checked my calendar. I asked my husband if he could hold down the fort for a night so I could make the 24-hour field trip to San Francisco. “I’m in!” I texted my friend, and I entered my credit card information into the race website.

I had a couple of months to prepare and figured I should probably learn something about trail running. I had seen runners on the equestrian trail while I rode my bike on the American River Parkway paths, and I decided that was as good a place as any to start. I drove to Sac State, parked in the garage and jogged across campus to Guy West Bridge. I looked down at the river, sparkly and flowing. I looked out at the trails that stretched out in both directions, surrounded by trees and tall grasses and wildflowers. I crossed the bridge and made my way onto the dirt path, not sure if I was allowed to be there or where exactly the trail led to. I figured I’d run for one-and-a-half miles or until something bad happened, then run back.

I got lost. First in my own thoughts, and then actually physically lost. I forgot to turn around after a mile and a half and, having opted for the path closest to the river at every fork in the road, I ended up in a portion of dry riverbed that I immediately nicknamed Ankle Break Alley. I hopped from rock to rock and eventually made my way back to the dirt, where I started back toward the bridge. I paid more careful attention to the forks in the road on the way back, trying to memorize the landmarks and rule out dead ends. I saw a rabbit. I hurdled a fallen tree. I caught glimpses of runners on the paved bike path through the trees and I wondered if they knew what they were missing. “Aren’t you bored?” I wanted to call out to them.

I returned to the parking garage sweaty and accomplished. I wasn’t sure exactly how far I’d gone or what my pace had been, but I didn’t really care. I couldn’t remember the last time I’d been distracted enough on a run to miss a turnaround. I was usually laser-focused on any endpoint I could imagine, just trying to survive from one mile to the next until it was over.

It was different on the trails. It was an adventure. I had to devote so much energy to dodging branches, avoiding rocks and jumping over puddles that there just wasn’t much room left for that negative self-talk that had been such a constant companion while I ran through the city streets. Instead of focusing my attention on how many miles I had left, I found myself amazed by how much natural beauty surrounded me on the trails. The way the light hit the river, the way the sun shone golden through the foliage, the bend of the tall grasses in the breeze, the egrets perched gracefully on the far shore—it was like an entire world I had somehow missed despite living just a few miles away for most of my life.

It didn’t matter so much that I was slow when I was actually enjoying it. I didn’t beat myself up for being mediocre—I actually felt kind of badass every time I hurdled a log or charged through a puddle. When I took my shoes off on my front porch after a run on the trail, muddy and wet and sandy, they felt like a trophy. I had successfully escaped the daily grind, if only for an hour. I had felt the sun on my skin and the dirt under my feet. I had been somewhere and accomplished something, and I had the dirt clods to prove it.

And then a funny thing happened. I got better. I got faster. When I went to boot camp, I could do more burpees than some of the guys. I signed up for the Davis Turkey Trot 10K and surprised myself with a sub-9-minute pace—still slow by most runners’ standards, but a vast improvement from my decade-long identity as a 10-minute miler.

Was my discovery of trail running to credit for all this? Judd Van Sickle, a biomechanical engineer at the Sports Performance Program at UC Davis Sports Medicine, thinks it could be. “Trail running is a little easier on the body (than road running), due to lower-impact forces,” he notes. “More than that, though,” he adds, “it promotes better stability as a result of the uneven surfaces. You will also experience a much wider variation in stride length, joint angles and challenges to balance and core stability that help make a runner more resilient and more economical, whether primarily running on or off the road.”

My hunch, though, is that my improvements in speed and general fitness had less to do with science than they did with fulfillment. I wasn’t just checking a box when I hit the trails. I wanted to be there. It felt like therapy to me: The way the river flowed, the grasses swayed, the trees rustled, the birds soared overhead, and the arc of the sun as it shifted the shadows all around me—it filled me with wonder and gratitude. I was reminded that time is always moving forward, the earth is always orbiting, the seasons always playing out their unique personalities and then gracefully giving way to the next. Nothing is stuck. And I was invited to participate. None of it relies on me; it will all continue to move forward whether I acknowledge it or not. But when I run on the trail, I am part of it, part of nature, all of us in motion, together.

Just a few months after I first stood in the middle of Guy West Bridge and wondered where exactly those trails would take me, I waited nervously at the start line for the Marin trail race that prompted me to consider trail running in the first place. I glanced around at the other racers and felt like an imposter. Their gear was more technical than mine, their legs more toned, their faces calmer. I took some deep breaths and looked down at my shoes. I saw the dirt from my last run along the river, and I smiled a little. I remembered all the miles I had logged there, all the logs I had hurdled and the puddles I had charged. I remembered the feeling of seeing the flowing river and understanding that it was an invitation to join along in forward motion. I felt better.

When I crossed the finish line a little over an hour later, the race MC announced my arrival on the loudspeaker the same way he probably announced every person who finished the race that day: “Crossing the finish line now we have runner Anna Quinlan.”

And for once, the term felt right. I was no longer just a person going for a run. I was a runner. I had the muddy shoes to prove it.