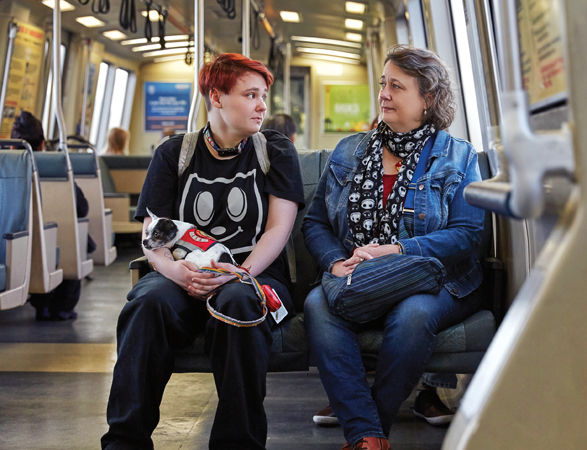 Our partnership with dogs (nee wolves) goes way back to when hunters first realized that dogs’ ability to chase, track, sniff out and hold prey was worth sharing the bounty. As the attributes of dogs have morphed through millennia of breeding, so has our relationship with them. We’ve made them assistants, teaching them to pull sleds, guard property and sniff out explosives. We’ve even made them companions in a way that would probably strike the ancients as odd.

It speaks to the growing consensus on what’s known as the human-animal bond, a relationship between people and animals that is beneficial to the health and well-being of both. So it is not surprising that mental-health professionals are increasingly considering the therapeutic value of animals.

Meet Danielle– Danielle Rodda, now 21 years old, began having panic attacks when she was 7. She was diagnosed with anxiety disorder, followed by extreme depression and borderline personality disorder. It made having a normal life “next to impossible,” says Danielle’s mom, Gina. “There were entire years where we couldn’t go anywhere or do anything.”

The family had always had big dogs around the house, but when Danielle was in her early teens, they bought a Boston terrier-Chihuahua puppy they named Holly. The bond between Danielle and Holly didn’t form right away, but when it did, the result was transformative. “Holly sensed when Danielle was about to have a panic attack and would distract her at just the right moment by getting in her face and licking her,” says Gina. “It was really the only thing that worked.”

Having Holly enabled Danielle to do things she never could have done otherwise. She went on public transit by herself. She started going to school. And on her own, Danielle went to her doctor and sought the documentation that would secure Holly’s status as an emotional support animal.

So What Are Emotional Support Animals?–“Emotional support animals” and “service animals” are both legal designations that expand upon the usual liberties extended to everyday pets and pet owners. While this is a boon and a comfort to many, it is also a source of frustration and skepticism to some, because the distinction between these labels, the means of proving their status, and the rights accorded to them are fuzzy to most people.

More recently, service-animal duties have expanded to suit other types of disabilities, including diabetes and epilepsy. For individuals with PTSD, for example, service dogs can be taught to detect and alleviate distress by nudging, pawing and leaning. They can even assist a person in waking from night terrors. However, this kind of specialized training typically requires considerable investment in time, money and expertise.

Emotional support animals (often abbreviated ESAs) need not have any particular training. However, the owner must have a verifiable disability as stipulated in a letter from a mental-health professional declaring the animal necessary for the emotional health of the patient because its presence will mitigate their symptoms. ESAs are usually dogs, occasionally cats, but may include just about any pet provided they do not impose a direct threat to the health and safety of others.

Incidentally, there’s a third category: therapy animals. Their primary purpose is to provide affection and comfort to people in hospitals, retirement homes, nursing homes, schools, hospices, disaster areas and so on. They have no legal status, but nonprofit organizations such as Pet Partners have developed standardized training and evaluation programs to ensure proper behavior.

What Rights Do They Have?–The rights accorded to these animals hinge on a mishmash of laws and precedents that have evolved during the past few decades. The details get a bit convoluted, so for the sake of brevity, I’ll summarize.

The Fair Housing Act forbids housing discrimination against the disabled. Generally speaking, owners of both service animals and emotional support animals must be granted an exception to “no pets” rules.

The Air Carrier Access Act requires that airlines accommodate disabled people. They must allow a person to travel with their service animal or emotional support animal, usually on the passenger’s lap or in a carrier under the seat, so long as the animal is not a danger to others or interferes through unwanted attention, barking or, ahem, “inappropriate toileting.” One additional wrinkle: The Air Carrier Access Act forbids airlines from charging extra for the animal’s transportation—thus introducing an incentive for unscrupulous but otherwise neurotypical pet owners to dissemble.

Finally, the Americans With Disabilities Act makes it legal to bring service animals (but not emotional support animals) into nearly any public place provided it is well-behaved. There are a few exceptions. A seeing eye dog, for example, should be allowed to accompany its owner in the serving area of a restaurant—but not in the kitchen, where food is prepared and special clothing and sanitation procedures are required.

How Do Owners Prove Their Animal’s Status?–This is the sticky part. To prove you are of legal drinking age, you can show the bartender your government-issued ID. Easy. But in the case of ESAs and service animals, there’s no government registry, ID or legal certification process.

If you approach a business and identify your companion as a service animal, privacy laws forbid the business owner from asking what the disability is. There are only two questions allowed. The first is “Does the dog provide a service?” The second is “What has the dog been trained to do?” There’s no real proof to offer, other than your word. The owner can deny access only if the dog misbehaves or disrupts.

Did you know about these rules? Neither do most people. But what you probably have seen is dogs of all breeds wearing cute vests with official-looking lettering, leading their owners in unexpected places. Many—perhaps most—are fakes, whether the owners know it or not.

Beware the ESA Gray Market–Growing awareness of emotional support animals has spawned an online cottage industry ranging from vaguely unethical to outright fraudulent. When you Google “emotional support animals,” there displays a long list of businesses that promise to set you up fast with all you need to take your animal flying for free.

Some of these businesses offer to put your dog’s name on the Emotional Support Animal registry. (There is no such thing, apart from whatever mailing list they keep.) For an added charge, they’ll sell you certificates, tags, vests and collars. None of it has any legal currency.

Other businesses invite you to take an online quiz, and if your answers make you sound vaguely depressed or anxious, their “licensed therapist” will issue you an ESA letter (or placard or whatever), along with a bunch of other doggie accoutrements at a sharp markup. And if you can’t be bothered to jump through those hoops, you can just buy your vests and tags on Amazon.

How This Plays Out in the Real World–One guy I met in an art venue with his vested little fluffball explained that the pretense was not for his own sake but for his dog’s. “She’s very anxious. I can’t leave her at home or she freaks out,” he explained.

What he says is partly true. But for the record, in 18 states including California, it’s illegal to knowingly misrepresent your dog as a service animal.

Business owners, bus drivers and the like often don’t know the rules about what constitutes proof, what ESA rights are, and what they can or cannot ask. Wary of legal jeopardy or embarrassment, they often wave the vested pets in rather than worry about getting sued.

Of course, most of these scofflaws have benign intentions and just like to take their dogs places. But the legal ambiguity and widespread flouting of the law has had consequences for the people who rely on their animals most.

Taking Their Chances, Making their Case–Remember Danielle and Holly the terrier-Chihuahua? When she and her family discovered the life-changing benefit of Holly’s panic-attack prevention capability, they worked tirelessly to train her for maximum obedience. Danielle’s mom, Gina, then sought to get Holly certified as a service animal so they could be assured access wherever they go. However, she found that there is no government-recognized certification program.

So they made do with Holly’s ESA letter and the training they’d instilled in her, but they sometimes found that wasn’t enough, and that gatekeepers of public spaces were often wildly inconsistent with what they would allow. They were once denied entrance at a concert hall, then watched another family get admitted with two puppies as “emotional support animals in training.”

Then there was the time at the airline ticket counter. Holly and Danielle had successfully flown on the airline three times in the past, but on the fourth, an employee denied the validity of the doctor’s letter because of one word choice. (The letter said that Danielle “should” be with Holly, rather than “must.”)

Gina insists that Holly is hardly different from a PTSD service dog, but it’s just her word against others. “People say, ‘That’s not real. You can’t prove it is a real service dog,’” says Gina.

Kelvin Limm, founder of Folsom-based Dog Training for Owners, has been an animal behavior specialist for more than 30 years. He frequently gets requests from people like Gina wanting their dogs certified as service animals. He is careful to remind them that, by definition, a service dog must not only perform a disability-specific task but also be well-mannered and obedient around strangers, children and other dogs.

“We will evaluate the dog and run it through a test that’s similar to the therapy-dog test, as well as verify that the dog performs a disability-related task,” says Limm. If it meets all the criteria, he’ll issue a statement on letterhead that says so. Limm is clear that this is not a government certification because there is no such thing. But written validation from reputable third parties carries more credibility than verbal insistence, so Limm’s company provides these certifications to help these conversations go more smoothly for owners of true service dogs.

Gina finds the legal limbo frustrating, but she blames the fakers more than the gatekeepers. “These online ESA businesses . . . and the vests . . . they’re a joke.” And yet, to streamline the process, Danielle has Holly wear “the stupid vest” because it works 90 percent of time. And until a better system comes along, that’s all they can do.

Catherine Warmerdam and Photography by Gabriel Teague - January 18, 2021
Near me
40 miles