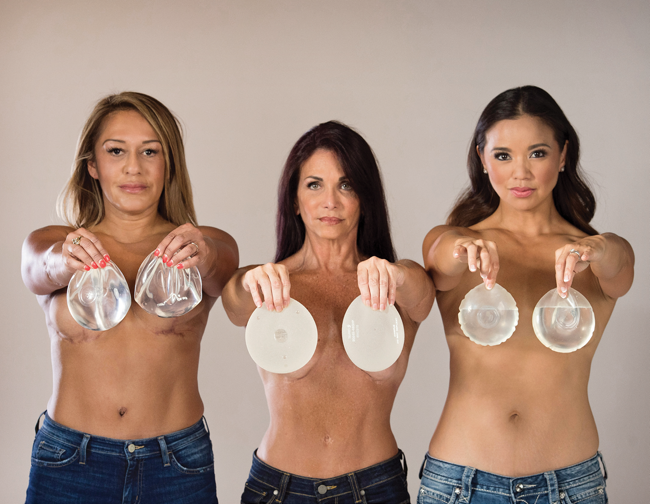 It’s a truism that’s far older than the iconic Pamela Anderson: Big breasts have long signaled sexiness, fertility and femininity. Of course, they have also signaled back and shoulder pain, difficulty finding bras and clothing, and trouble exercising, but hey. We have been taught to accept that beauty has a price, whether it’s monetary (the cost of regular highlights), time (the process of “getting ready”) or pain. (Waxing and walking in high heels both come to mind.)

We have even normalized being cut open and surgically altered to enhance our appearances, with breast implants gaining popularity and regularity year after year. For some, they may bring increased confidence and happiness—this is the success story that everyone assumes they will have. But the reality is often different. Some of us never grow comfortable with the new look, and others discover that it only causes them to find more perceived flaws that need to be “fixed.”

There are also thousands of women linking the onset of a constellation of symptoms, ranging from fatigue and joint pain to gastrointestinal distress and autoimmune diseases, to their implants. They believe that their bodies are fighting the implants as foreign objects, and they come to find that the surgery that was supposed to help their body image may not have been as safe as they thought it was. In fact, they think that it poisoned them. Three local women each had their implants for more than a decade before finally deciding that the price of their health was one they were no longer willing to pay in order to look a certain way. And, after getting this weight off their chests, they’ve never felt better.

MARIA KANG
Maria Kang was 23 and objectively beautiful: She was the first Miss Philippines Sacramento and had just been crowned Miss Philippines USA. Petite and competitive, there was only one answer when the two people she trusted most—her mother and her pageant director—suggested that she get breast implants to help her career: yes. She switched from beauty pageants to focus on competing with her physique and immediately won Miss Bikini California, later placing in the top five for Miss Bikini America and landing on a handful of magazine covers. Her enhancement was subtle, just giving her a full B cup, but already, Kang had her doubts. “I was ashamed immediately because it didn’t feel like they fit me—they felt very foreign,” Kang says.

Constant chest pressure was the first thing Kang recalls that started to bother her. Then there was the joint pain and the fatigue. She found a new “normal” routine: regular visits to a physical therapist who would help break up the scar tissue and collapsing in bed by 8 p.m.

It was fine until, one day, it wasn’t. That day, she was on a flight to Croatia for a leader retreat with No Excuse Moms. She wanted to be excited, but her enthusiasm for the meet-up was clouded by exhaustion and pain. Before she landed in Europe, Kang resolved to remove the implants that she suspected might be causing her the symptoms and, regardless, represented a message that she no longer wanted to share.

After her initial implant surgery, she suffered from a hematoma (when the wall of a blood vessel, artery, vein or capillary has been damaged and blood leaks into tissues where it doesn’t belong). She suffered from another hematoma as a result of the explant surgery, which required emergency surgery to repair. She remained bedridden for two weeks.

Seven months have passed since then, and the chest pressure, joint pain and fatigue are gone. And as for her new reflection? “It looks like I’ve nursed three kids, which is how it should look,” Kang says. “It’s an evolution of health. I don’t care how I look; I just want to feel good.”

SANDRA AUGUSTIN
At 43, Sandra Augustin was in her prime. A professional fitness competitor for 20 years, she gravitated between 10 and 12 percent body fat. She could deadlift 220 pounds—nearly twice her body weight—and do splits as well a front handspring. The fitness competitions were twofold: In addition to performing a physical fitness routine, she showed off her hard-earned physique in a bikini. One day, when she was changing backstage, a woman saw Augustin’s naked breasts, which were small and had begun to sag, and made a comment that stung: “Aw, my boobs did the same thing after I had all my babies,” she told her. The thing is, Augustin didn’t have any children.

The most tiring thing about it all, though, was toting around the stack of pads she was constantly stuffing her bikini with to prop up her cleavage for the stage. Augustin started to think implants would make her career easier and ensure her body stacked up to her younger counterparts on the stage. In fact, after she got them, she never competed again.

The first injury happened almost immediately: Six weeks post-op, Augustin pulled a hip flexor in a squat during her first workout. Maybe, she reasoned, she was just out of shape after taking time off. Then there was a torn hamstring and a dislocated shoulder. Then a torn rotator cuff during a jump-rope warm-up. A dislocated rib. Elbow tendonitis. In a matter of months, she had fallen from a fitness guru to a woman who could barely straighten her arm. “I couldn’t even brush my hair,” she recalls. “I couldn’t carry groceries or walk my dog.”

She wanted the implants out entirely, but there was another complication: her husband, who liked the way they looked. She compromised and went for another type of implant, this time choosing over-the-muscle textured implants instead of the under-the-muscle ones that had brought her so much pain. The injuries and joint pain stopped, but were replaced with something else: inflammation.

“I started getting infections,” Augustin recalls. “There were little hot spots, circles on my breasts, directly over the implants, and pockets of fluid on my belly.”

She took a round of antibiotics for the infection, and things cleared up. But when the circles appeared on her breasts a second time, she gave up. “I just wanted them out,” she says.

It wasn’t quite that simple. In addition to removing the implants, her surgeon removed more than two pounds of scar tissue that ran from her sternum to her groin. Because the scar tissue was attached to her abdominal skin, that skin also had to be removed. In its place, skin from her back was pulled and stretched to cover the front of her torso. For the first three months post-surgery, Augustin couldn’t even hold onto her walker. Instead, she used her elbows to steer the device. At the six-week mark, it was the first time that she was able to stand up straight.

But the long road to recovery was worth it: Her symptoms have all vanished. “I feel like I’m back in my 30s again,” Augustin says.

DENYSE VELAZQUEZ
Denyse Velazquez had a naturally small frame. It didn’t really bother her—actually, she liked her breasts—until her mid-30s, when she started to feel like her chest was getting flatter. The former group exercise manager for 24 Hour Fitness was also no stranger to fitness competitions, where most competitors opt for implants. “I thought, based on everyone else doing it, I’ll just do it, too,” she recalls. It was so normalized that it was perhaps rarer not to have them.

She opted to take her 32B breasts to a D-cup, thinking she’d finally get a chance to show them off. In reality, she found that it was more challenging trying to find clothes that fit, and she never grew comfortable with her new chest. Instead of flaunting them, she covered up more than ever before and, due to the immense scar tissue she developed, she felt that they never settled properly and their shape was distorted. She might have considered removing them, but the thought of another expensive surgery and post-op recovery deterred her at first.

Then came the fatigue. She started researching online and realized that she wasn’t alone—and the fact that her only symptom was fatigue made her one of the “lucky” ones.

But Velazquez started to worry about the future. While her implants hadn’t tormented her the way they had other women yet, it was the “yet” that she didn’t want to gamble on. “Based on my age, I didn’t want anything to interfere with having a healthy life,” she says. She sat down to talk to her mother about it during Christmas, and while she had initially just intended to get a second opinion, she quickly realized that she had already made up her mind. “Once I said it out loud, that I wanted them out, I couldn’t do it fast enough,” she says. She scheduled an appointment to have them removed two weeks later.

She had a fortunate recovery, too, being bedridden for only two days. Today, she says that the scars from her explant procedure don’t bother her in the slightest. “I really am just happy that they’re gone and it’s one less thing that I have to worry about healthwise,” she says. “It’s funny because you look back [to deciding to get implants] and you think, ‘What the heck? I looked great. That wasn’t even needed.’”