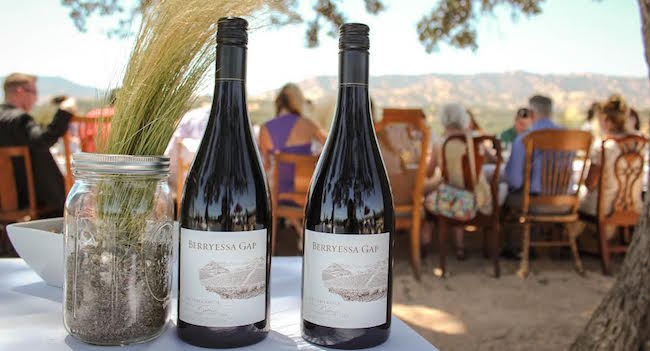 Berryessa Gap Vineyard, situated on a picturesque 45-acre plot in Winters, and its winemaker, Nicole Salengo, are on a vino crusade to make Western Yolo County a force to be reckoned with in the wine world—and they just pulled off a major coup: a fantastic rare ice wine.

The excitement was palpable at the Coble Ranch vintage release luncheon this past Sunday as Salengo, who received her certification as a winemaker from UC Davis’ renowned oenology school, unveiled the rare dessert wine, pairing it straight from the barrel with the fourth and final course—locally sourced strawberries and Straus cream with French vanilla macaroons.

With a hint of oak lingering under the sweetness and brilliant fruity notes, the silky ice wine, which requires very precise conditions to create, was beautifully balanced. Created when grapes freeze on the vine, which concentrates the flavor and sugar, ice wine is a rare breed, particularly in the more moderate climates of California. Producing the wine is a gamble against nature, and can result in incredibly low yields. But after a stretch of frost came one week after harvest in 2013, the young and energetic Salengo made the bold decision to immediately harvest and press the remaining grapes for an ice wine, and was rewarded with the prized gem, which she plans on bottling in February.

The dark, fruity vintage also paired well with the second course, which consisted of grilled Wolfe Ranch quail, potato gratin, green beans with winter savory and grilled figs. Buckhorn chef Shane Lillard grilled the green beans immediately before serving them, and seasoned them to complement the gamey flavors of the quail.

After a palate-cleansing intermezzo of cucumber and tarragon gelee, guests were treated to a European-style third course, featuring aged tinto and gouda prepared by local cheesemaker Sacha Laurin, with a light and fresh green herb salad with champagne vinaigrette. The citrus and floral notes in the 2014 sauvignon blanc served with this course affirmed Berryessa’s skill with whites, which had been established earlier that day by the 2014 verdejo served to arriving guests.

The limited-release verdejo is a delightfully light, clean and refreshing Spanish varietal with bright fruity notes—a perfect wine for warm summer nights spent relaxing on the back porch.

As the relatively new reputation of Yolo County as a hot spot in the wine scene continues to emerge, Berryessa Gap Vineyards is ensuring it stays on top with bold choices, masterful blends, and a niche piece of geography perfectly suited for producing beautiful Spanish and Iberian wines.

“People don’t realize the quality that can come out of this area,” Salengo had said before the tasting.

But rest assured, that won’t be the case much longer.